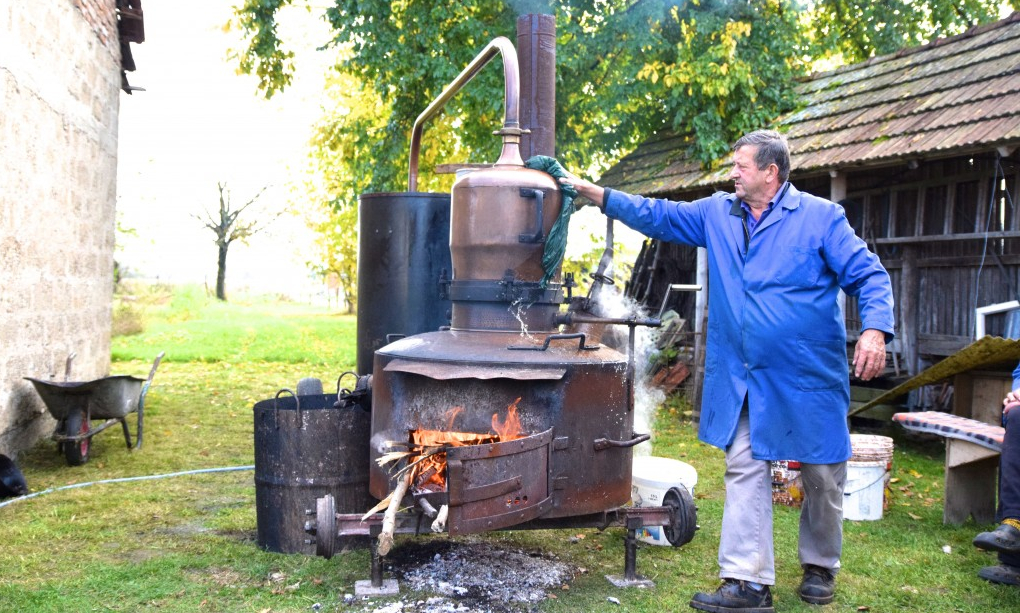 In the middle of October, when the sun still spread around its warm rays, my father and a  few neighbors would gather in the backyard of our house to make rakija.

Rakija was a “fire water”, as some Chinese tourist who had come to Serbia and tried this  traditional Serbian alcoholic drink had said. I tried it many times under the influence of the grown-  ups who claimed that it killed all bacteria, germs, viruses, calmed a toothache and reduced a fever.  But, honestly, I didn’t like it. It was so strong that once you sipped it and you had it in your mouth,  you could feel its stinging drops spread all around the walls of your mouth cavity like a tiny  needles. And when you swallowed it, the warmth would spread so fast through your upper body that  in a few seconds you felt the heat which skyrocketed your temperature to a thousand degrees. And  you would start sweating as if you had been in a sauna. Your legs would feel weak and shaky and it  was better for you if you didn’t attempt to walk for a while, otherwise, you would probably end up  stumbling down and kissing the ground.

Anyway, my family and all other Serbs believed that rakija was a cure for everything. No  medicine could surpass the healing effects of rakija. Also, no other alcoholic drink could cause  weirder hallucinations than rakija. Our neighbor Stevo was fighting with anacondas after he had left  the local kafana (a local Serbian bistro or pub) and he was so engaged in this fight with huge snakes  that he ended up stopping the traffic on the main town’s street since that was a battle field. My  cousin Vera got so drunk once that she believed there were fairies asking her to climb up the tree  and join them. Vera climbed up the tree and after five minutes, she ended up on the ground again,  falling directly on her butt. She couldn’t sit on it for almost three weeks after this had happened.

That warm October day, after playing on the street with other kids from my neighborhood, I  came back home feeling weak. It was a warm autumn day, bathed in golden and red, with all those  leaves falling down from the trees and crispy but pleasant mornings. The enjoyable warmth made  people in my hometown wear summer clothes, short and T-shirt, but that day the hairs on my body  stood up and I got shiver down my spine. The cold chills turned into shaking and I ran into my yard  feeling sick.

When I opened the gate, I felt a sweet fruity smell of ripe plums. It permeated the air in our  yard. It was delightful and provoked me to think about sweet purple plums. But no matter how  compelling the sweetness of plum was, I was not feeling hungry. I went to the backyard and I found  my dad and our two neighbors there.

They gathered around our kazan (a still) and chatted. The three of them were holding small  shot glasses and, of course, tasting rakija in the making. Needless to say, tasting rakija, again and  again, while trying to make the best version of it, was obligatory. Not to mention that at the end of a  day, all tasters were usually so drunk that they couldn’t tell the difference between my sister and me.  And my sister and I were very different. They would wish Marina good night saying: “Good night,  Lena.” And I would be petted on my head with the words: “Marina, you are growing up so fast. You  will be taller than Lena. I guess it was necessary to mention that I was four years older than my  sister Marina and much taller.

That afternoon, I bid them good afternoon and told my dad that my head was burning and  that I felt strange. Everything was spinning around and I was getting dizzy. He stood up from his  stool, left his precious shot glass on a small round wooden table and approached me. He pressed his  warm sticky palm that spread the fragrance of rakija on my forehead and kept it there for a few  seconds. Then, he said: “You have a fever. Go to Nana. She will prepare the best medicine for you.  You will feel better after a couple of hours. When I was you age, I never went to a doctor. Nana was  my doctor. Thanks to her I easily recovered from chicken pox, shingles, fever, flu.”

Nana was my grandma. Her real name was Lena, the same as mine, but in Serbia, we usually  called our grandma “Nana”, if we liked her. If we didn’t like her, we would address her  “grandmother” and avoid her as much as we could. My sister and I had always called my grandma  “Nana”. I guessed it showed our love and adoration for her.

I entered the house feeling pretty lightheaded and woozy. I felt that a terrible weakness was  seizing my body. I began to suffer some dizzy spells. Everything around me was moving. I found  Nana in the kitchen. She was making pancakes. Sweet vanilla and spicy cinnamon smell lingered in  the air. Nana offered me a pancake with delicious apricot jam filling. My favorite. When I refused,  she looked at me in surprise and said: “You are not feeling well. You look like a ghost and you don’t  have an appetite.” I nodded.

“Come here.” She said in a demanding tone of voice. She left her artistry of making  pancakes and headed toward the bedroom. I followed her. Then, she told me to take off all my  clothes while disappearing through the door that led outside to the backyard. After a minute, she  came back carrying a bottle of rakija. I was confused, but I was so weak that I didn’t have strength  to ask questions and demand explanations. And I believed she was an expert and had a gift of  healing. Soon after, she told me to lie down because she wanted to massage me with rakija. I  obediently did what she had said. I was feeling cold and my arms and legs were shaking. Those  strange chills were ruling over my body and I felt as if I had been lying naked on an iceberg.

Nana poured a bit of rakija in her palms and then she started massaging my shoulders, back,  arms, stomach, lower back, legs and feet at the end. My body was heating up and I was comfortably  numb. After Nana had finished massaging me, she grabbed one towel from the drawer, soaked it in  rakija and put it around my neck. She told me to go to bed and try to sleep. I compliantly did what  she demanded. She told me, also, not to remove the rakija-soaked towel from my neck. When I lay  down, she covered me up with the cotton sheet and promised me that I would feel better when I  woke up. She kissed my forehead and went back to the kitchen to finish her pancake art.

The room was filled with the strong smell of rakija and even though I had never liked it, I  felt that it was making me feel better. I was sleepy, my eyelids heavy and they began to droop. I was  half-asleep for some time and eventually I fell asleep.

Not sure how long I was sleeping but when I woke up, it was pitch dark outside and I could  see the carpet of starts through the half-open window.  I smelled of alcohol. Rakija left its aftersmell  all around the bedroom and even though I was not drinking it, I inhaled it and it made me a bit tipsy.  But miracle! I was feeling better. No cold chills were running down my spine and my hands and  legs were not shaking anymore. My forehead was not burning either. I finally removed the towel  from my neck that Nana had soaked in rakija earlier. It was almost dry. I uncovered myself to cool  off since it was pretty warm in the room. I put my T-shirt and jeans on and went to the kitchen.

Nana was sitting in a rocking chair and watching her favorite Latin soap opera where every  minute someone cried and yelled. And the actors used a lot of gestures and talked too loud.  The big pile of pancakes were on the table waiting for me. And I was so hungry. When Nana saw  me, she stood up and hurried up to touch my forehead. Her smile assured me that my fever had  gone. Then, she made me seat at the table and she rolled few pancakes for me. One had my favorite  apricot filling, the other one ground walnuts and honey and the third one was filled with brown  sugar and cinnamon. I ate ravenously. And I knew I would not stop after the third pancake. My  Nana was happy to see that my appetite had returned in full force.

When I finished the sixth pancake and there was no room for more, I lay in bed and watched  the soap opera with Nana.

Outside, my father and neighbors got to the stage where all of them were singing and  laughing and I knew that soon the neighbors wives would come to look for their husbands. Rakija  really worked miracles with my fever. And obviously, it did performed wonders with the grown-ups  as well. It brought them back to their childhood. Once they overdosed on rakija, they forgot about  their stupid serious political arguments and complaints. You couldn’t hear them talking about low  salaries, high prices, ridiculous taxes, corrupted government, bad bosses and a lot of work. All you  could hear was laughing, jokes, singing. Sometimes, when they continued their hanging out with  rakija until late at night, they would even play games: hide and seek, hopscotch, jump rope or  monkey in the middle. Then, I would sneak out of my bed and through the window overlooking our  backyard, I would watch them and laugh. Those were hilarious scenes. I couldn’t remember any TV  show that was funnier and more interesting. And those were probably moments when I liked grown-  ups the most.

Nightingales wake me up on a warm summer morning. The curtains wide open let the sun rays play with my hair which rests lazily on the pillow. I go outside and breathe in the dew-filled air. The soft music of leaves dancing with the light summer breeze complements lovely chords of the nightingale song. My nostrils are filled with the strong fragrance of frangipani. Yellow frangipani flowers and purple bougainvillea are my companions every morning. I walk through the garden and touch their petals. Soft, silky and fragile. They caress my palms and fill my body with some strange tenderness. The pleasant goose bumps show up on my skin and enjoyable chills run down my spine. I breathe in deeply and let all my senses enjoy these miracles of nature. Those tangible and those imperceptible. They are the real beauty of this world. And even if we sometimes forget about them carried by the hustle and bustle of everyday life, they are always there impatiently waiting for us to notice them. 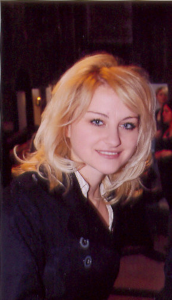 Ana Vidosavljevic from Serbia currently living in Indonesia. She has her work published or forthcoming in Literary Yard,  The Caterpillar, The Curlew, Eskimo Pie, and Indiana Voice Journal. She worked on a GIEE 2011 project: Gender and Interdisciplinary Education for Engineers 2011 as a member of the Institute Mihailo Pupin team. She also attended the International Conference “Bullying and Abuse of Power” in November, 2010, in Prague, Czech Republic, where she presented her paper: “Cultural intolerance”.  More at: http://www.anascorner.co/