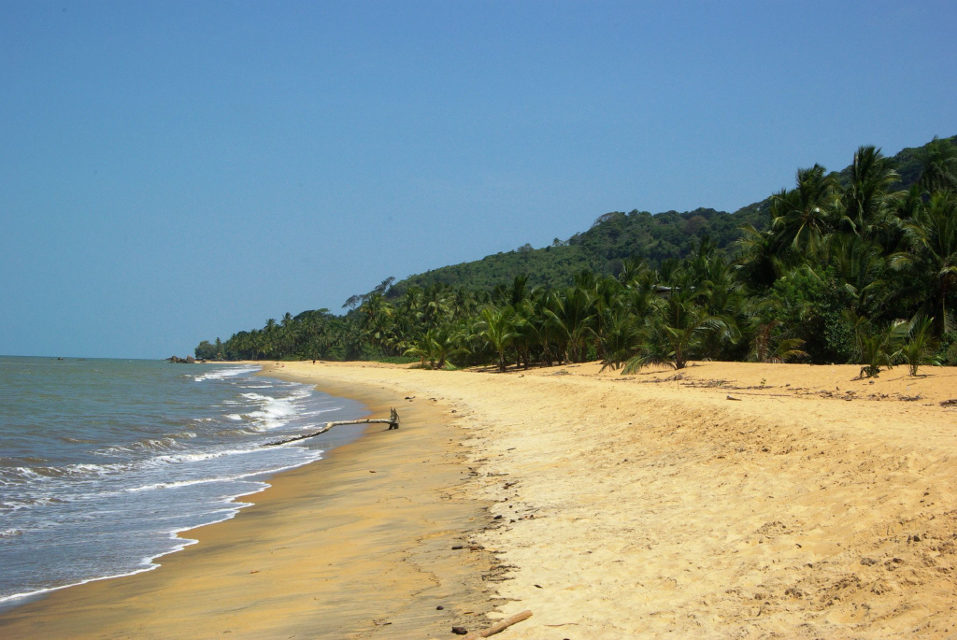 The light struggled to escape from the sallow orb of a street lamp. Dulled by ocean spray, its faint beam lit up the mural on the crumbling wall. A smiling turtle with a sparkle in its eye walked over golden sand carrying a bindle with the word Guyane.

A few meters farther and the artificial light was gone, but there was no mistaking where we were. A cool breeze whipped over the dunes, bringing the taste of salt. My eyes were drawn to the black sea, a silver strip dividing it in two beneath the moonlight.

Hand-in-hand we strolled toward the firm sand and headed left in the direction of bobbing red lights. I turned my face toward the waves, contemplating their silence. They weren’t the bold, crashing waves of the Pacific, but the kind that rolled gently onto the beach, only to die within a few feet.

I have always found that wherever you travel in the world, residents are proud of their beaches. So when French Guiana claimed to have the most beautiful, uninhabited beaches in the world, I’d taken it with a grain of salt. They don’t have the crystal blue waters of the Caribbean or the glittering golden sands of Australia but with makeshift shelters, swings, and volleyball courts made from driftwood logs and palm fronds, they are the sorts of beaches that entice you to explore every inch of them. They also have turtles. Giant female leatherback turtles, which is the reason we were there.

My fascination with turtles began when I was six. One bright Sunday morning, my father and I were paddling off Queensland’s coast. Sitting on his double surf-ski, pushing through the breakers and bobbing over gentle swells, my scrawny arms flailed about, making the blades of my oversized paddle dip haphazardly into the water.

We were headed toward the shark nets, five hundred meters from shore. I was the lookout, tasked with searching for anything caught in the net.

Shark nets were introduced to the Gold Coast of Australia in 1962. Contrary to popular belief, these nets aren’t barriers installed around the beach but are simply designed to snare passing sharks. The theory is simple: fewer sharks, fewer shark attacks. Nets were better than mounting machine guns on the headlands or using explosives, both serious alternatives proposed at the time.

“Dad! Over there. There’s something caught in the net.”

I gazed down into the eyes of a green sea turtle trapped a meter or two below the surface. One wing-shaped flipper brushed against its wrinkled head and pushed back against the water. The other front flipper and one rear flipper were caught in the net. The rope had bitten deep grooves into its flesh, proof it wouldn’t have untangled itself.

“Lucky you spotted it,” said Dad. “Without air, it would’ve drowned.”

He plunged into the calm blue sea and swam toward the injured animal. At first, the turtle raised its head and thrashed its front flipper. But then, as if sensing what Dad was going to do, it blinked a few times and seemed to relax.

“Quick, Dad! Untangle it. It’s going to drown.” I started to cry.

When Dad cut away the last rope, the turtle took a few strokes as if to test its flippers. It lingered on the surface for a moment, before turning toward us. Perhaps it was taking a moment to gain its equilibrium, but to a six-year-old, it had turned back to thank us for saving its life.

The turtle took a deep breath, tilted its head downward, and with one powerful stroke vanished into the dark-blue ocean depths.

“Turtles have good memories,” Dad told me. “It will remember you helped it.”

My boyfriend and I walked alongside an ocean that seemed to have gone to sleep. It was so calm we could have been strolling beside a lake. When we reached a group of people gathered on the beach, I saw the silhouette of a turtle easily ten times my weight. I rummaged in my shoulder bag for my head-torch and selected the red LED setting.

The turtle had a head the size of a football, and as she went about her business, her gentle, shiny black eyes dripped like leaking taps.

“We say they cry because they never see their babies,” a local woman told me.

The turtle had surfed in on a high tide so she didn’t have far to heave herself up the beach. I walked behind her circling tracks that looked like a tractor had emerged from the sea. Every ten strokes or so, she stopped to rest.

Settling on an ideal spot, she carved out a body cavity for herself using her front flippers. Then, with rear flippers that worked like slow-moving rotor blades, she dug out an egg chamber. Every so often she stopped, looked into the moonlit sky, grunted, panted, and then, after a huge gulp of air, started digging again.

When she did this for the third time, I stepped forward, wanting to help.

“Remember the twenty-metre distance rule,” my boyfriend said, standing within collar reach should I lose control. He continued talking in hushed tones to a young couple who explained that it is a rubbery shell that prevents the eggs from cracking when they fall into the hole.

After the turtle had laid dozens of billiard-ball-sized eggs, she back-filled the hole by moving her body from left to right, and tamped down the sand using her rear flippers. Then, with her front flippers, she threw sand around in a clever maneuver to disguise the nest. With what seemed to be her final burst of energy, she forced her huge bulk into a quarter turn and returned to the sea, without even a backward glance.

This turtle had migrated thousands of miles and remembered to return to the beach where she herself had hatched. Could she also remember the effects of the ocean currents on her as a hatchling? Why had her ancestors laid eggs on this particular beach, once mangrove flats but now lined with houses? She had the answers if only I knew how to ask.

The following morning I ran to the spot where she’d nested. I found no trace. I walked along the beach looking for other nest sites and found a lot of broken turtle eggs scattered about.

Black vultures, stray dogs, and humans are the three main threats to the leatherback. People are tolerant of the birds of prey, but local residents have been told to keep their dogs off the beach or risk them being impounded.

The human threat is mostly from fishermen who use over-sized nets or leave ghost nets drifting in the sea. Not to mention plastic bags that when left floating in the water, are confused with jellyfish, the main food item of turtles. There are indigenous people who defend their right to eat the eggs, and sadly, a small element of rum-swigging imbeciles who think it’s acceptable to ride a turtle into the sea.

Two months passed; it was dawn and hotter now. Orange hued rays radiated across the sand and transformed the blackish sea into a metallic gray. A warm breeze hinted at a blistering day ahead. I slipped my fingers through the straps of my sandals and headed off to where I had seen the nests.

A fisherman wearing only shorts cast a line into the sea. I ducked below his fishing line, wrinkling my nose at the smell of fish guts. I was surprised by his choice of shoes. A new pair of fluorescent coral-colored modern runners. I glanced at his face, a portrait of leathery skin wrinkled beyond its years.

A little farther along something resembling a leaf fluttered across the sand. It was a baby turtle hurtling toward the sea. At a respectful distance, I sat back on my heels, mesmerized by the sight of others scurrying across the sand. They looked like tiny, mechanical, wind-up toys. A yapping, scruffy dog appeared from nowhere. It dashed past, flicking sand into my face, and pounced on a baby turtle. I was on my feet in an instant, running in hot pursuit.

Waving my arms around, I screamed, “Drop it!” The startled dog turned and looked at me, tucked its tail between its legs, and bolted back toward its owner.

It dropped the turtle at its owner’s feet. “Bad, bad dog!” the owner said.

I scowled and fought the urge to shout, “Bad, bad owner! Put your dog on a leash.”

Marching back to the car I cursed under my breath. When you have saved a turtle from drowning, and looked into the eyes of another laying her eggs, their safety becomes personal. I needed to cool down.

The car bonnet was hot. I dangled my legs over the edge as I did when I was small, but now I irritably kicked the bumper. I closed my eyes and drew in a lungful of ocean air. The breeze was enough to blow an errant strand of hair, an unseen part of the ocean that conjured up memories of childhood summers when my tiny hands gripped an over-sized paddle. And I thought about the turtles, how they deserve space to roam safely from place to place, just like you and me.

Humans have an inner compass that guides them toward beauty. The Japanese have two words for it, kachou fuugetsu which literally means Flower Bird Wind Moon but commonly translates to “experience the beauty of nature, learn about yourself”.

When we become separated from nature, consider ourselves superior to it, or somehow fail to notice it, it is us, not nature who is diminished. A hummingbird hovering over a heliconia, an ancient sea turtle lumbering over sand dunes or a dandelion flower dispersing its seeds into the wind remain for all of us to see, depending on our level of engagement.

Beauty counterbalances the suffering and craziness of our world. We need to surrender our senses to that: Gaze at the sky, listen to the ocean, and smell raindrops falling on dry earth. Feeling a gentle breeze brush across your cheek or humming along to early morning birdsong—that is where beauty is. It isn’t a place, but a way of looking at things. 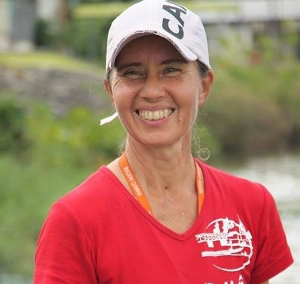 Donna Mulvenna is the author of Wild Roots – Coming Alive in the French Amazon. In her ramblings she hopes to offer a glimpse of the wonder of the Amazon, reveal its profound effect on each of us, and inspire readers to build a connection with the natural world. When not practicing horticulture, she reads from her sea kayak off the coast of the Atlantic, or hurtles along the Amazon’s wild rivers in a sprint canoe. More at: donnamulvenna.com.