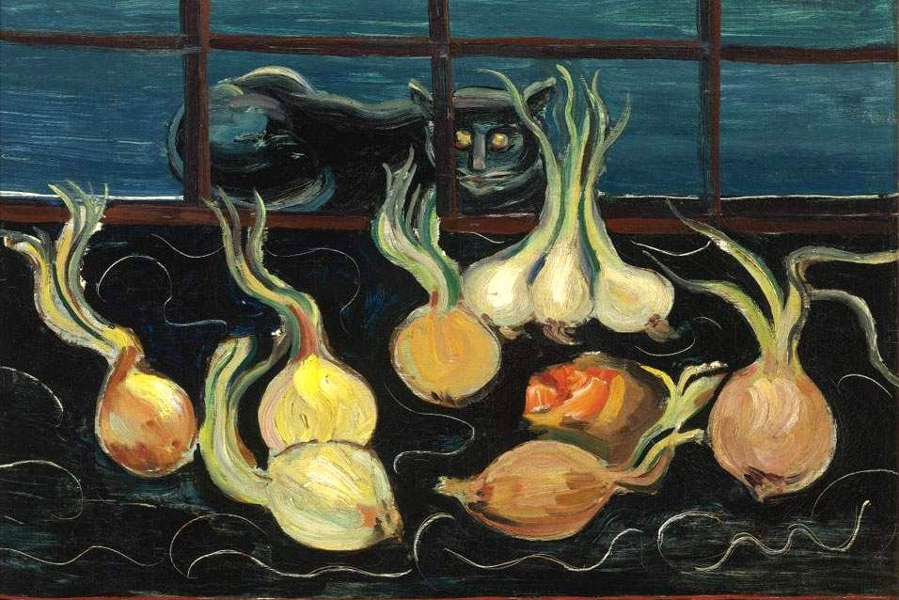 A Cat Sits Under the Moon

A man sings exuberantly in Spanish
up on the roof across the street.

The world as I know it doesn’t exist.
A swimming pool takes up the old yard
filled once with the blue of delphiniums
and the red of roses; and a plum tree dropped
its little bitter fruit.

Looking through pictures I’ve saved:
a woman with a gaping hole
where her heart should be, a stream
gushing out of it.

Another woman cut from a newspaper
leans out a window, elbows on the sill
looking to the right “in the soft light of Italy.”

And a cat sits under the moon.

This is the Place

My God! It was here in the hospital basement.
Where I lie in a hospital cubicle.

Where someone took me down to the basement.
Where the mummified anomalies were stored.

Where then I worked in the rooms upstairs.
Where I typed up what the doctors dictated.

Where someone took me down to the basement.
Where they showed me anomalies in glass jars.

Where nurses and doctors are now, out there.
Where the saving machines hem and haw.

Where I lie in a cubicle, a transom for light.
Where we’re all arrayed in a circle of cubicles.

Where nurses and doctors sit and stand, out there.
Where the saving machines hem and haw.

Trees have no politics. They shrug off
green and take on crimson and russet.

At the clinic a family rushes to the elevator
from the parking lot. Daddy
pushing Mommy in a wheelchair.

“Daddy, you’re so big!” says the little girl
as they all sidle into the elevator going down.
“Daddy will always be big,” I pipe up.

I haven’t seen Daddy
since I was three. Outside on the street

liquidambar and Chinese pistache
and the translucent egg-yolk yellow
of the gingkoes.

They turn and come straight in, facing us.
Mommy holds her prosthetics on her lap,
three limbs amputated, smooth
and bare as leafless trees, healed stumps
at the joints––the elbows and the knees.

When the elevator lands, Daddy
sends the wheelchair fast, through a patio
lined with Bartlett pear trees, the children
scampering alongside.

I stand in their wake and weep.

A Morning During The Tour de France

The day starts out hot. Someone is talking
about wine. It’s cool in here.
A little girl with a yellow balloon
and a shirt to match, a pink bow and an aqua
gauze skirt, reminds my friend
of her childhood. The yellow shirt reminds me
of the maillot jaune, the yellow jersey
that appears on different cyclists
in the Tour de France, zipped up the back
to slip quickly on at the podium.
Muscles pump the differently colored jerseys
and ribs show through hunched backs, straining
through the Pyrenees, the riders focused, blind
to the beauty of the mountains; people
and motorcycles swerve into the narrow road
and Basque sheep, bewildered, clamber
up out of the precipitous canyon,
out of the thick mist settling. My latte
contains a leaf stamped in milk. I don’t want
to disturb it. My friend says, “bizarre,” and
“gentrification.” The leaf slides down
to the bottom of the cup, intact, as I sip.
The woman talking about wine laughs.
She has perfect teeth. 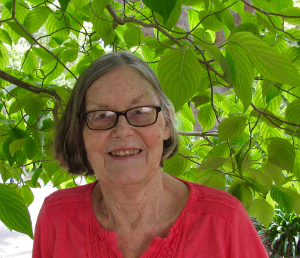 Jane Blue was born and raised in Berkeley, CA, but has found herself living half her life in the Sacramento area. She still smells the ocean blowing up the Sacramento River. She has published widely.  A Morning During The Tour de France first appeared in her latest book: Blood Moon, FutureCycle Press, 2014.