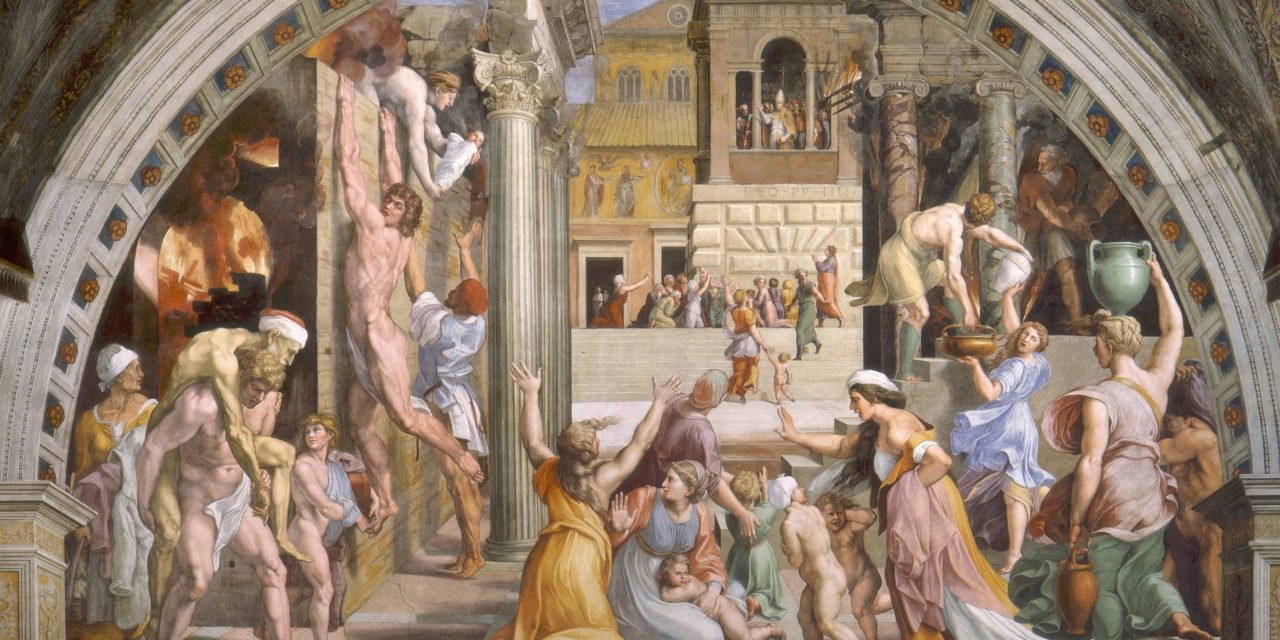 Bent as the wind-bleached timber
posting this belt of road, the old pair
slow down by the eagle’s nest they’ve
passed every day since it, and they,
were new, always relieved when winter
bares the great geometry of bird-craft
welded to the cottonwood
a quarter mile into the field.

The roost perseveres, cinctured
in alfalfa mown out to frozen dew.
Nothing else remains of the time when
ending’s nearness did not circumscribe
the contour of their hours. At this stage
of the game, she wonders which of them
will outlive the house paint laid on
a week before the frost.

No wing, no rustle, no flash of beak.
But eagles play for keeps. Their
irreproachable art persists, obstinate
amalgam to the tree-stem. She knows
that nothing lasts, yet cannot yield
when lasting goes so wrong. Fifty years in,
she still waits for marriage to reveal itself,
her feet banked like broken shale lining
the creek bed, worn down to shards and built
up again when the tide carries in its young.

One kick of dust and gone
is the reeling chance of a lifetime
to unskein the ravel of your salt.
Hands in tangle, I gamble my goods
at the cross, crawl that way to service
a legion of stevedores and queens
at the lowliest pier in the harbor,
then beg the fishes eat my bones.

I hunt the fleeting features of some
other in the street who might scatter
me a powder of you, when you are
not there. Better to stray in the instant
when your back turned kindly away,
barely stirring under moonless heaven
in a plain prairie gown.

Staggering brevity shadows my lights.
I pit febrile motion to the click and swing
of safer measure, swallow the knocking
pulse of days and days, lay hands to mediate
the undone ghost curling adrift of us.

When She Imagines You Now

It is always doing something
she has never seen you do.
Bending to draw a circle in the sand
in a single concentrated motion
with a lean sycamore branch.
Always in Maine. And it’s winter
at low tide. The sands and snows
have crept together and driven
everyone away. But there you stand,
in faultless bareheaded solitude,
hewn into existence by the snap
and burn of unsoiled northern oxygen.

Then brushing the burrs from
a roan cob’s tail. Alone in the barn,
warm and stilled at the end of day.
Immeasurable absorption in this plain,
intimate task. The two of you bathed
in a vinous brew of exhale, dander,
and silage.

Pulling a root from black November
earth of something you planted
and grew. Drawing back the curtain
at midday to take position of the skies.

Hoisting the mizzen. Brushing dirt
from your knee at Arlington. Sipping
coffee in Sao Paolo, silently watching
the dawn come in.

Sweeping dust from the stair
in your father’s long-empty house.
Shaking the splintered filament
in a forty-watt bulb. Idly tapping
a cigarette on the faded roll of an
armchair. A sextant on your knee,
copper skin pocked with briny rust.

Laughing, with your son.

Choosing a stone for carving in Paros.
Dawn light lacerating the mute blocks,
baring the one numinous tablet meant
only for you. (Your chisels in Salonika
aligned on the bench in a patient biding
of their own.) Then heaving the weight
alone, despite your caducity, by mule
and wagon over days of chalk and gravel
to home. Lightly as you lift the plan itself
firsthand to the deed.

The very idea of you, defying
senescence, contravening time.

Your son laughing, as only you can
hear him. This boy she will never
see you caress.

Picture, then, the great bridge piercing
the fog and disappearing, in part or not
at all. Unceasing algorithms of the action
fulfilled throughout the day. Like a lone
ascetic dressing and undressing patiently,
over and over, the same unaffected
diction of apparel marking diminutive
shifts of motion. A foot lifting out
a trouser leg, just so. Then in again,
seconds later, never the same way twice.

Picture it—the bridge in vapor, and out—
as if you solely exist to behold the plain,
pliant vicissitudes of transition. Only
harbor men come so near the heady rift
of its surrender. Even they
less than them who chart the wind, tides,
and what metals the air bears that day.
The heaving of tides, the heaving of blood.
Saline chemistries, blindly ferrying germs of spirit
through headlong membranes of matter.

Your own body the instrument for this
elastic collusion of particles—
the fluid-phase equilibria of your dreams
and devastations, your pissings, achings,
and sighs. The clench and release of lucent
brain liquors and tart belly tinctures,
the temperate hydraulics of the spine,
all rocking, rocking their drunken cargo
of particles endlessly on to a somewhere.

And we are most concerned with
the fluctuations. Our contrapuntal gestures
totting up the stochastic of loving.
In regions of space where it might once
have occurred, and intervals where it might
at any instant arise. Our urgent reckonings
cast into random fields of nothingness.

The incalculable span between your glance
this morning, and reaching for the teaware now.

How can we know what’s desired,
or at risk? Counterpane’s turned back
since sunrise. Persimmons huddle
by a still-water flask. The upper landing,
equable as prairie sod, bisects the tacit
margin between what you’ve arranged
and what the guest is seeking.

Did they break north for a sub-rosa
matinee, ardor wrecked in vicinage to
the host’s bedroom door? Or to chance
another junket by the river, dodging
a divorce decree left unsigned among
crumpled receipts and jilted utensils?

Even if you know why they came,
any recondite baggage hauled onto
the porch buries its weight inside
their hearts. But still they enter,
shyly accepting help with a college
duffel still unmarred at the seams,
or an elite carry-on, obsidian-hard
in the afternoon light.

You lead them in as if for
the dozenth time. Quick learners
politely nod, pretending quirky faucets
and sticky hinges are old news to them.
Soap ingots and cocoa dainties mean
nothing here, near at hand and just as
easily forsaken. How can they know
this house is made over again with
every draw of inculpable country air?

Presence arises, coherent as
pachysandra yawning under
the balm tree. Even as the lodger
boards a morning train home,
my hands reach to lay four,
rather than two, places for tea.

I can only tell you how it is
to find traces of their leaving.
A sock in the bedsheet hem,
private as a diary page.

There’s a crack in everything / that’s how the light gets in.
—Leonard Cohen

Beauty is a defiant, elusive thing, culturally specific and universally subjective. Poets might be as enamored with the impossibility of nailing a unifying principle of beauty as we’re in love with objects of beauty that seize our attention.

Wabi sabi, a 600-year aesthetic tradition in Japan, is as near a definition of beauty as I’ve ever encountered. More a broadly-inferenced state of consciousness than a defining logos, wabi sabi recognizes and celebrates the inherent imperfection and ephemerality of existence. Some Japanese artisans materially express its meaning by mending damaged pottery with veins of gold—a  practice designed to remind us that beauty is inherent to all earthly phenomena, including that of our own death. Like them, great poets capture the pathos of brokenness and impermanence, where our reality is continually made and broken, and remade again.

Poets are archaeologists, charged with excavating beauty from ruins. We are watchkeepers of human frailty and catastrophes, the infirmities of age, the inevitability of death. We point to the hidden tenderness of a rusted Edsel wedged in fields of yarrow, an apple made more beautiful by a spreading bruise. We dare ask, again and again, why we don’t understand what beauty is, but are compelled to seek out its most unexpected, least obvious arising.

My work lives at a juncture where the sting of failure is tempered with unexpected transcendence, a classic paradox that cannot, and need not, be logically explained. Returning to the incomparable wabi sabi of Leonard Cohen, at the vulnerable core our inescapable imperfection we are ugly, but we have the music. 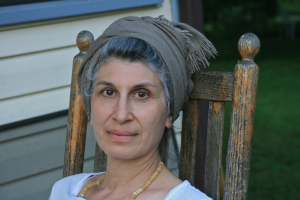 Stephanie JT Russell is a multidisciplinary artist, published author, editor, and educator. Her poetry and essays have appeared in journals such as MR/Metropolitan review, Xavier Review, Friends Journal, and Rabbit & Rose. She has been anthologized in Oakland Out Loud and Words Upon the Water (Jukebox Press). Her nine nonfiction books have been published by Andrews McMeel. Russell’s visual and performance works have been presented at venues such as the Albright Knox Museum, Hallwalls, Nuyorican Poets Cafe, and the Ampex American Music Festival. The poems published here are excerpted from her recently completed manuscript, Promethea Interprets Talmud / While Dying in the Rest Home.