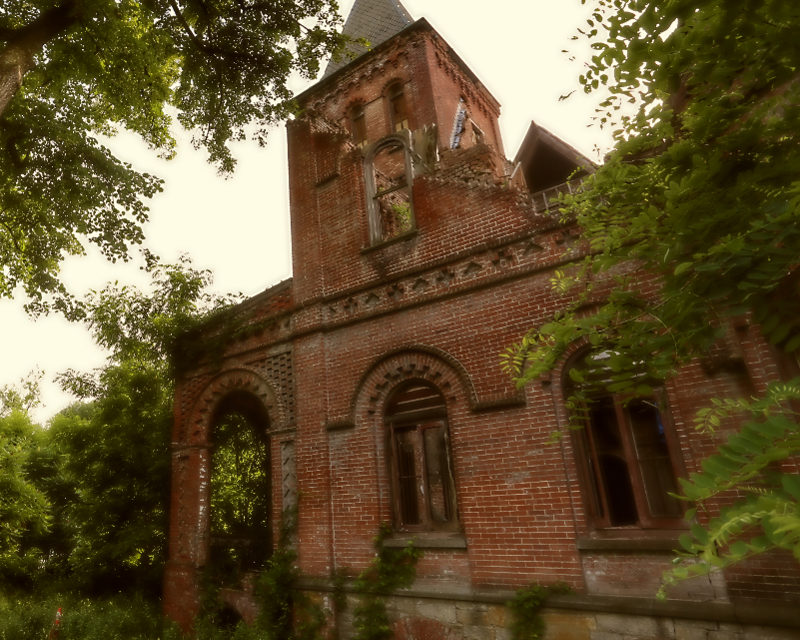 Half a mile of thimbleberry bramble.
A carpet of winter-bleached maple leaves
rotten with snow melt, our steps soft on

granite stairs caked with years of mud. All
the way up the side of a brick basement
missing its manor house. Our legs dangling

over two stories of empty air and shadow
to see the Hudson’s blinding flash, its silver
slash behind a scraggle of March trees and

the hiss of distant traffic. Me at nineteen.
I could barely hear wherever it was we’d
left the car, but wasn’t afraid of the boy

who’d hiked with me there, was glad to
smoke the joint he bare-finger snuffed after
two hits, was glad to cough and laugh

and upend beer bottles from my backpack
or maybe his, the amber glass glinting,
sweating, almost too cold to hold in

the river’s last winter breath. What mercy
kept us from washed-out mortar, loose
stones, sudden tree roots, and the clunk

of his uncertain transmission? What grace
kept us dreaming backwards, beyond
ballrooms burned, past kitchens fallen in

and saw us home safe and chattering
about Prohibition and F. Scott Fitzgerald
while the dying sun gilded all that waste?

Seventh grade, and the otherness of red and
blue stage lights in the high school gym, not
the basementy, rubber-smelling elementary
one. A huge high ceiling with basketball nets

folded up into it and somebody’s band on the
chest-high, rolled-in stage. My parents’ new
house just a block away. Maybe the band was
just pretending to play their instruments. My

mod, high-waist mini dress: navy skirt, white
collar. Thinking about the the red-haired guy
who’d asked me to go was sickening. I knew
holding hands with him would be like holding

my breath, that I’d need to run away and get
some air. I must have been there alone, afraid
to dance even in the circle of girls because I
loved dancing and knew I was terrible at it,

terrible at everything for the rest of my life.
Even singing in my parents’ car! My sister
groaned and said shut up, so I did. “Glad All
Over” by the Dave Clark Five three times in

a row. The band was definitely faking it, but
we all stomped hard on the two drum beats
in the chorus, and the floor shook. You felt it
even over where I stood. Why did I like such

a stupid song? I didn’t know then that I’d turn
into one of the teachers in the corner. I didn’t
want to be like everyone else but here came
that dumb chorus again: so glad you’re mine!

I was in choir already, my purple, overcoat-heavy robe
weighting me nearly into sleep. The scent of brass polish,
the scent of lemon oil, Father Carsten’s white hair like
baby bird fluff on his nearly-bald head in stained glass

bronzed light near the many-times-varnished pulpit.
I thought of his wife’s fur stole: two or three little foxes
with their heads still on, each biting the other’s tail to
hold it around her neck. Maybe I wanted one exactly

like that. How pleasant to be bored, pleasant to be
too warm, fading in and out of the snore of so many
words. It might even take until Christmas to get to
Communion. But suppose it only took until summer?

We’d be in Cape Cod then, where we never went to
church. I looked at Jesus with His lap full of children
in the window over the high altar. His hair was golden
brown, like my mother’s and sister’s. In waves. Waves

on the beach at Cape Cod, biting each other’s tails, like
Mrs. Carsten’s stole. In Joseph’s lovely garden, the Lord
Christ’s tomb was made. Easter scared me more than
Halloween, all those lilies growing out of what? Michael

the acolyte passed out last year, but only long enough
to brag about it later. Father Carsten didn’t even notice.
The service went on. The service always went on. Bells,
the hoot of the organ, the endless, Zen, Episcopalian hum.

Like everything else, it was mostly about waiting,
especially for me, lost in the furthest-out exurb
of the kicking order, then sent to the outfield: Way,

way out in the outfield, as Sandy would say. She
dropped either my sister or me off the top bar of
our swing set, telling us it was exactly the same as

a circus tight rope, but perfectly safe. Sandy was
Captain of the Team always, her scowling face
sidewalk-tough as she ran to meet the bowled ball

and launch it toward Ashford Avenue. How odd
that I don’t remember which of us fell—Susan or
me—or anything about how that must have felt:

letting go of Sandy’s hand, one queasy step, a
futile grab at a swing’s aluminum chain, and then
the cruel truth of the ground, the all-over ache

of having lived. Sandy was a year older than me. She
had the only male teacher in our elementary school.
He’d sewn her costume for the class play: green

and purple silk, leg o’mutton sleeves. He’d made
her Queen of Something. I stood below her parents’
picture window and marveled at what I’d seen in

the twilit auditorium just a few hours before: same
girl, same dress. I knew that her life would never
be mine. Mostly, I’d be waiting for my up, the ball

skittering toward me across tar and asphalt. Mostly
I’d be pulling back my right foot to kick it and not
(Oh, God!) stumble. And mostly, I’d be out at first. 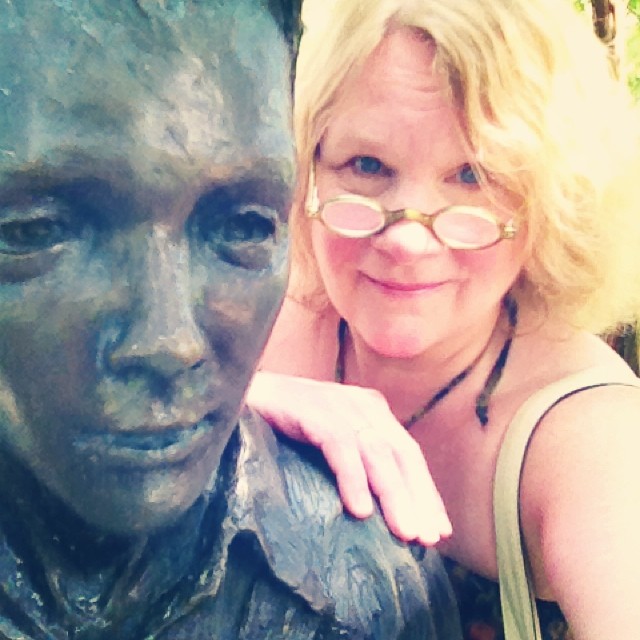 Christine Potter is a writer and poet who lives in the lower Hudson River Valley. Her poetry has appeared in Rattle, American Arts Quarterly, The Anglican Theological Review, The Raintown Review, Autumn Sky Poetry and Eclectica. Her two books of poetry are Zero Degrees at First Light and Sheltering In Place.  Christine also writes YA time travel fantasy. The Bean Books are now a trilogy in its second installment: Time Runs Away With Her (Book One) and In Her Own Time (Book Two). More at chrispygal.weebly.com.