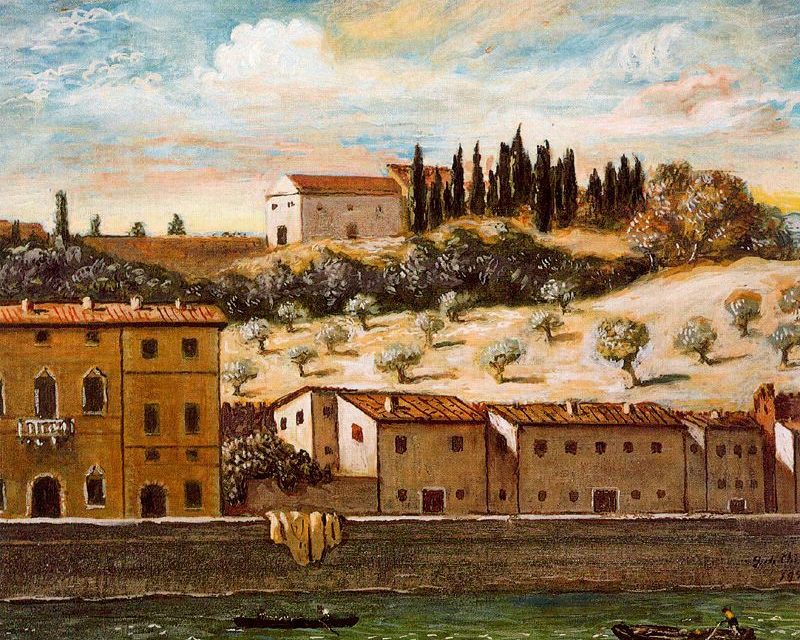 Morning sun gilds the city,
charges the sky electric blue.
I enter the cathedral and climb

into its dome behind lovers, hand in hand.
The passage narrows; the woman hesitates.
Her companion glances back at the stream
of pilgrims and coaxes her upward.

She balks at the Plexiglas interior balcony,
the distance to the geometric-patterned floor,
begs to retrace her steps,
but it’s impossible. The line halts, waits.

I would suggest she look up,
but the dome’s frescos writhe with apocalyptic fury.
Face the wall, I tell her. It has stood for over 600 years.
Keep moving; you’ll get through.

She trembles, presses palms
against stone,
inches forward—
the abyss whispering in her ear—
escapes into a stairwell
winds higher,
pushes through an opening
that delivers her into the heavens.

blind to the sea of red tile roofs,
rolling hills’ ascent to purple-hazed
mountains, the Arno’s spangled
journey beneath its bridges.

I circle the observation platform
expecting her to flee, but she does not.
Her companion whispers in her ear.

Wrapped in a blue caress,
she leans, looks, sees,
accepts sandstone’s
strength, marble’s comfort,
hears the heartbeat of the faithful.

We climb off the train
onto an empty platform,
dart through pelting rain to a cab
that drops us an eighth of a mile from the station
to a ramp, its sharp descent forbidden to vehicles.

Lean back, my husband
says, as the suitcase nearly escapes
while I struggle to maintain my footing on slick stones.

We turn down a bridged pathway
along a lemon, stuccoed wall draped with ivy
to a door nestled between nodding hydrangeas
and palm, and enter the Albergo Milano,
drip puddles on the tiled floor.

Savory promises waft from the kitchen;
a woman smiles from behind the desk,
leads us up, up honey-colored stairs,
unlocks a door numbered sei.

A gift from your friends, she gestures toward
chilled champagne in a silver bucket.

She slips away as we open French doors,
our intake of breath, a duet.
We hover above Lake Como, rippled, gray,
see the opposite shore dotted with Bellagio
and Menaggio, their backs to the mountains,
peaks obscured by veils of cloud and rain.

The hotel cat finds us on the balcony,
winds through our legs.

Mother and I pause at flowerbeds
along the garden’s perimeter,
continue our procession around islands
anchored in the vast lawn.
She points to specimens,
recites names,
plants seeds of memory.

In spring, Stars of Bethlehem push
through earth’s caul of decay,
as do violets and lilies of the valley.
Forsythia, quince, and spirea
reach toward the heavens.
At the ancient lilac wall,
she buries her face in scent,
sways as if in prayer.

We kneel together,
remove spent blooms, pull weeds,
press fingers into loam, once clay,
to the rhythm of the frog’s bellow,
the cricket’s song.

Like many things, they remind me of my mother,
who planted them in a sunny bed along the garden fence,
where they stood in lavender, pink,
and peach clusters, amid the more serious
irises, dressed in purple and reddish-brown velvet.

I remember being small enough to press the flowers
to my face, kiss their frilly petals. To me, the glads,
as my father called them, looked like girls ready for a party.

Years later, on an August afternoon, my mother, arms
filled with a bouquet wrapped in damp newspaper, arrived
at my tiny, first apartment. She knew what to bring to a girl
who was waiting for the party to begin.

Rain splatters the kitchen window
as I spoon tomato soup
made with milk, not water,
nibble a grilled cheese sandwich
browned to cast-iron perfection,
lick contentment from my lips.

In instances of heightened awareness—when we travel, experience life milestones, wander the natural world or art galleries—beauty is evident and abundant. In truth, it surrounds us daily, but we become distracted, blind to its existence. Life, however privileged, presents challenges, heartbreak, and loss. What can we do? Pay attention, look for beauty in all its forms, commit it to memory, let its luminosity seep into our bones. It will accompany us in darkness, urge us forward, and provide comfort and  strength until we reach the other side. 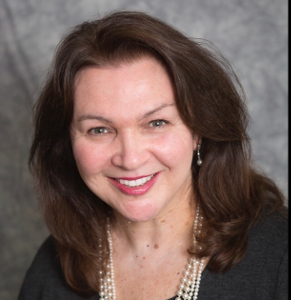 Diana Dinverno is a multi-genre writer. She was a finalist for the New Rivers Press 2015 Short Story Prize and the recipient of awards from Detroit Working Writers, Rochester Writers and the Poetry Society of Michigan. Her work appears in The MacGuffin, Peninsula Poets, and American Fiction, Volume 15: The Best Unpublished Stories by New and Emerging Writers. She has recently completed a work of historical fiction set in Renaissance Florence. More at:  dianadinverno.com.