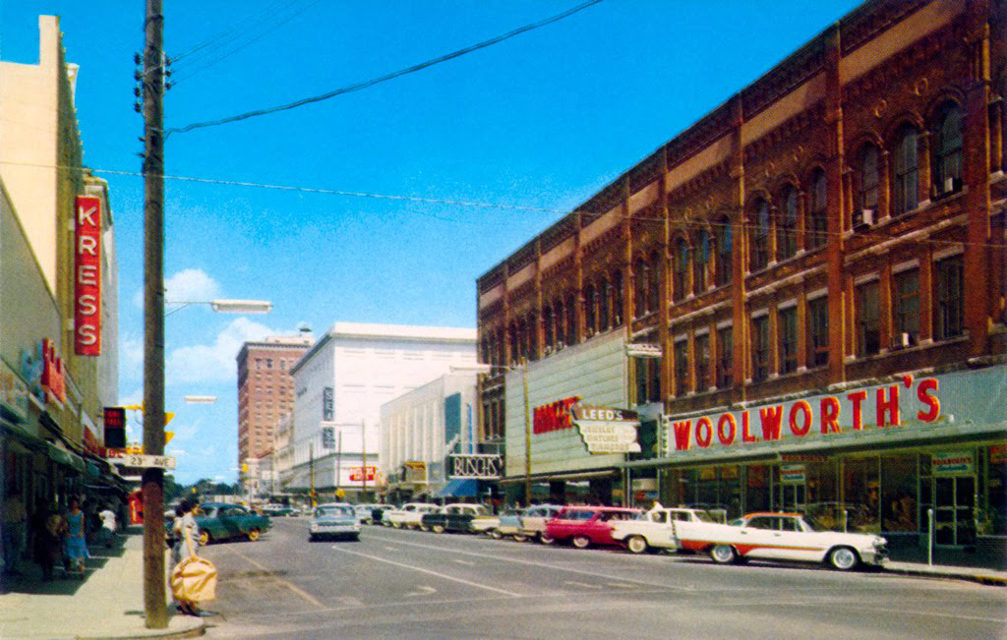 The smell of popcorn always makes me cry.

Long afternoons in the Royal Theatre on Eighth Street in Meridian, Mississippi, sitting in the dark watching bright images on the screen with the loud blare of sound in my ears was the only time I would allow myself to cry. And I did. I bawled like a baby through every movie I saw. When I walked back into the glaring afternoon sunlight, my nose shone as red as the stop light at the corner.

Camelot stands out as my earliest movie memory. I adored the beautiful Guenevere and the courageous King Arthur. The Lerner and Lowe music alone made me swoon, but Guenevere’s betrayal of her love broke my heart. I cried and cried. Leaving the theatre, I felt satisfied and calm in a way I hadn’t felt before. The same tears came for other movies – Anne of the Thousand Days, The Love Bug, Hello Dolly – films that weren’t always sad. I instinctively realized the dark movie house was an acceptable place to cry.

“Don’t cry,” “Be strong,” “Don’t show weakness.” Those were our unwritten family rules. Tears were frowned upon and feelings were covered up. We were urged to “buck up” and not act like a baby. Sharing our feelings was taboo. I learned early to hide my tears.

As the youngest of three, my parents had relaxed some by the time I came along, but still the same family credo of stoicism extended to me. Movies and also fiction gave me implicit permission to cry. I read novel after novel under the covers with a flashlight late into the night. Nobody checked on me as I snuggled deeper under my blanket fort to cry along with Rebecca of Sunnybrook Farm and Mary in The Secret Garden and Jo in Little Women. My feelings overflowed, but only in the safety of my bed or the movie theatre.

Then one evening, I learned that not everyone followed the “don’t cry” rules. Mama slipped quietly into the family room just before 10 pm. I was lying on the floor belly down with my feet swinging in the air, my eyes glued to our large console TV set. Since it was the end of a gripping TV episode of Marcus Welby, MD, at first I didn’t notice my petite mama in her fuzzy blue robe settling in on the end of the sofa. Filing her nails and slavering lotion on her hands, she patiently waited for my program to end. Once the closing credits rolled across the screen, she knew I wouldn’t just get up and walk out of the room. Compelled like a moth to the light, I walked over and sat on the sofa next to her. Daddy had already retreated to his study or, more likely, gone to bed. Since my older brother and sister no longer lived at home, just Mama and I sat together on the sofa in the quiet house.

That is when she began to cry. With tears running slowly down her face, she told me how Daddy ignored her and how her friends didn’t understand her. “They all think I don’t eat enough,” she’d say. “Your father never seems to want to talk.” This was the first of what would become an almost nightly ritual until I left home a year later. She never talked about my siblings, but she lamented each night about her husband, my father. By this time I was in high school and observed their marriage many years, so none of this was a huge shock. But as the youngest child and the most obedient and enmeshed of our family, I listened to her litany of sadness. I held her moist, lotion-covered hands and breathed in her gardenia scent as she released her feelings onto me.

Until this time, my mother never cried. At least not in front of me. Perhaps it was triggered by her long illness and near death experience that she suddenly began to release tears. All of her feelings floated to the surface at 10 pm each night. Like me, she was raised not to cry and was not going to show her feelings to her husband of more than 25 years. He didn’t tolerate tears. So it fell to me to be the repository of my mother’s newfound expression of emotions. She was going through changes – children leaving home, living with illness combined with the onset of menopause – and she dumped those feelings onto me even though I was obviously ill equipped to deal with her instability. I swore to myself that when I had children of my own, I’d never put them in this uncomfortable position.

And the strange thing is, we never discussed these one-sided late evening conversations at any other time. During the day and each evening at dinner, my mother took care of my father and me and ran our household like normal. It wasn’t until just before bedtime that she’d corner me in the family room and let her tears flow.

Her tears made me uncomfortable not just because of what she revealed, but because I’d been taught not to cry. And seeing her lose control of her emotions solidified what I’d been taught: Crying is messy and we don’t want to burden others with our feelings. I didn’t tell anyone about these evening sessions because that would have broken an unwritten family rule, but as soon as I could, I got out of that house and went off to college.

As it turns out, I am actually from a long line of bottled up women. Women who kept their feelings to themselves. Women who smile and nod, keeping their true emotions deep inside. Mothers who teach their daughters who pass the trait onto their daughters. Don’t cry, don’t show emotions. Keep everything bottled up inside. This was actually a useful coping mechanism to survive hardships in the days of with my great grandmother.

My mother’s grandmother, born just before the Civil War in 1856, lived to age 97. The world changed drastically during her lifetime – the invention of telephones, radios, cars, airplanes, television. Transportation and communication transformed the world by the time she was an old woman. In my mind’s eye and probably in my mother’s, she seemed old always. She didn’t let the changes in the world affect her way of life. She stayed in Mississippi, never venturing far from her hometown and instead choosing letter writing and reading as her connection to the outside world. Not only did she live to see the re-creation of the world around her, she outlived her husband by 25 years and her youngest son by 24 years. She wore widow’s black for the last quarter of her life. She also loved cutting up magazines and made a hobby of creating scrapbooks for her grandchildren. I have two of those books, which were passed down to me.

Known to everyone as Ma Dink, she was short and stocky and always wore her long hair in a tight bun. In the few photos I’ve seen of her, she was not smiling. In addition to creating scrapbooks and writing letters, she considered herself a songwriter. A hymn writer, to be more accurate. Not a single one was ever published, but it was not for a lack of trying. She was constantly in correspondence with Wesley House and other Methodist publishers and hymn writing contests in an attempt to get her poems and song lyrics published. The scrapbooks I have are papered with her songs and rejection letters.

But none of these losses seemed to defeat her – her husband, her son, her life’s work – she just kept going like a solider marching on to war (to quote one of her favorite hymns).

She also wrote editorials and opinion letters, mostly about allegiance to America and other patriotic ideals. She would have been proud to lose her life for her country or be a martyr for America by sacrificing a loved one. But her losses were not filled with glory. Her husband died early from an illness. Her son died at 32 in an automobile accident. A traveling salesman for a feed company, he traversed the rural back roads of Mississippi during the Depression. His life ended on a dusty road when his car collided with another. He left behind a wife and two young children, one of those my mother, Lib.

To read the pages Ma Dink left behind, one gets the impression that she never shed a tear over her son’s death. Her advice to her granddaughter was to be strong, look ahead, love America, praise God and don’t cry. Even when her grandchildren, by then ages 5 and 6, lost their mother (her daughter in law) just four years after her son’s death, she counseled young Lib to look ahead and not “dwell in sadness.” It is interesting to note that Ma Dink did not take in her orphaned grandchildren or even see them that much. Jimmy and Lib were separated and sent to live with different relatives in another town. They lived a few blocks from each other, but 40 miles from their grandmother, Ma Dink. Times were hard and I suppose no one family could take both young children. And Ma Dink was old – even though she lived another 20 years – and could not take on the grandchildren. I’m not sure what her income was – a few years before Social Security – maybe that is why she was so desperate to publish her hymns and win contests. Maybe she thought she’d strike it rich through her writing. But she didn’t leave the legacy she’d hoped – the published hymns and poems praising God and country. Instead she passed on the words “don’t cry” – an admonition that has passed down through the women of each generation of loss.

Even now, I have difficulty writing and talking about my feelings. I have to consciously ask myself, “What am I feeling?” and force myself to put the words on the page. If it’s unpleasant or strong, I fight the feeling.

But I have no trouble crying. My tears are no longer confined to movie theatres and reading books, I compulsively cry at anything. Commercials, e-mails, phone calls, traffic lights, work meetings, the classroom – you name it! If I am talking to someone and their eyes begin to fill with tears, I mirror the same emotions. I can’t stop myself from crying along with them. It’s like I’m making up for years of stifling my tears in public. Finally, after many decades, the death of both my parents and hours upon hours of therapy, I’ve finally accepted one fact. It’s okay to cry. Anywhere. Pass the popcorn!

Beauty is everywhere you look, if you just allow yourself to really see with your heart. Beauty is in the laughter of our loved ones, and also in our tears. A long time ago, I chose to see beauty in my everyday encounters and in the world around me and that has changed everything for me. 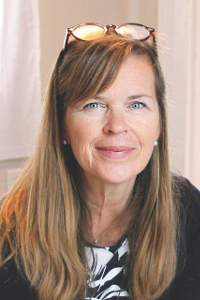 Harriet Riley is a free-lance writer focusing on creative nonfiction. She was recently published in Mississippi Magazine and has been published several times in Teachers & Writers Magazine. She also has a short piece in Telling Our Stories Press. She teaches creative writing for Writers in the Schools in Houston. She taught undergraduate writing classes at the University of West Florida in Pensacola, before moving to Texas in 2007. She has also worked as a non-profit director, hospital marketing director, and newspaper reporter. She has her MA in print journalism from the University of Texas at Austin and her BA in English and journalism from the University of Mississippi. More at: wordsplusideas.net.