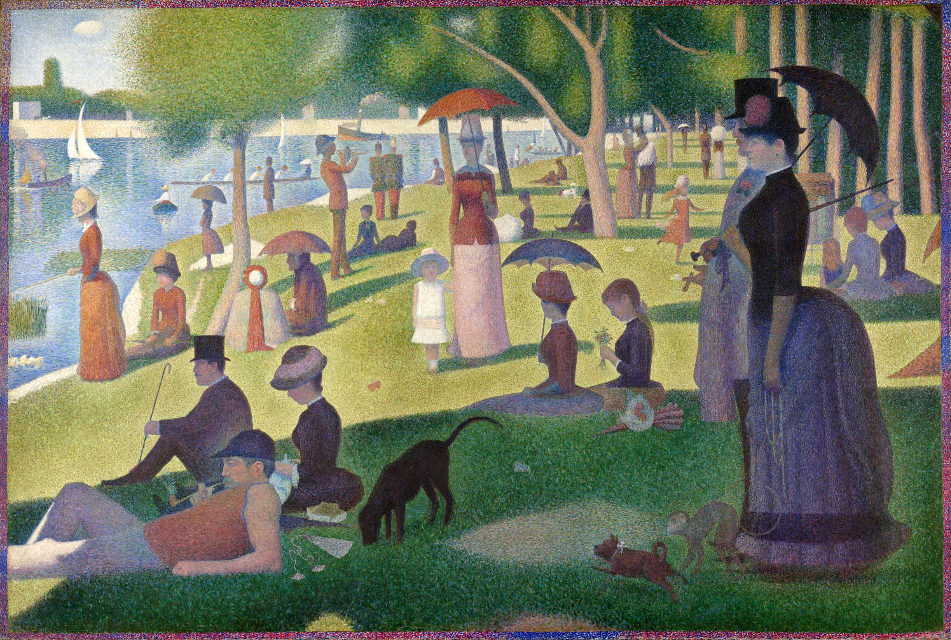 Cecilia and the Seurat

At first, it was the lions that got me.

I was standing with my parents on the top of the steps leading to the Art Institute of Chicago. Dad squinted from the glare off the surrounding buildings, nodding at other visitors as they entered, while the winds off Lake Michigan fluttered Mom’s dress and my hair. I could smell candy-coated almonds from the stand we’d passed as I peered all around one of the two lions guarding the museum. It was enormous. I was enchanted and very nearly tempted to climb on its platform. Or better, its back. What was this wonderful place?

My parents were patient with me, allowing me to take my time. Finally, Dad said, “The Seurat?”

I touched a bronze paw for good luck, then followed Mom through the door Dad held for us, and we made our way to European painting. This was one of the last adventures the three of us would have together. I’d start kindergarten in September and Dad, despite good health at age thirty-five, would die of a stroke that summer.

Mom led us to Georges-Pierre Seurat’s masterpiece, A Sunday on La Grande Jatte. The painting was even bigger than the lions – seven by ten feet – with velvet ropes separating it from the masses. I wondered why, in a building filled with paintings, everyone crowded around this one.

“It’s made up of little dots, Cecilia,” Mom had explained, crouching down next to me in her wrap dress and slingbacks, her eyes sparkling as she smoothed down my hair. “The artist did it on purpose. If you stand back from the painting, your eye is tricked into making the dots appear as solid forms. Seurat thought this helped his colors remain pure and produce a more magnificent picture. It’s called Pointillism.”

“That’s a lot for her to take in, Susan,” Dad said with a laugh. He was wearing his standard wool sweater and corduroys, his tortoiseshell glasses bridging his nose. He laid his hand on the back of Mom’s neck, just below the deep blue scarf tied around her pony tail, and she smiled. They held eyes for a second, the same starry-eyed look they gave each other across the dinner table or after tucking me into bed. He picked me up, brushed past the crowd, and zoomed me back ten feet from the painting. Then, ignoring any disapproving glances, zoomed me in again (giggling now) so I could see the dots’ trick.

I wore one of my best outfits – sweater dress, tights, Mary Janes, my long, chestnut hair anchored back by barrettes – and was aware that I was among the few kids at the museum. Most of the others behaved badly: whining, sulking, angrily towing exasperated parents toward the gift shop. To align myself with the adults, I stood up straight, imitating my parents’ serious expressions as they gazed at the Seurat. After standing and looking for what seemed a very long time, I decided that everyone must be trying to count the dots.

I tried this too, starting with the little girl in the middle wearing the white dress, the only figure who met my eye. The painting had a million dots in every color and shade imaginable. I made it to one hundred before giving up. Then, I counted the people in the painting (forty-eight), the boats (eight), the dogs (three), and the monkeys (one). My stockings itched, but I didn’t bend down to scratch. I wanted my parents to see how good I could be, standing very still in this important place. Finally, my stomach rumbled, and I checked my parents’ faces to see if we were done. Dad slid me a smile and, taking Mom’s and my hands in his, led us toward the café. Once I’d had a grilled cheese and chocolate milk, I’d ask them how many dots they’d counted.

Later, we wandered into other rooms, walking clockwise around their perimeter, stopping to gaze at each artwork in our path. At the end of the day we climbed back into our green Volvo and drove home past an ocean of soybean and corn.

That Seurat marked the beginning. Within nine years I’d fall captive to the magnetic power of art. Then it would become my lodestone. My shield and solace, too.

True beauty is recognized by a physical change in us – a quickening of the pulse, a short intake of breath, a jolt of excitement followed by deep tranquility. Beauty inspires lofty thoughts and provides joy upon remembrance.

Some things that are beautiful to me: the art of Whistler and Sargent; the prose of Amor Towles, Amy Tan, and F. Scott Fitzgerald; the music of Cole Porter; my children spontaneously reading to each other; and the histories of brave people. 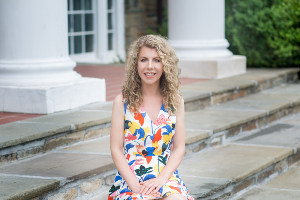 Kate Lemery earned a master’s degree in art history and worked for nearly fifteen years for the Smithsonian Institution and National Gallery of Art before becoming a stay-at-home mom. Her writing has appeared in Chicken Soup for the Soul: The Joy of Less and she is seeking representation for her first novel. She lives with her family in suburban Washington, D.C. and writes mainly during her children’s nap times.