A part of the landscape

When I learned that you had died I cried even though I never knew you. Not properly.  I read in the newspaper how you had left your bivouac on the hill, walked down through the forest in the biting wind and heavy rain and onto a street where you met a woman parking her car. You very politely asked her – everything about you was so restrained – to phone an ambulance. You accepted a blanket from her and said, Thank you. She waited with you. You died soon after the ambulance got there. Inside the pocket of the long jacket you wore was a plastic bag with official documents in it.  Not that it was needed. Everyone would have known who you were by sight, we all did. But perhaps it had the name of your next of kin, even your will, details we may not have associated with you.

You had been a constant figure about town, trudging along the main street, your head bent as you walked. You were a small man – short enough for my young daughters to comment on you – and you carried a white plastic bucket in one hand. I hope I said something positive and uplifting to them about the homeless and helping people and making sure to greet them but maybe I didn’t. We weren’t so aware then. Not like now.

There would have been a time when you first left your regular life in an office behind you, when you began to amble slowly along the crowded main street of our city. As the office workers and business people in their smart black clothing charged by you, I wonder if you faced curious – even dismissive – stares.

I hadn’t expected to be so upset at your death. Maybe I was having a bad year, or it was the stormy weather, or perhaps it was the whole finality of it. I recall crying. I devoured the newspaper articles about you over the next few days. I think I hoped to find out things about you I hadn’t known.

What had I known? I knew that you liked to walk the city streets. I knew you went to McDonald’s and lined up for hot chocolate. Someone said that McDonald’s always gave you a free hot drink but I don’t know if that was true. One time my daughter saw a man in front of you in the queue turn and give you $10, of his own volition.

There were stories about you even then. That a surgeon had offered to operate on the large protrusion on your forehead, offered to do it free, in a private hospital –and you had said no.  That you had been handed new shoes to replace your broken and stubbed ones with the holes, shoes that were far too big for your feet. You had carefully selected just the one to replace the shoe in worst repair.  You had left the other, perhaps for someone else who might need it.

People said they knew you had money, untold wealth in a bank account – except you didn’t use it. You had eschewed it for a life of simplicity on the streets.

I read another time that a local artist painted a portrait of you from a newspaper photograph and included it in an exhibition of his work. On the opening night, the artist looked outside the gallery and by chance saw you walking by. He went out to speak with you and asked you to come inside to see the portrait. You accepted his invitation. You stood in front of the painting and looked at it – I like to think, quietly. Then the artist offered you refreshments, invited you to meet his other guests, but you said that you had things to do, some place to be and quietly and politely left again.

After you died, a wealthy man offered to pay for your funeral. The police and media contacted your mother, spoke to her in her room at the retirement home in another country. Your mother was said to have told a reporter your father had sometimes taken to disappearing from view as well. She was too elderly to travel across for the funeral but I like to think she or one of your family read the letter I wrote, care of the funeral director. I wanted to say something, let her know that you were significant to the rest of us, the people who shared the same streets with you, that you had been part of our world for so long.

Some years after you died, I saw the same portrait of you in a swanky hotel. It had pride of place on the far wall of its exclusive restaurant. A more charitable person than I might suggest having your likeness there could stir benevolence and altruism in those who could afford its high-priced dishes. Me, I merely wondered what you would have thought of it.

Beauty is something not always recognised until it is lost sight of.

After haymaking days on the farm in Aotearoa New Zealand, my father would drive us children to the beach.  The beach was black sands – ironsand – the surrounding cliffs threatened to pummel rocks down on those below and the surf was wild and cold. Lives had been lost at that beach.

In my twenties I lived in London for seven years without once returning to my homeland. After a tough day at work, I’d find myself walking along the banks of a dirty brown River Thames, searching for something elusive.

It wasn’t until I returned home on the other side of the world that I realised what in essence I had been looking for on those evening strolls: the rejuvenating wildness of the sea, the smell of the salt spray, the incredible power and beauty I hadn’t recognised at the time.

Now, I drive a mere 10 minutes, take off my shoes and walk directly onto sand. This is a different beach hundreds of kilometres away from my childhood one but the sand is still a dark colour.  Sometimes the beach is grey and harsh, as it was all those years ago or it may be clear and blue to match the sky.

The smell of brine fills my nostrils and I am able to breathe deeply and clear my thoughts, sort out the plot or ending of the story I am stuck on.  Gulls circulate on the beach, cawing. In summer, the children in their colourful swimwear splash in the waves of the bay oblivious to the towering ferry boat in the distance making its way from one island to the other. Planes take off from an airport next to the sea.

When the wind is wild, the old people huddle in their padded jackets as they gaze at the kite surfers from the safety of their wooden benches. Parents tug their children’s hands and pull them along. A few brave souls, treading alone, hold firm against the gale down by the sea, some leaping away from over-reaching waves as they lap the shore.

Here at the beach each of us in our different ways are paying homage to the raw beauty of the sea. 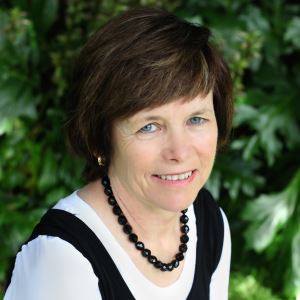 Kate Mahony’s short fiction has been published in international literary journals and print anthologies including: The Best New Zealand Fiction, Landmarks UK, The Fish Anthology (Ireland), and Bonsai: Best small stories from Aotearoa New Zealand. She has a MA in Creative Writing from Victoria University, Wellington. More at: http://www.katemahonywriter.com.