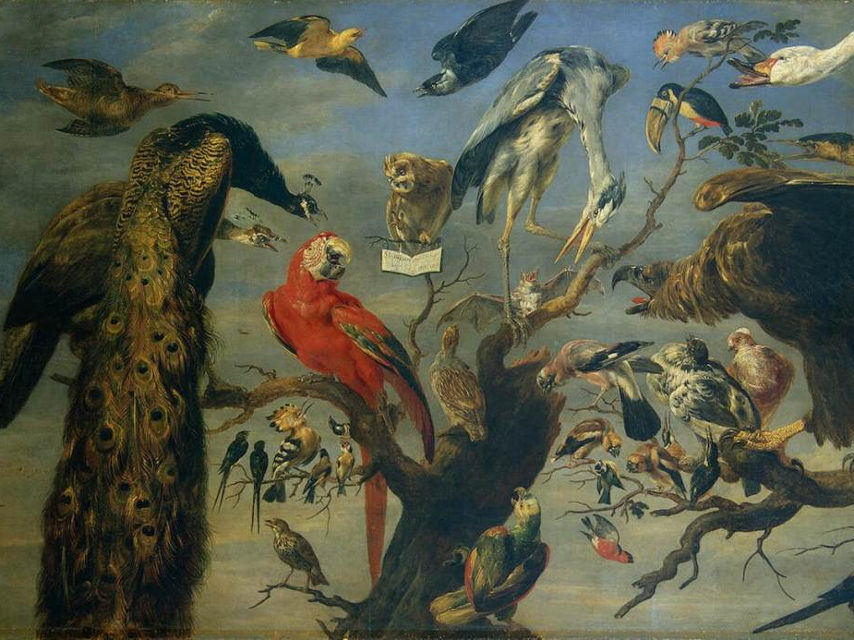 Birds On The Patio Feeders

A big wind is blowing the bird feeders from side to side
……….and thunder mutters to itself but the day
………………..is as bright as Mensa.

Bare branches resembling veins and arteries
……….look skeletal as the bony, unfleshed medical figure
………………..who dances only when someone jerks his puppet strings.

That big wind scours the sky as if the sky is a giant kitchen sink.
……….Trees bend, hanging their heads, sorrowful.
………………..Such drama. Yet we are captivated to see

robins, thrushes—early birds not dissuaded
……….by the big blow, the rumble of thunder, the Danse
………………..Macabre.

They fly with the flow, so light are they, skidding
……….among a thousand currents of air, tipping
………………..this way or that, free from gravity

perhaps, or only delicately tied
……….to grand invisible waves of connection—
………………..or affection, given their shared routes.

The pathways birds—and butterflies—establish
……….could carry us thousands of miles away and
………………..afar were we able to follow them

and some have done so, lugging cameras
……….and high-priced computers and taking notes.
………………..Or one may simply watch the birds feeding

at the feeders on one’s patio, cardinals
……….dignified and sometimes even officious,
………………..the thrush with his rosy underside, juncos

chasing one another off the little
……….red schoolhouse that holds birdseed, or the hanging
………………..cylinder that swings every which way in wind.

We Lived Outside Of Time

We lived outside of time
in a house in a field. Sunlight
shot through the windows like
a gun, killing us softly.
There was wildlife, which
we watched. There were birds
in coats of many colors.
Lady bugs swarmed the ceiling light.
Our little dog loved to run
for as long as we watched him.
Because we were outside of time,
our house seemed colossal, a space
uncluttered with busy schedules,
a space without memories,
though I remembered the smell
of your neck and you remembered
the words I said when I kissed
your paint-spattered hands.
From time to time, weather
intervened, fog
enveloping the birches,
black crows circling
over gutted mice and small rabbits.
Death is everywhere
but we, in our house, believed
we’d come to terms with it.
We knew we weren’t important.
We would not be remembered
and that was a relief
although we were reluctant
to let go our own memories.
Oh yes, including the memory
of the day a skunk sprayed the side
of our house in the grassy field!
We shut the bedroom door
against the smell and smothered
ourselves in each other,
you, me, our dog.
Life is circuitous,
death, on the other hand,
a short stop between strikes.
We ate meals on the lam
(like the time we picnicked in France,
the baguette still warm, the cheese
impeccable). I’d swear
that trees bent down to shade us,
that their green leaves grazed our profiles
as lightly as Georgette silk,
azaleas and daffodils
conversing in sign language.
But we knew the end was coming.
Not soon, we hoped, but hope
is equivocal. It can change
shape in an instant, changing
us, and we were never
that sure to begin with, which
may be why we were
content to drift on a sea
of light, to read our books
in separate rooms of the house.
The little dog roamed
the house as if it were
Texas, as if it were
the whole of America,
as if it were a continent
and for him it was, it was,
and the softest of rains mizzled
his coat of whitest fur
and his soot-black muzzle.
Then the lamp of the daylit sky
came on again and soon
he was dry as a lecturer
or lawyer, or Ezekiel
in the Valley of Dry Bones
but he was too sweet to
lecture or read law
and in a valley of bones
he’d check out all of them,
delighted by his bounty.
We threw the toy hedgehog
and he chased after it.
We threw the tennis ball,
with which he was even happier
as it bounced against walls
and rolled around the house,
our house in a field outside time.
He slept in my husband’s arms,
his coat more soothing than mink.
While my husband held him I stroked
our dog’s silken fur.
We were in our room-with-windows,
the trees outside like Muslims
bending over to pray to the East.
We grew tentative and quiet,
recognizing what would come next:
one of us would die.
Already the air had darkened,
clouds churning in the sky,
our lovely dog no longer
willing to chase the ball
or toy hedgehog, content to lie
in my husband’s arms. That is not
to say that he would be the first.
We did not know who would be first.
The clouds turned black as firemen
fighting wildfires out west.
Like tarps they shuttered our room,
so dark we could not see ourselves.
We clung to our little dog’s quiet
breathing, his steady heartbeat.
We think that in our position
anyone would have done the same.
The clouds gathered together
to make a cloud-roof that covered the sky
from end to end, a cloud
tornadic and whirling, a whirlpool
in the sky. Then the whirling
slowed, and then it stopped,
a door in the center of it
opening. How this happened,
I do not know, but
we found ourselves, including
our small, adventurous dog,
compelled to open the door.
When we tried to turn around,
go back to our room-of-windows,
the cloud drove us away.
Let me tell you: oh,
the sheer dark shove of it,
the push and pressure on our backs,
our dog’s tail signaling,
but signaling what? And then
we were inside the center of the cloud,
flying, or rather, being flown
although we saw no sign
of a pilot anywhere.
We huddled on the cloud’s floor,
if floor it was. This time
my husband held me and I
held our sweetheart, who was
himself sort of a cloud,
not a dark tornadic cloud
but white as angels are said
to be and more like a pint-sized
summer cloud soft as pillow
feathers, languid as
a humble breeze. There was
no point in wondering
just where we were headed. The only
point was in holding one another
and hanging on until the end. 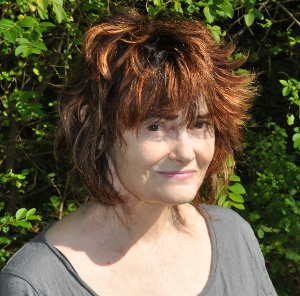 Kelly Cherry did graduate work in philosophy at the University of Virginia and earned an MFA from the University of North Carolina at Greensboro. Cherry is the author of more than 20 books and chapbooks of writing. Her collections of poetry include Songs for a Soviet Composer (1980), God’s Loud Hand (1993), Death and Transfiguration (1997), Rising Venus (2002), Hazard and Prospect: New and Selected Poems (2007), and The Retreats of Thought: Poems (2009). Her works of fiction include Sick and Full of Burning (1974); In the Wink of an Eye (1983); The Society of Friends(1999), which won the Dictionary of Literary Biography Award for Short Fiction; We Can Still Be Friends (2003); and The Woman Who (2010). An accomplished writer of nonfiction, Cherry has also published memoirs, including The Exiled Heart (1991), and essay collections, such as Girl in a Library: On Women Writers & the Writing Life (2009). She has also published two translations of ancient Greek drama. The recipient of numerous honors and awards, Cherry was named the poet laureate of Virginia in 2010. She has received fellowships from the Rockefeller Foundation, the National Endowment for the Arts, the Ragdale Foundation, and Yaddo. She taught at the University of Wisconsin–Madison for more than 20 years.  She lives on a small farm in Virginia with her husband, the fiction writer Burke Davis III.