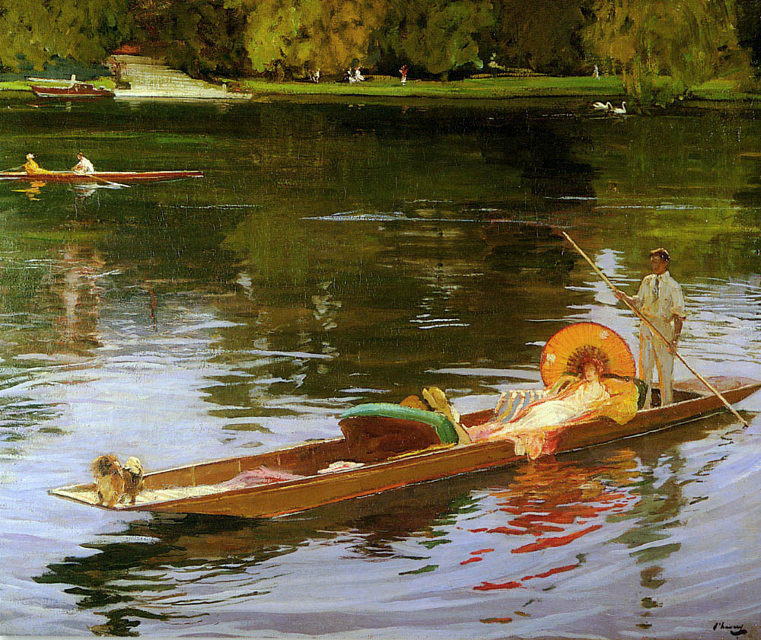 A first trip to Europe should be fun. During the drive back from the Taitinger champagne caves, they pass rows of grape vines, fields of heavy-headed sunflowers, red poppies buzzing with insects, then Joel stops at a farm stand. Maya bites a strawberry and watches him unfold a map and trace their route from Paris to Amsterdam, Brussels, Lubeck, car ferry to Copenhagen.

When they met at a party, her left foot was in a cast– broken fifth metatarsal,  misstep off a curb. He seemed sympathetic, seven years older, a Harvard law grad, smooth, nothing like her last boy friend, Zack, bright, near-sighted, hesitant. They start dating, and not long after a doctor saws the cast off, Joel gives her a matched strand of pink pearls and proposes. Amazed, she hears a voice that sounds like hers say ‘Beautiful, yes!’ The rest of her watches, baffled, as it’s “too soon, too crazy,” but that gets muffled and pushed aside.

Joel drives to the top of a hill and takes photos of the valley below, like a Millet painting,The Gleaners, but no little girls with braids and white aprons collecting harvest scraps in baskets, just wide, rippling green. Gray clouds thicken, then drizzle starts, warm and earthy. He wants to leave, but she stretches her arms up and spins circles in the rain until storm clouds drift off, leaving double rainbows in the mist, one curved above the other.

He shouts, “Enough prancing. Get in the damned car.” Luckily the Peugeot’s stalled, so she keeps dancing in her sopping t-shirt and jeans, starts to think what it would mean to be away from his bossy voice, though they’ve been together only a few months.

Back in DC she agrees to see a therapist, once, then twice, then three times a week, to discover what’s ‘wrong’ with her, analyze why she married him, why she’s confused, why she’s still here. The therapist nods his head, blinks, says nothing.

She signs up for a German course, quits after three classes, gets headaches, hears time’s cosmic waterfall rushing when she tries to sleep, hours studying blank dark.

When Joel’s mother gives her a pressure cooker, she attempts cabbage soup, but releases the top too soon, shocked when the lid explodes, splattering the kitchen ceiling. She mops the mess, dumps the rest. Her Julia Child cook book  has a recipe for boeuf Bourgingnon, though she’s mostly vegetarian, which works better than the cabbage soup.

At a ceramics studio, she learns to throw pots, finishes two pretty ones, but bashes them all with a wooden mallet, like a grim modern dancer performing ‘end of the world,’ arms flailing, torso twisting.

The year circles, and she needs to escape, but only tells her grad school advisor and her friend Heidi, both in Boston. She doesn’t dare confide in Bobbie, happy with her second marriage and new baby, or Emily, who complains about her husband’s nastiness while she prepares tartes au framboises to impress dinner guests. Maya can’t deal with possible questions or reactions, no teary goodbye scenes, no convoluted explanations.

But she hints to Bobbie over lunch, “Don’t know why I’m still here.”

‘Love’s not supposed to be like that,” Bobbie says from the kitchen where she’s heating a bottle for baby Julie.

“That kind of thing never gets better, so what are you waiting for? No one cares that he’s with the Securities and Exchange Commission, just another D. C. government job. What about your life?”

Joel paints her name, Maya, on his day-sailer, moored in Chesapeake Bay, expecting her to be pleased, and is puzzled when she scowls and bursts into tears. Sailing with him means going nowhere, watching jelly fish float by while he steers and fiddles with charts. Better to be alone than with someone she can’t talk to, doesn’t want to touch, her big stupid mistake.

In psychology books, she’s underlined descriptions of bad sex–empty, joyless and, best was the chapter on ‘prematurity’– inability to sustain erection–where she recognized Joel. Efforts to discuss their sex life go nowhere, as he shuts her down saying,

“You’re the one seeing a therapist, not me. Things would be fine if you’d pull yourself together.” He pays bills, opens the car door for her, spends hours smoking his pipe and doing the Times crossword or playing chess, sure he’s the perfect husband. She’s defective, but it’s not his fault.

Appetite gone, Maya notices her clothes getting loose and floppy, stays up late to avoid bed with him, reads Plath and Sexton, the suicide poets, but tells herself “that doesn’t mean put my head in an oven or drink poison, dammit.”

One morning in August, she takes her suitcase, packed in a closet for weeks, and hails a taxi to the airport. The note she leaves on the kitchen table says, ‘Steaks in the freezer,’ nothing else.  Heidi picks her up at Logan, too kind to say what she’s thinking: ‘What in hell took so long? I’ve been expecting your call for months!’

She could have borrowed money, from Heidi, from her mom, to leave sooner, but wanted to get out using her own power, fight her way free.

Mom’s comment: “Obviously a snob, looked down on our little house in a working class neighborhood, but I hoped things might work because he has an ivy education and is well off.”

He made snippy comments about their blue wall to wall carpet, the department store furniture, as if he’s some sort of gilt-edged prince lifting up dusty Cinderella. Why didn’t she get it? Too Impressed by his manners, his money, and, of course, his frigging Harvard?

Maya sleeps well on Heidi’s scratchy wool sofa, plays with her black Labrador, sings along with Joan Baez records and dances to Ravi Shankar, calmer, except for outbursts of “Elope with him? How stupid was that? I’m such an idiot.”

Heidi says, “He impressed you with fancy pearls after you broke your foot and spent weeks hobbling on crutches, self worth down the toilet. You were naive, a virgin, and Mr. Harvard Law comes along, a fantasy romance. That’s the best I can do to make sense of this mismatch. There must be better men out there, though I’m still looking. Better stay solo than be with a selfish jerk.”

Not ready for dating, she starts ballet classes.  Joel keeps calling, asking her to come back to DC. “You were seeing a psychiatrist three times a week because you have serious issues,” he says, implying she’s weak and unstable, but he’s noble, trying to take care of her.

She tells Heidi about the DC therapist. “In his brown leather chair jotting notes on green-lined paper, he appears to listen for the required fifty minutes, says next to nothing, but implies I’m the problem, not Joel, because i’m ‘young and immature.’

The last appointment I say, ‘I’m leaving DC in a few days, bye,’ pick up my purse and open the office door.

Did he hear what I said? Maybe figured I didn’t have the guts to do it? I felt like swatting the bastard.”

“Glad you didn’t. They’d slap a label on you, toss you in a psych ward, which means no divorce. Women’s groups are working on it, but changing law is slow.”

Joel is still asking her to come back and ‘try again.’ When he calls, Maya puts on a sad voice. “We both know it wasn’t working,” offering him a way to change direction without losing points in the game. When she puts the phone down, Heidi covers her ears. “That arrogant, selfish shit, trying to undermine me, dragging it out.”

Months pass.  Finally he signs divorce papers that have been sitting in the lawyer’s office for months, and sends a note about his new girl friend, a Vogue model. It’s over.

“Good luck to her,” says Heidi.

Late October Joel’s mother calls wanting to deliver things Maya left in DC. The gray Lincoln, towing a U-Haul trailer, pulls up outside the house where she’s working as an au pair for a French family with two little boys.

Their faces are hard to recognize without smiles pasted on, but they help carry boxes to the downstairs hall. Maya says an icy “thank you,” relieved there’s no attempt at hugs, unsure whether they deserve blame for their son’s ways. When they drive away, the empty trailer bumping along, it’s another divorce. “I’ll never see them again, thank God!”

She carries boxes to her chilly third floor room, unpacks jackets, sweaters she forgot about, books, boots, but feels something wrapped in newspaper. She tears paper from white china plates bought during their doomed European ‘honeymoon,’ six of the twelve place settings, as well as the Danish forks, spoons and knives with narrow handles that seemed chic then, but now look like dental tools.

Is he dumping things with negative memories to show her what she’s lost? As usual, he didn’t ask what she wanted. She considers bashing the china, but too expensive, and she needs money. She’ll use paper plates, cheap items from resale shops, random pieces–wants nothing from him, zero.

Her mother takes the Danish things to a consignment shop and brings her an envelope of cash. After a few months she’s saved enough to move from her au pair job to a cheap attic flat with a rattling space heater. She’s studying for orals, taking ballet classes, teaching sections of freshmen comp–having a life.

She chose those things, but why? To appear sophisticated by avoiding designs that might look frilly or old fashioned to Joel and his rich parents? When he proposed and presented that string of pearls, there was a jolt of energy. Was it excitement? Maybe she’d be happy? Confusing, as she didn’t know him or herself yet, so it was blind impulse, a jump to something different. No way it could it end well.

Later she finds journal notes from the trip to France, champagne caves and strawberries, remembers seeing those double rainbows, some kind of sky signal,   translation for mortals: “pick yourself up and get out.”

No one ever asked me for a statement on beauty before, and my first reaction was, “beautiful idea!” Then I recalled peacocks I saw in an ashram during a trip to India, mythic birds strutting, flaring astonishing feathers.

Nature generates beauty in endless forms, and I’m not convinced that the extravagant detail is only camouflage or mate attraction. It’s got to be more than that, as it’s gorgeous beyond utility. Beauty is a reference to higher realms, whatever you want to call them, and there are so many names.

My earliest memory of something being beautiful was when I was small, maybe two, shorter than a table. I looked up at puffy orange things in a vase and was told they’re called Japanese lanterns. That feeling of wonder stays.

Part of what we do as writers and artists is generate and focus perception. At times it’s an ordinary thing that catches me, the amazing shape of a strawberry. And what about the textures of music and dance, the emotional angle of a painted glance, words that express what’s beyond words?

I feel that beauty is a necessity, a lift that re-directs our attention to another level of life, lest we get pounded flat by dailiness in its harshest form, by ugly stuff blared in the news.

We turn our eyes from here to there, see and feel something else, work until we find words and colors that fit, and that makes all the difference. 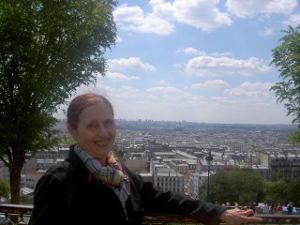