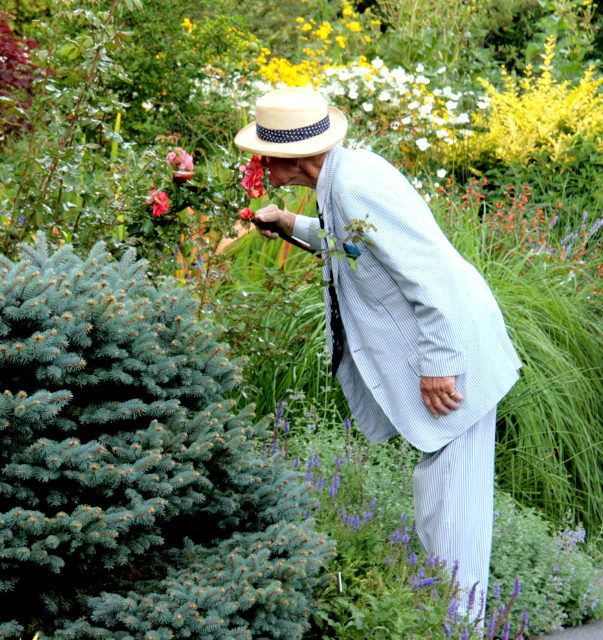 When the carpenters showed up Alfred and Marnie were sitting in their lawn chairs with a TV tray between them drinking coffee and buttering their toast.

The carpenters nodded and they nodded back and began to work building the two car detached garage about twenty feet from their kitchen door. The foundation had been installed and the rebar was sticking up from the concrete waiting for the two by eights.

Alfred told Marnie what the men were doing and why as Marnie sat knitting, watching and listening. By noon the men had one wall upright and braced and they took off in their pickups for lunch.

Marnie brought their breakfast dishes in and the lunch sandwiches out which they wouldn’t eat until the men returned. Alfred went in and filled a cooler with ice, water and soft drinks and wheeled it over to the garage with a help yourself sign taped on it.

It took the men two weeks to finish the garage, adding a black shingle roof to match the houses’ and a large double garage door with an auto opener. The foreman had brought his electrician to wire the garage for that and for an interior light and a spot light. They used clapboards, rough side out, and painted them white and the trim also white same as their house.

I passed Alfred and Marnie several times a day going back and forth to my house. They lived around the corner on a busy state road so everyone in our small town got to see them and since they were church goers they held court on Sunday after the service while they ate lunch in the basement.

After the job was done Alfred and Marnie sat in their chairs for a week staring at the garage talking and finally they put their car and pickup in the garage opened and closed the auto door a couple of times and put their lawn chairs on pegs in the garage.

Once back inside their house life went on as before—Marnie knitting, Alfred doing the crossword puzzle and both watching TV. They spoke little from forty plus years of marriage with not much left to say. Truth be told they enjoyed their nonstop banter in the yard while their garage was being built.

Now it was mostly meal talk:

Come the end of winter, the leaves coming back on the trees Marnie said, “Wouldn’t it be nice to have a screened porch?”

Come the beginning of April Marnie and Alfred were back on their lawn chairs chatting away as the same crew returned and began the process of building them a screened porch with an entrance from both the outside and their living room. They never said so but they were happy it took a good two months to build and then another few weeks to finish the inside.

In the late fall and winter they could no longer use the screened porch so they retired back inside their house and their old ways.

“Should’ve had them make it good for year ‘round,” said Alfred.

It was a beautiful summer day and I was walking through the Bronx Botanical Garden with my camera when I decided to sit on a bench in front of a large row of rose bushes in bloom and take in the beauty of the plants and flowers and people watch. I saw a frail elderly man, nattily dressed in a blue and white seersucker suit with a straw hat and a cane walking my way. My thoughts went to Charlie Chaplin. He was looking at the flowers as he slow walked down the path. He stopped and turned between my bench and another about ten feet away, walked as close to the rose bushes as possible but not close enough to smell any individual rose. He reached out with his cane and hooked a branch with roses and carefully pulled it towards him and leaned over and smelled its fragrance. He then gently put the branch back with his cane, turned back around and continued his walk. I expected him to twirl the cane, Chaplin-like. Watching this beautiful unexpected scene unfold has stayed in my mind for many years.

Paul Beckman has two story collections, Peek and Come! Meet My Family and other stories. He has had over 300 of his stories published in print, on line in the following magazines as well as others: Literary Orphans , Matter Press, Thrice Fiction, The Airgonaught, and Jellyfish Review. He runs the monthly FBomb flash fiction reading series at KGB. His story, “Brother Speak” was selected for the 2018 Norton Microfiction Anthology. Beckman’s new collection of flash and micro stories, Kiss Kiss (Truth Serum Press), will be out in March of 2018. More at: paulbeckmanstories.com.