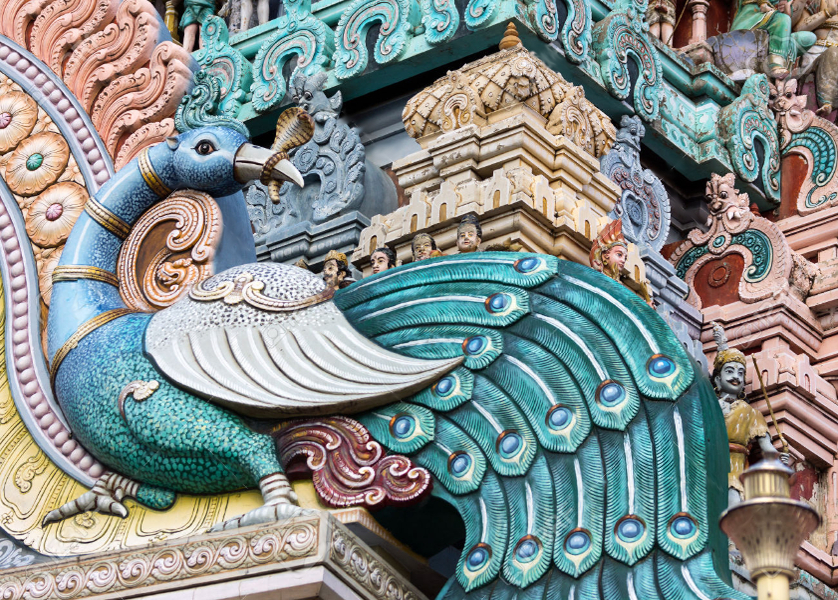 Have you heard the blue peacock calling out to someone out there in a seductive manner—very much like the dating games in the cyberspace; guys trapped in a cul-de-sac, investing and ten regretting after a dud show in a glitzy bar or hotel, returning to solitary beds, in tenanted sprawls, outskirts of vertical cities, global, yet provincial?
No, never, i am sure. Afraid you might not even register the peculiar sound, rendered tone-deaf by the cacophony unleashed every minute in the ugly urban centers with graffiti plastered on dull houses and buildings, run-down suburbs that service the integrated global economies.
However, i did. Some time back. In an unlikely location and time.
In Faridabad. A large complex of high-rises, up there on the thirteenth floor looking out on woodland afar. It was mid-day and terribly hot, attributed to climate change but denied by the skeptics, as false. Anyway. So, I hear this. A strange sound, rather loud and shrill, out-of-the-ordinary, emanating spookily from that distant corner.
A voice natural, breaking out, through the close clutter of traffic din, construction-site noise, smart- phone chatter, humming of cell-phone towers and a brawl somewhere down, making it look so human.
Peculiar notes! Series of vocals wafted up on the breath of a March wind pregnant with jasmine. Or, I smelled it. Maybe wrong! Jasmine, my preferred smell of a perfume, worn on days of humidity and to suppress that Asian odor in a Canadian city, in order to blend.
This mating call  suddenly opened up hidden sluices deep inside, releasing a dammed flow of nervous energy and pent-up emotions of cold homes and i could witness a montage of pre- and post-history, music, performance arts, tradition and talent; markets and profits; myths modern and old but well-packaged, in that single instant. Memories, auditory, surfaced. Time travel. A lost episode recalled.
Sure, i heard it distinctly.
Real?
Or, a passing dream, on a hazy mid-summer night?
One thing sure: Peacock sightings are getting rare.
Hearing them—almost exotic!

Real-time Rain and a Romance on Hold

…and in the village they all running to the waterfront; jumping; squealing; swimming; the monsoon hitting the ting brown bodies; trees singing, an annual ritual collectively executed to welcome the divine gift that revived a dead earth and covered it with velvety green. Mumbai ducks under the umbrellas and canopies, watching safely from a distance…
Rain!
Coming in silently. Strongly reminding me of your pranks, hugs and erotic scents!
How light-hearted!
How tender that trailing breath…that kind touch; those lingering eyes full of kindness!
Greening the innards long clogged up; dried; unused wells covered with weeds and sands of time.
And then—a harsh bell rings and echoes in the outer room, breaking the epiphanic lyricism of an odd encounter.

In-between the daily hi! and bye!
—a common exchange, looking innocuous, everyday, in face-to-face conversations but here, taking on another dimension, evading capture and surveillance and control—
lies embedded a shifting continent of unbridled desires and wishes. This Antarctica of urban emotions spread out in the ether of the internet, like that alley cat, in another wasteland
the icebergs, some—manifest; others subconscious, while remaining ones, yet to be understood, properly labeled and fully articulated, as an intelligent discourse on the anatomy of  virtual behaviors and sentiments, almost universally encrypted as the languages, programmes and codes for the multi-national consumers as navigators of truth and fraud, floating out there, in that sea sans borders
primitive desires, unchecked, in post-industrial disguises and masks, hiding behind clever syntax, gesture, smiley, emoticon—arbitrary signs on white backgrounds, breaking/assembling stubborn meanings that tarry, slide and then disappear, like the recalled goods stacked up in large wombs of the warehouses, of no relevance to the supply-chain and logistics…yet desires bob up on foreign shores, determined as migrants, hitting markets, Whatsapp, FB and other social spaces held sacred by the  aspirational middleclass—

verbal manipulations of simple sentiments, facts, data, faith, truth, objectivity—in most calculating manner, in the ever-expanding virtual worlds.
Are these acts of a cheat or an artist?
Who bothers?

All that glitters is not gold also. Windmills for one; giants for a certain nobleman from La Mancha, celebrated across the world for his adventures that tend to revert the thought- binaries, received truths and modes of perception, in a way few parsonages, literary or historical, before/after Mr. Quixote could ever achieve.

For a sensitive soul from the Lake District, it is chasing a cloud, seeing daffodils or hearing the song of a solitary reaper.

For someone, in Mumbai, it is planting a rose bud in a broken plastic bucket, outside a tin shack of 10X8, in a dark warren of holes, called slums by the elite and chattering classes in their public display of arrogance; in fact, unique ecosystems and urban habitats patronized by the development gurus and ignored by the governments for decades; real powerhouses running the globalised mega-cities by their indomitable energy and cheap labour.

For a person with heart in the right place  it lies in gloomy places, the Dickensian-hovels in the New Millennium locations, where a crippled kid greets you with a sunny smile or a dusky girl-child, under-nourished, attends to a coughing mother, prostrate on a bare floor, in that swathe of land that mimics Dante’s purgatory, difference being the living inmates there, not the dead souls.

At these moments, encounters, you find that beasts can be beautiful, not hideous as imagined.

The aesthetic is a construct and variable, culture-specific.

Across the ages, for the serious seeker of the value, it always, invariably, resides in the human domain—and nature. Gorky found it in the lower depths. Relevant searches locate the trope, the materiality of beauty and delight, in writings that go deeper into human condition and discover them blooming like the lotuses in the mud.

For me, it is situated in a dancing flower on a lonely highway…in the prancing steps of a child from a deprived background, and, the tired eyes of a terminal patient that light up, after seeing a lost kinsman, at the bedside.

It is most beautiful, despite sad episodes, hiccups, betrayals and setbacks.

It is, like Santiago, finding the human essence in a ceaseless struggle in/against most hopeless situations and to emerge victorious.

And in creative words, syntax and images that uplift the recipient above the mundane—like the famous West Wind.

I want to become that wind only and more of the favourite literary or cinematic characters through a complex process of praxis, reading, writing and living the odds, in evolving narratives giving hope and pleasure in pain, a strange dialectic of presence and absence; of delight in distress, distress in delight—the ultimate ideal of real beauty. Other parameters just pale away before such a fresh realization. You live once and for meaningful living in a stressful world, beauty has to be found in dismal contexts. 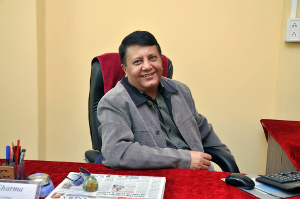 Sunil Sharma is a Mumbai-based senior academic, critic, literary editor and author with 18 published books: Six collections of poetry; two of short fiction; one novel; a critical study of the novel, and, eight joint anthologies on prose, poetry and criticism. He is a recipient of the UK-based Destiny Poets’ inaugural Poet of the Year award—2012. His poems were published in the prestigious UN project: Happiness: The Delight-Tree: An Anthology of Contemporary International Poetry, in the year 2015. Sunil edits the English section of the monthly bilingual journal Setu published from Pittsburgh, USA. More at: drsunilsharma.blogspot.in.