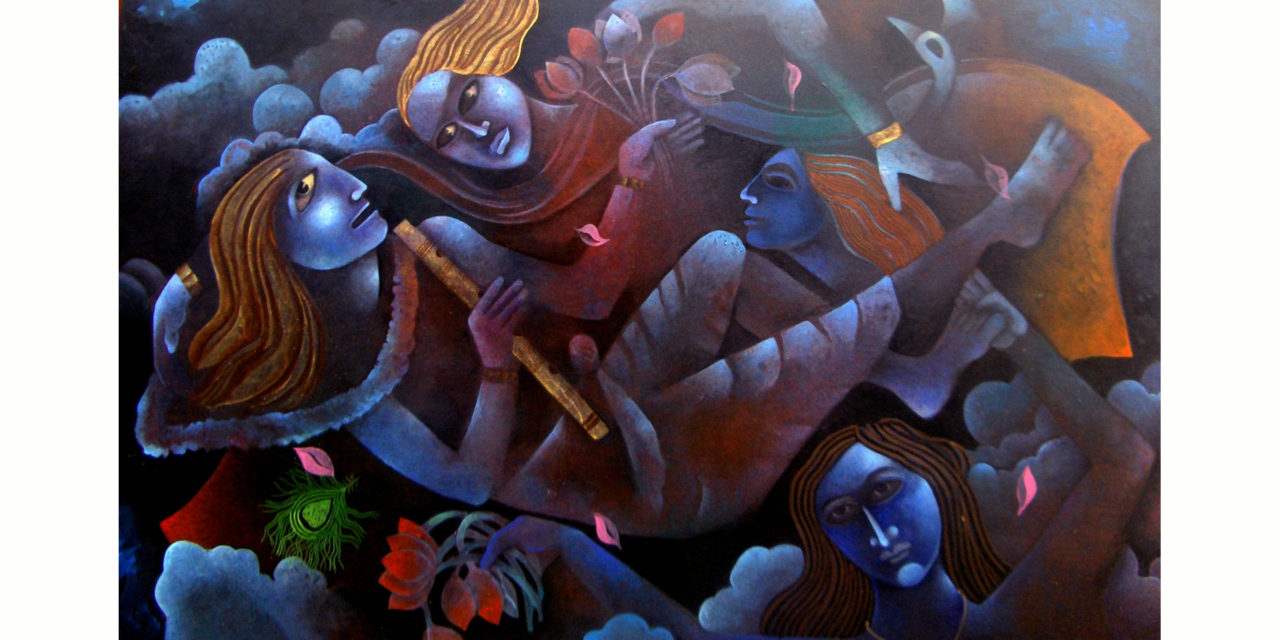 Once a bear cub, on two hind legs, paws lifted, came to our screen door.
My husband growls, frowns; he’s late to a gig, wishes I had not spent
money on new floor mats for the car.  While he swipes at me, air siphons
past crowns, cups of sweet yellow, petals like Elizabethan collars.

Bunched in a jug, lit, urgent, symmetric, daffodils make the possible a color.

Cezanne’s two card players face each other.  The corked bottle between them
reflects a streak of light, a boundary.  Why, in marriage, is there always
one side, then the other?

The man on the left wears a dark, brimmed, higher
hat; dark-haired, with sideburns and mustache, he’s the one I would want,
sardonic.  His coat, blue-black, seems felted, buffed with wear, but his white
collar echoes his clay pipe’s color.  Court cards in his hand show
as stains, red and blue brushstrokes.  The man opposed, on the right, knows
his hand, but we see only the cards’ blue backs.  His hat brim turns up;
he’s kinder.  They play on a table, a cloth the color of red clay.

Red ocher: the color of their faces, hands, cork, edge of a shelf.  The eye
traverses, back and forth.

Three years before he died, people in Aix left copies of a news review on Cezanne’s
doormat.  Messages told him to leave town, his vision a “dishonor.”

Somewhere in Mongolia, a boy sleeps against the flank of a white
reindeer, the rack in velvet.  Children train reindeer small as fawns.  The only Dukha
left, forty-four families, tame wolves, bear, hunt with eagles on the backs of reindeer.

In Haicheng, a ring of quakes, like skipped
stones on water, warned them.  Air
way below zero, snakes wound out
of their burrows, froze in snow.

A squall of squawks, cheeps, massed as
all the birds rose up, out of the trees, when
the water went still. He followed the birds
uphill, wall of water taller than his hotel.

Klaverns roasted a pig; stroked banjos,
burned a sixty-foot cross wrapped in burlap,
doused in gas, stood in a ring before
they tossed their torches at its foot.

they swipe air with their forelegs,
a round house punch with claws, bring
down boar, swallow goats whole.  Teeth
tear a horse’s belly open, leave poison.

People bit into me, left venom.  I make them
characters on the board of the long game.
Meantime Asheville Water calls; we’ve a leak.
Somewhere between their meter under

a metal lid at roadside, and underground
pipes that run a quarter mile to our cabin.
It’s up to us to fix it.  Mahjong includes green,
white, red dragons.  Each wall is lined with tiles.

The shots I stick myself with: liquid red
as incised tiles, painted with the dragon.
Virus inside my cells, a wall, a wave I drive
back with my will.  A hawk swoops low.

Seen from a satellite, a green moss, state wilderness,
we’re right close to the reservoir, no road threads, only branches,
Farley’s word for creek, or stream. Farley’s buddy lived
top of a ridge, smelled something rank, laid out, in woods
behind his mobile home: bread, apples, sugar buns, venison.

He’d bang a stick on a trunk, count ten, whack again.  He lost
a few dogs, found just heads, just paws, then at the tree line,
a stillborn, two feet, with a curled tail, hairless, a small monkey.

Farley’s seen one, up to the watershed, tall, black, didn’t look like a man,
cleared a six acre field in a minute.  The reservoir is off-limits,
a high chain link gate blocks it; you’ve got to get a code to clear
it.  But those folks have plaster footprints, bigger than bear,
way bigger than my husband’s feet.  Even sitting at my

computer screen, some motion pulls my eyes up & along the edge
of the cut bank a cub trundles.  When I step onto the deck,
turns towards me, goes bashful; he’s never seen a human.

It was February; snow knee deep, Farley climbed.
At Big Fork a buck leapt and leapt again, so he couldn’t get
a bead on him, but shot a coyote, loping the game trail.
Meteors hit the ground, sparked into the valley.  Left
of a rock face, a cave, inside: three pair of green eyes.

On Wikipedia a black man’s penis shows two sores,
first sign of syphilis, which can erupt into nodules
all over the body.

I had a student once, warts
over her face, hands; we sat in a circle to discuss
Othello.

In Manet’s Port de Boulogne there is no
barmaid from the Folies Bergere, no Olympia,
to remind us he and his father, the judge, died of syphilis,
only sails’ black shrouds at the Quai, under a round
moon.   Fishwives’ cotton bonnets glisten the white
of Olympia’s skin, while her dark-faced maid
proffers a sent bouquet: peony, anemone, ringed in
lavender; white brushstrokes may be gardenia.

A black cat signals she’s a prostitute, rears near
her satin mules.

She wears his mother’s bracelet;
it dangles a glass locket of Manet’s hair.

When I saw this picture,
it took my breath.

Stars are buttoned white.  White
pigments pool beside the hulls.

By 1883 Manet’s leg
blackened with gangrene; when they touched his toes,
the nails fell off.

They watched the same in Tuskegee.

Years ago a friend unclasped the lid
on a black mirror, a tool of the occult she’d inherited;
I believed her.

It was like a relic, its dark round indelible.

“Beauty” in poetry is a reflection of my own aesthetic, which concerns the tradition of the “sublime,” so for me, in the same way life itself is often composed of oppositions or paradoxes, beauty is both an expression of the gorgeous and the terrible, a reflection of the way in which nature works.  I live in a cabin in the woods and see that beauty, the patterning on the back of a copperhead, for example, along with its potential for harm. 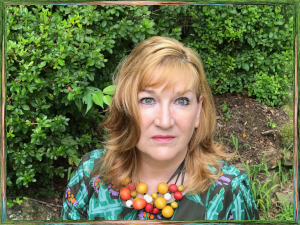