Are We There Yet?

I was five-years-old the summer my parents rented a house in Mattituck, New York. As long as the weather was good, we’d get to spend every day digging in the sand and swimming in the bay. The drive from Queens was only an hour and a half, but those were the days before cars had air conditioning. Even in the early morning, the air blowing through the open windows felt like the hot breath of a panting dog. Sweat beaded up on my skin, gluing my thighs to the yellow plastic seat of the tan station wagon. My brother sat next to me, but he was only two, too young to complain about the heat. “Are we there yet?” I asked as the car pulled onto the Northern State Parkway. “Not even close,” my dad answered, adjusting the mirror so that he could see me. “Are we there yet?” I asked again after five minutes and then every five minutes after that until finally he answered, “Yes.”

The wooden “country” house was surrounded by grass and trees. It was very different from the attached brick house in which we lived. Stepping out of the car felt like stepping into a new world.

Mom opened the cabinets in the kitchen. Wrinkling her nose in disgust, she exclaimed, “Oh, how disgusting!” We came running into the kitchen to find her holding a grease smudged glass up to the light. Crusty food clung to all the dishes and lipstick marks marred the rims of cups. Immediately, running the hot water and filling a basin in the sink she sterilized every dish, glass, cup and piece of silverware. We could now move in.

Sam lived next door. Sam was an excitable friendly black lab. Whenever we were out, she always came to play. My parents bought a box of dog biscuits specifically for these visits. So as to not over feed her, my dad would snap a biscuit in half. My brother – smaller and more tentative than I around dogs – always got the bigger piece. This way his fingers would not get caught between her teeth.

At the beach, Dad dug a hole. Dad always dug me a hole in the sand. I spent hours jumping in and climbing out. Sometimes he dug so deep that he hit water. The explosive splash as my feet crashed in the puddle thrilled me. It was my very own pool, my own paradise.

The basement was dark and smelled of mildew. I didn’t go down there often, only when I wanted to play a board game. The games were stacked sloppily on a self. We only played when it rained or sometimes at night. The smell of old books takes me back to that basement.

“Monster,” my brother screamed and we all came running. Crouched down on his haunches, a look of fear flashed in his eyes. From a safe distance, he pointed to small shelled creature. It was the first time he had seen a tortoise.

My uncle — my dad’s brother — owned a small yellow summer house in Cutchogue. It was one town east of where we were staying, a ten minute drive which felt like forever. My aunt and my much older cousins spent every summer at the house, living only a few short paces from the bay. On the side wall of their porch hung a decorative fisherman’s net filled with various seashells. I loved looking at it, and wanted one of my own; one that would have looked sorely out place in our city house.  Standing in my uncle’s garden, the smell of ripe tomatoes permeated the air. While he spoke to my dad, he plucked a cherry tomato off the vine and handed it to me. I bit it in half and the juice dribbled down my chin. The smell of tomatoes still reminds me of that garden; I can still feel the juice lingering on my skin.

My dad had to return to the city to work. He took the train leaving the car for my mom. She didn’t drive. The thought of doing so frightened her. We could walk to the beach if necessary, but driving would be much easier considering the amount of toys and food we always brought. Dad hoped that the “country” streets, with fewer cars and pedestrians, would encourage her to get behind the wheel. That first morning, riddled with anxiety, my mom decided to drive to the beach. Even as a small child, I was surprised. From my perch in the backseat, I watched her closely, carefully. Her hand shook as she adjusted the mirror and slowly backed out of the driveway. The sky was gray as we pulled out onto the road. Slowly, my mother drove. Slowly, tentatively, she parked. And when she turned off the engine she released a loud sigh. Then god, fate or whoever controls the weather exacted a cruel response. Before we could exit the car and wander down to the sand, rain began to fall. Tears in my mother eyes, matched the rain falling from the sky. Hoping it would stop, hoping that her brief conquering of her fear would not be in vain, she led us to the concession stand. At a picnic table in the shelter of a beach umbrella, we each ate a cup of vanilla and chocolate ice cream. When we finished the ice cream, the rain still fell. Completely crestfallen my mother ushered us back to the car. In a hushed and painful silence we went home. It was the last time she ever drove.

Since my mother would no longer drive, we caught a ride with my aunt to the train station on Friday evening to pick up my dad. “Did you bring a penny?” my cousin asked as we stepped out of my aunt’s car. I looked to my mother who always carried a treasure-trove of change in her purse. She handed me three coins. My cousin instructed me to lay them on the rail. I did as I was told and then stepped back when I heard the blare of the whistle.  When the trained pulled out of the station I raced back to the tracks but my pennies were gone. “Where are they?” I sobbed. Without answering, my cousin sifted through the rocks on the tracks. Suddenly smiling, she raised a copper piece up to the setting sun. The coin was oblong and flat, completely compressed and stretched by the heat and weight of the train. I kept those coins for years, but I can no longer locate them.

A cricket got into the house and chirped incessantly. One evening, my dad, leaving me and my brother in the kitchen, followed the chirping. When he returned, silence filled the house. The cricket was gone. Seeing tears in my eyes, Dad told me the cricket was still alive; he had removed it to the backyard. Years later, the truth slipped out. Dad tried to save him, but the cricket was fragile and Dad was never gentle.

Don’t Ask Me Why?

We rode past that one intersection every day on the way to the beach. I remember it – or was it a traffic circle – because of the purple flowers that grew in the center of the junction. As dad drove, Billy Joel sang “Don’t Ask Me Why?”

It was late in the evening and we were the only ones left on the beach. In the distance, my dad saw a family of swans. They swam towards us and boldly stepped out onto the sand. We fed them bread from our leftover lunch. In my excitement, I got too close. One of the adults spread his wings and hissed. My mother grabbed my arm and pulled me back. The swans solemnly swam back home.

We followed my uncle and his family to the Hamptons so that we could spend a day at the ocean. When we arrived, the wind whipped across our bodies, sand pelted our faces. We covered our eyes and squinted into the horizon. The beach was deserted. Lifeguards had posted hazard signs warning people not to swim. One gust nearly knocked me over. The adults decided to return home to spend the day at the bay instead. Five minutes into the return trip, my brother screamed. His flip-flop had fallen off in the wind and he wanted it back. Dad turned around doubtful that we’d find it, but there it was waiting on the white line of a parking spot. It was luck, no doubt, that allowed us to recover it.

I didn’t want to leave. I spent the last day in Mattituck – knowing that it was the final day of summer vacation — in a fevered pitch of crankiness and temper tantrums. When my dad asked me to fill in my hole because it was time to go, I threw myself on the sand, kicking and screaming, refusing to comply. On the way home to the city, the heat in the car was oppressive. We listened to the radio and my mother sang along – off key as always – to “Itsy Bitsy Teenie Weenie Yellow Polka Dot Bikini.” I looked out the window and couldn’t stop crying. Why couldn’t summer last forever?

Beauty is kindness. It it the boy that holds out his hand to the bullied child on the playground. It is the man who buys lunch for the homeless. It is woman who rescues animals. The parents that open their hearts to an orphan. The community that embraces refugees. The girl who raises her voice to protect the weak. Beauty is the smiles that are sustained during the storm. 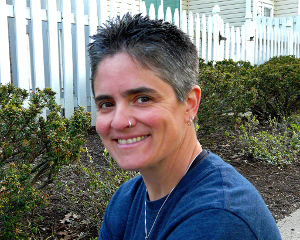 Elizabeth Jaeger has recently earned an MFA degree in creative writing from Fairleigh Dickinson University. Her work has been published in Boston Accent Lit, Damfino, Inside the Bell Jar, Blue Planet Journal, and Italian Americana. She has also published book reviews in TLR Online.