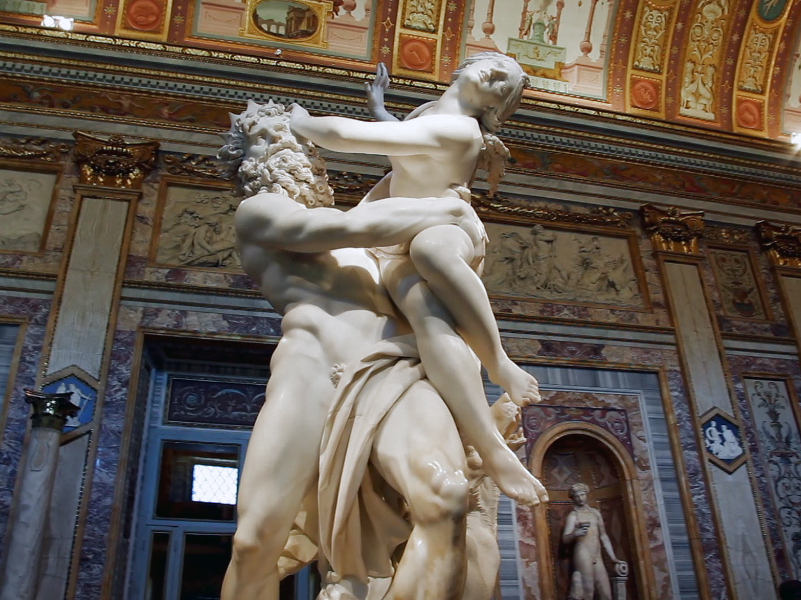 Pebble-bruised Persephone perches on the bank,
rasping her golden feet across the creekbed,
her laughter fragile as consensus,
fascination hunching her shoulders.

Her mother sits sentry beside her,
but mirror-gazed Hades craves something
more godly than despoiling innocence
as her fingers nimbly manage the friction

of line against reel—then every string
of her is startled by the shattering
of the surface and the exposure of the fish.
A fit queen for his uneventful vaults,

where nothing moves but causeless ripples,
this girl so readily wounded
by the sandy particularity of things that decently,
behind a curtain of hair, she recoils

from her fish even as she scrabbles avidly
at scales that go on rising skyward—
it has no eyes, its tail runs on springs
& it pulls his chariot. Persephone soars,

hauled aloft by the rod her hands still clasp
and on the ground Demeter heavily rages,
yellowy loud with curses as the old man
unhurriedly reels her daughter in.

commentary from their steady keepers:
“it’s fixing to be another good year,”
or similar, whole utterances as single drops
shed into the general flow, untroubled

by the thornily agitating necessity of names
parting around something not wholly tamed.
So, Orpheus surreptitiously makes such rapids
as he can before her harpies interrupt him.

He moves the blazes marking familiar bowers
to provoke inappropriate remarks from the keepers:
“looks like rain,” they haltingly pronounce on
his ripe apples ready to fall out of cloudy poplar fuzz—

yes, pervert Orpheus cracks open unspoken seeds
and teases out the ramifications he prefers
before practical usage can prune them
and studs the space beyond the pale

with scraggly desert gardens. It’s there
in the grey veil between domains that
gallant Orpheus makes his stand and sings
his challenge. Hades doesn’t even slow down,

just sics his assassins on the boy, his
minimal nymphs, the merest sketches of sex,
but those curves are graphed gravely enough
to get under any mortal poet’s skin

and attenuate his tendons till they snap
and in a tantrum of black and tangent fingernails
scatter far and near his hearty limbs,
leaving only his throatless song intact,

windblown machinery of slotted notes Persephone
can operate, even through the whorl of chariot wheels
& replay his prayer: hang in there, girl, I’ll be damned
if you aren’t the most captivating captive I ever saw.

Femur-caressing Persephone talks to Orpheus as she explores
the apocryphal crypts of Hades’ chronically uncultivated undercroft
or maybe to a model Orpheus, an orrery strung
with old, associated words that still sing

together despite being severed, something akin to
unused shipping lanes still freighted with meaning
or stepping stones from which one can infer
the bright wet white of an absent river;

such things are ambiguities this deep in Hades,
where the dead souls grow harder to distinguish
from the surrounding stygian infrastructure—though their
unextinguished significance sometimes stings the singular eyes

of this scandalous goddess who dons no respirator to descend
in quest of inspiration profoundly lower than the distinct
and leaf-veined souls of the new-culled would
ever dare blow, and scan their elders into seams—

yes, spectral co-conspirator by her side, Persephone parses
the wracked and sunken treasuries of Hades for titans,
though her keen fingers can’t glean so much as a single
knucklebone—but surely a titian should leave lots of pieces!

“Maybe they never lived at all; that would serve me right.
Maybe titans are just a placeholder in a protection racket
the Olympians are playing at from atop their vaunted anthill,
meant to render their heavy shadow merely penumbral.”

No way, girl—it’s just that titans have always gotta be dead,
otherwise we’d call them gods—but dead’s a relative term—
that’s why you taste something titanic on your old man’s breath
but thirsted for it in your mother’s terrestrial milk—

Uranus and Gaia were named after the abysses they crawled out of,
their problem child Tartarus for the one they flung him in—
Hades too, who drew the short straw at the start of this cosmos—
so tell me, how much of who we’re standing in do you recognize?

“Person” means “a sounding through” in Latin, so when a person thrums at the same frequency as the membrane she sounds through, harmony results, and her nervous system rewards her with pleasure. That’s an evolutionary necessity, like how the nervous system must reward dining and lovemaking. She calls the harmony “beauty,” but doing so disquiets her. A person has an ambivalent relationship to language, because it’s the medium in which her mind floats. If the membrane is the surface of the earth, language is her little pond, which makes it permeable. That’s uncomfortable, because even a big, deep, silty pond like English feels like a fishbowl to a fish as clever as her. It’s also indispensable to beauty, because sound needs a medium to vibrate through, or there’s no hearing it as harmonious, and a person needs a medium to contain her or she will have no point of reference, no shape, be an amoeba and not a fish.

Early roboticists thought it would be very easy to teach a computer to see, but it turned out to be nearly impossible. Early philosophers thought that reality was composed distinctly, of objects, because they didn’t have computers to serve as dull-witted pupils and had to make do with persons. In fact, the reason our person can see the chair isn’t because of the chair, or, heaven forbid, because of chairness—it’s because of those legs of hers; she means to sit on it. You have to be an agent that interacts with objects in order to see objects, and you have to be a person in order to see beauty.

Poetry is the activity of making the medium and the membrane resound harmoniously. The best way to do that is to talk about what words really mean, so we can watch them meaning, in a way we don’t care to do when we use them casually. The titans in my book are the very old pieces that commonday words are made of. Those commonday words are the Olympians. The Latin word “spiritus” is a titan. It has two definitions in the dictionary on her desk, “breath” and “spirit,” because it wasn’t broken yet and those two were still the same idea. A Roman saying “the breath has gone out of her” was stating a brute, mechanical fact, not waxing poetic. The word “inspiration” is an Olympian; it says “the breath has gone into her” without even knowing it, but it can be reminded of what it means, and the two estranged pieces share a harmony properly their own. I find the word “person” very terribly beautiful. 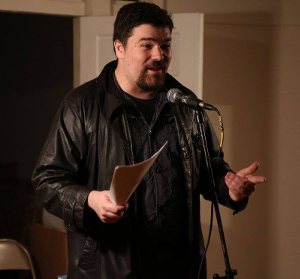 Isaac Stackhouse Wheeler is a poet and translator best known for his English renderings of prose by great contemporary Ukrainian writer Serhiy Zhadan with co-translator Reilly Costigan-Humes, which have received positive reviews from the Times Literary Supplement, The New Yorker, and The Los Angeles Review of Books. His poetry and translations have appeared in journals including Coldnoon, The Missing Slate, and Two Lines. More at: soundcloud.com/blackboxpoetry.