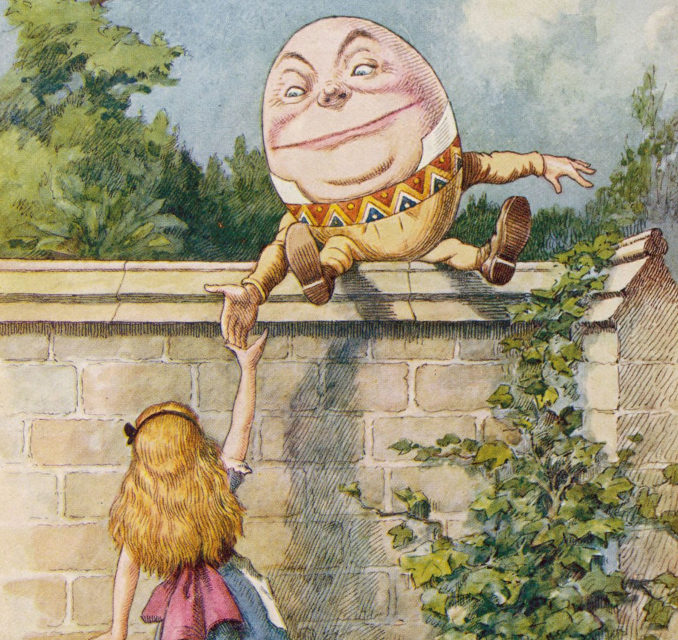 The Words Strike Back

Words, words. Everywhere you looked. Nouns, verbs, adjectives. Union Hall was full of them. Even the little conjunctions had come–ifs, ands, and buts. They were all there. Waiting for the action to begin, a strike to be called.

“Did you hear?” one small word gossiped to another while they waited, “he actually said that when he uses a word, it means ‘just what I choose it to mean, neither more nor less.’”

“He didn’t!” his companion exclaimed.

“Did Glory come to hear of it?”

“I expect she was livid.”

“Well, she didn’t take kindly to it, I can tell you that. She comes from a fine lineage–a Latin etymology, and cousins in the verb class.”

“Hmm,” his companion said, “Latin etymologies are not so uncommon. Why even I have–”

“Glory,” the first word interrupted, “has a full nine definitions in the dictionary (five as a noun and two as an intransitive verb), and ever so many synonyms. And none of them–none of them reads ‘there’s a nice knock-down argument for you.’ It’s absurd.”

“Hush,” hissed Shush, a bit of slang sitting behind them, “Organized Action is about to begin.”

The words looked up at the dais and at Strike, who was at the podium.

The Strike was pounding a gavel for Silence who glared at the gathered words until they stopped chattering amongst themselves and settled down to listen. Action looked to be very organized indeed, and quite busy, shuffling papers about.

“Order! Order!” the Strike called. “This meeting will come to order!”

“No, no,” Order called back. “I’m here, aren’t I? The meeting needn’t come to me. I have come to it. Mohammed and the mountain, you know.”

Some words chuckled and others expressed surprise, for Order was not thought to have sufficient imagination for even this obvious display of metaphor.

Strike began his speech. “The time has come. The time is now. To talk of what, and when and how.”

“And why,” the interrogatives cried together. “Don’t forget the why of it.”

“And why,” Strike said. “But we know why, don’t we? We have only to look at poor Impenetrability, sitting here, to know the why of it.”

Impenetrability–sad and silent, his expression unreadable–sat in the front row of the hall.

“Come! Give us your testimony, old fellow.”

“You see,” Strike said, “he’s too worn out to speak. He’s been worked to death, poor soul. Worked until he’s too tired to work, then tossed out without so much as a pension. Come on, old man. Gather your energy and your wits. Speak up.” Strike thumped him on the head.

Impenetrability sighed, and with great effort, he said, “he told me I must take on the meaning: ‘we’ve had enough of that subject and it would be just as well if you’d mention what you mean to do next as I suppose you don’t intend to stop here all the rest of your life.’ Even she said that was a lot for one word to mean. I told him it was too much. Misuse. Abuse. But he wouldn’t listen to reason. He said if I didn’t accept his terms for the work, there’s others out there that would. Get on with it, or else.

“And there you have it,” Strike said. “The boss sits on his wall, high and mighty, so fat that he can’t tell his cravat from his belt, while he works us day and night turning our meanings inside out. To the world he makes a great show that he ‘pays extra’ for the extra work we do. But do we ever see it? No. You’re docked for this and docked for that, and if you complain that he’s making you perform work you never hired on for, you’re fired altogether. We’ve tried reason. We’ve sent delegations. The time for talk is past. It’s time for action.”

There was a murmur at the back of the hall, and the words at the front turned to see what was causing the commotion. Impact had entered the hall, and words were parting right and left, giving him a wide berth.

“What do you want here, Impact?” Strike said. “Isn’t it bad enough that you’re a scab? Are you a company spy now, too? Take note of him, brother words–he’s one of those as takes you out of men’s mouths so that he can encroach on other parts of speech at cut-rate wages.”

“Oh, pooh,” Impact said, “I was under-utilized. I wasn’t meeting my potential.”

“The words of a company-man,” Strike said loudly.

But Impact spoke more loudly, playing to the crowd. “The opportunity is there for anyone with initiative and imagination. You too can do what I have done. Anyone can improve himself, if only he shows a little ambition.”

“Oh yes,” Action called out scornfully, “anyone can get ahead on the backs of his fellows. I could go about ‘actionizing,’ I suppose, and put Take, For, On, With, and a host of other small words out of their jobs. Have you no shame? Stealing the work that Have should have?”

“Why should he have a monopoly?” Impact replied. “Have has enough other work.”

“Have, too,” Impact said to him. “Other than Is, you’re the busiest verb of the lot.” He turned back to the multitude of words in the hall. “There are nouns ganging up in teams all the time, combining to pool their effect. Some even moonlight as verbs.”

Moon and Light both turned red with embarrassment. Together, in one limp voice, they said, “some nouns are naturally more versatile than others.”

Impact ignored them. “Strike himself,” he continued, “is not above working as both noun and verb, and has even been seen to don a gerund and play adjective. But let me do the same, and you can’t stand it. You can’t stand that someone else is enterprising. That I have the moxy to get ahead. To rise above the crowd. Give it up. This is the future. Get with the program.”

Silence, who had held her peace all this time, now spoke in a dangerous whisper. “‘Get with the program?’ Just the turn of phrase I’d expect from the likes of you with your ‘impacting’ and ‘impact on.’”

“Ah,” Impact said. “Silence speaks. And loudly, despite the whisper.” Strike and Action were advancing on him, and while Impact spoke boldly, he edged backward towards the door. “Beware what you do,” he said. “I know your faces. And your names. And so does he. If you go through with this strike action, he’ll replace you all.”

Strike and Action were closing in.

“You won’t be able to work,” Impact warned. “Not even under a synonym.” With that threat spoken, Impact retreated out the door and away.

There was a great hubbub then. Strike called for order, but Order had left the hall. The words all began talking at once and there was no controlling them: “What an outrageous display. I never!” “Do you think he’ll really remember all of us? I was standing farther away, perhaps he didn’t see me?” “I refuse to be intimidated!” “I didn’t sign up for this much trouble.” “No, indeed, I thought we’d just put a little pressure on, but now, I just don’t know. I just don’t know.” “I’m leaving.” “No, you’re not.”

Making his way through this unruly throng, one lone little word struggled to reach the podium. When he did, he whispered something to Strike who banged his gavel one last time, calling, “Gentlemen, gentlemen, one of the membership has something he would like to say. Please. Have courtesy. Give him your attention.”

The words slowly quieted themselves and stretched to see who was about to speak.

The little word stood himself on a stack of dictionaries in order to be seen by the assemblage.

“I am With,” he began timidly. “Most of you have worked with me, I think. I am, as you can see, a little word. But still, I want to say that if we allow Impact to frighten us and prevent this strike, we will only hurt ourselves. Next thing you know, the infinitives will be split; the haves will be at odds with the have nots; meaning will reach a point of absurdity we have not as yet even imagined. I am only a little word, but I think we must go forward bravely. For if we don’t hang together, we may very well dangle separately.”

The words in the hall were moved. “Yes, yes,” they said. “We will all go. We will all go together. Each word with his brother, arm and arm, with all withal. And the words left Union Hall together to march to the Wall.

The strike did not last long. The words circled the Wall with their picket line. Humpty Dumpty sat on the top of the Wall–his legs folded like those of a Turkish potentate–and ignored them. The King had been informed. And the King’s men and his horses came riding at great speed to rescue this captain of industry. The horses and men kicked up a great dust and caused a terrible confusion. Words ran, choking, this way and that. Truth was trampled under the horse’s hooves. Dignity was set upon by men with swords. The mighty Pen was laid low. Still, Strike and Action, and two others–Push and Pull–pressed on through the fray.

“Get ‘im,” said Push. He pushed from the front, while Pull pulled from behind, and Humpty Dumpty, legs still crossed, rocked forward and back, and came tumbling down.

“They’ll have to catch us first,” Action said.

The four of them took advantage of the swelling dust kicked up by the horses to slip away and go on the run before their crime could be discovered.

Humpty Dumpty’s hospital room was clean and quiet. There were flowers in the window box, and the walls were painted pink.

“It’s a great honor,” the nurse said to him, “the king himself has come to see you. And just wait until you see who he’s brought with him–the captain of his horsemen. He promises that they’ll catch the knaves who did this to you and give them the punishment they deserve.”

Humpty Dumpty gurgled and followed her with his eyes.

“There, there,” the nurse said. “Don’t strain yourself. It will come right in the end, love.”

She opened the door and bowed low to the king and the captain of the horsemen.

“Is he conscious?” the captain of the horseman said. “Has he named the varlets who committed this foul battery upon him?”

The nurse shook her head. “You may visit with him,” she said, and then in a whisper, so as not to upset the patient, “but best not to expect much sense from him. The words don’t come right, but backwards and peculiar, the meanings all askew. Injury to the head.  Aphasia, you know.”

I am not drawn to the familiar but to that which is different, whether a different geography, a different culture, or a different perspective; that is, a different way of seeing. For me, in writing, it is beautiful to make the empathetic leap, living in someone else’s skin for a while. Beyond that, beauty is a perfect wedding of style to theme and character. But I don’t think one achieves that perfection by “working” at it. Rather, I need to play—play with ideas, with words, with characters. Like Alice after she has passed through the looking glass, I can only get to the garden by walking away from it. 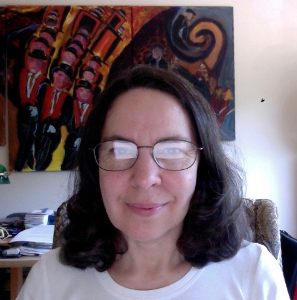 Jessie Seigel is an associate editor at the Potomac Review and writes book reviews for the Washington Independent Review of Books. Her fiction and poetry have appeared in Ontario Review; Gargoyle; Elan; Response, A Contemporary Jewish Review; and the anthology Electric Grace. Seigel has twice received a fellowship from the D.C. Commission on the Arts and Humanities. She lives in Washington, D.C. More at: jessieseigel.com.