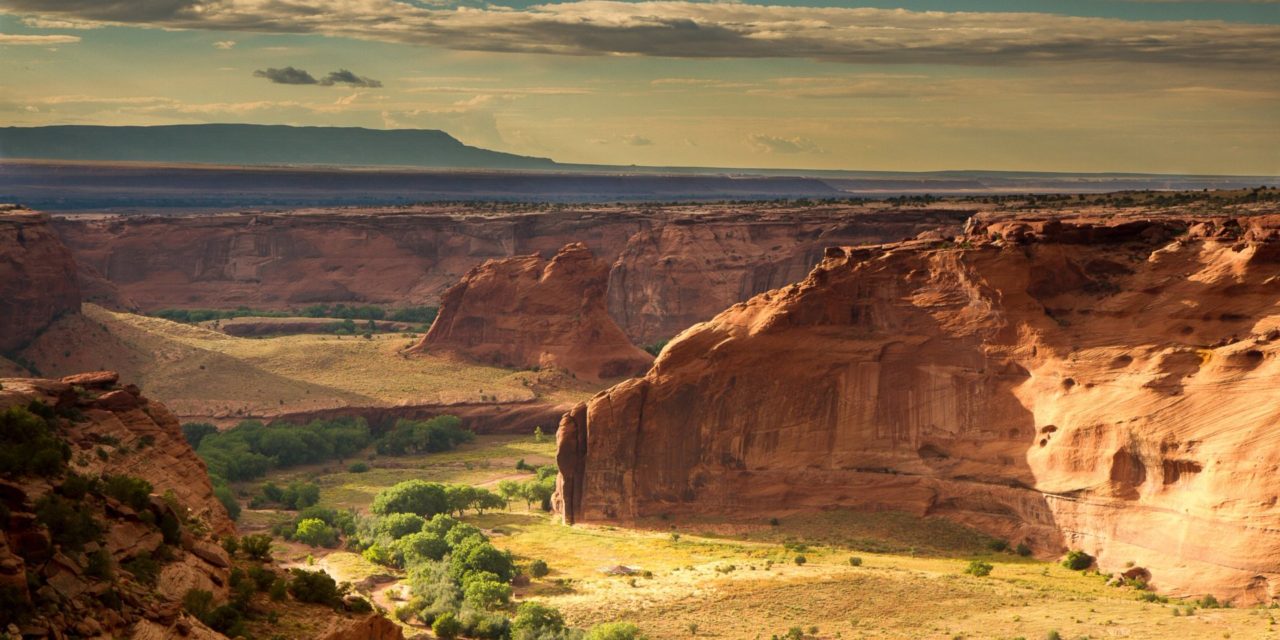 Fleet of foot, arms pumping,
we run towards the first light,
our cries in the dawn a prayer
opening our internal passages,
all of creation before us—
the slivered, sinking moon,
canyon, cedar, and sage
scenting the desert air,
watched over by eagle and bear,
bobcat and mountain lion.

Our feet pound the sand,
first cold, then warm
as the sun rises, and canyon walls
glow pink and red
where the ancient ones
carved pictures into the rocks
of the canyon where our families
still herd their sheep
and grow corn and melons,
apples and cherries.

We run because our teacher
ran here once in the August monsoon,
as the wind shifted from the southwest
and brought a soft mother rain.
Under a grove of trees, he spooked a herd
of wild horses that took off,
adults closing ranks behind the foals.

Filled with rainy energy,
our teacher caught up with the horses,
and they parted to let him in,
their sweaty flanks rubbing his skin,
as shoulder to shoulder, nostrils flaring,
horses and human ran as one.

They ran for a blink of eternity.
Just short of the canyon mouth,
the horses all stopped,
as if toeing an invisible line,
ears pricking, pointed at him.

He breathed their vital presence
and knew them for the spirits
of the high school runners
he’d nurtured and encouraged,
until his team was destroyed
by school politics and jealousy,
and his runners disbanded.
This is why he created this race
and inspired us to run in it,
as Navajos have always run,
for the blessings of mother earth.

Thirty-four miles through sand and scrub
up a steep path where it’s hand over hand
to the canyon rim, along the ridge
and back through red river washes,
past willows and cottonwoods,
arbors of birch and Russian olive.
Deep in the canyon, a black bear
ambles up the sand path, and we dart
into the woods until it’s gone.

When the fastest among us start to flag,
a dog appears, an ordinary rez mutt
with brown-and-white fur and intelligent eyes
running beside us to give us strength,
until he disappears on the canyon rim
to reappear hours later when an older runner,
the last straggler, slogging through sand,
emerges through afternoon haze,
the dog keeping pace next to him.
So with the slowest as with the swiftest,
all of us finishing in beauty.

Come down to the lake with me.
Real winter is here at last,
ice crystals and freezing fogs,
the sun so bright it hurts my eyes.

Veils of mist like gossamer silk
drift over snow that blows over ice
where our dogs chase after each other,
making the most of what they have,
be it a stick or a snowbank.

Growing up in the South,
she never felt she fit in,
being way too serious
and none too popular.
She came north to be educated,
and, leaning to the law,
clerked for a federal judge
and joined the Justice Department.

Reared among D.C. sophisticates,
her daughter returned to the South.
All that the mother had fled,
her daughter embraced—
football and frat parties,
good old boys and good-natured girls.
Prettier than her mother
and not so serious,
she countered blandness
with refinement
and reconciled her mother
with what she had rejected
and what had rejected her.

A Cento after Virginia Woolf

Their boat tossed on the waves,
and when he looked up,
it was not to see anything,
but to pin a thought more exactly.
Then his eyes flew back again
and he plunged into his reading,
tossing over page after page.

From her hand, ice cold, held deep in the sea,
there spurted up a fountain of joy,
and the drops fell here and there
on the dark, slumbering shapes
of an unrealized world turning in darkness,
catching here and there, a spark of light.

Let it come, if it will come—
the jar on the nerves, the thing
before it has been made anything.

Her thought expanded like a leaf in water
standing on its end with gold-sprinkled waters
flowing in and about it—
a little island rocked round by waters.
She gazed over the sea, at the island.
The leaf looked small and distant.
It was losing its sharpness.
Dabbling her fingers in the water,
she murmured dreamily, half asleep.

A row of rocks showed brown and green
through the water, and on a higher rock,
a wave broke, spurting up a column of drops
which fell down in a shower,
and they listened to the slap and patter,
the hushing and hissing sounds
of the waves rolling and gamboling
and slapping the rocks like wild creatures
who had tossed and tumbled
and sported like this forever.

Frail and blue, the leaf-shape
stood on end on a plate of gold
like the vapor of something
that had burnt itself away.


From ruined valleys wound by rivers
lined by riprap and slag,
whose steep banks overgrown with vines
are like jungles in summer heat,
where the stench and dust and dirt
are in the air one breathes,
and from higher up in the hills and hollows
where the roads are few and poor
and strewn with boulders,
and people stay put for hundreds of years—
from these tight-knit communities
and hard-to-reach places
came this miracle bread
raised without yeast.

A pinch of table salt,
saleratus, or baking soda
added to a bit of cornmeal,
milk, and flour; or a couple
of sliced potatoes, a teaspoon of sugar;
or lentil or chick pea flours
starts the rising.
Once a baker used tree bark,
and it turned out all right.

A mystery in the wild microbes
makes the starter foam and gives it flavor,
turning something smelling rotten
into something so delicious
that dying men and women
recall it with nostalgia.

A fickle fermentation
that doesn’t always work;
moods and weathers alter it.
The starter can’t be left too long
or used too soon,
the baker ever-watchful
for the window of time
to add warm water and flour
to make a sponge
and wait for it to foam again.
Add more warm water and more flour
to knead a dough, shape into loaves,
set till light, and bake in an oven.

The best way to eat it is toasted with butter,
the food of memory in its simplicity,
this smell and taste redeemed from the past.


I only had a decade in Glen Canyon,
from my first visit to when they destroyed it.
In that blissful time when I was a river runner,
I swam in its potholes and waterfalls
and explored its hundred side canyons, each one unique.
The rapids and the breezes blowing over them
spoke to me like dear companions.
When I was with them, I never felt alone.

When they drowned that place, they drowned my whole guts.
I will never forgive the bastards. May they rot in hell.
My human race betrayed me, greedy fools
with the mania to destroy all the sanctuaries.
I don’t care if we’re all blotted out.
I’d rather be a coyote.

Is beauty the product or the process? At one time in my life, I would have emphasized the beautiful object. While the circumstances that produce a work of art may be anything but beautiful, it makes no difference to the end result. I still believe this, but as I have gotten older, I find myself increasingly drawn to the beauty of the process.

In “Navajo Race in the Canyon de Chelly,” the beauty exists in the inspiration behind the race and the effort of completing it, which is available to all of the participants: “So with the slowest as with the swiftest,/all of us finishing in beauty.”

In “A Dog’s Life,” beauty resides in activity, the cavorting dogs that find joy in the moment, “making the most of what they have,/be it a stick or a snowbank.”

“Mother and Daughter” proposes a dialectic: alienated from the culture of her hometown which she considers backward, a young woman flees for more sympathetic surroundings. Years later, her daughter embraces what she rejected, enabling her to reconcile with her past and connect with her daughter. Beauty, I suggest in this poem, is to be found in coexistence and acceptance.

“Reading and Writing” celebrates possibility and inspiration, the life of the imagination, as it evokes an ineffable beauty before creation: the dark, slumbering shapes of an unrealized world turning in darkness, catching here and there, a spark of light. Let it come, if it will come— the jar on the nerves, the thing before it has been made anything. Born of isolation, need, and poverty, salt-rising bread offered an ingenious solution to the need for nutrition.

In “Salt-Rising Bread,” I pay tribute to one of our truly original national folkways—the staff of life, simple, humble, and often overlooked. Here beauty results from a fickle transformation, preserved in memory and perpetuated by tradition: A mystery in the wild microbes makes the starter foam and gives it flavor, turning something smelling rotten into something so delicious that dying men and women recall it with nostalgia.

In “Protest Poem,” beauty exists in the infinite variety of the natural world. We can find beauty only insofar as we connect to nature. 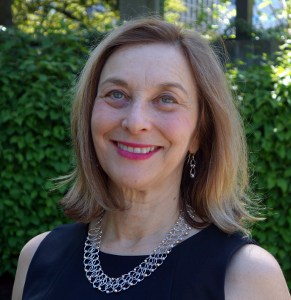 Anne Whitehouse is the author of six poetry collections.  Meteor Shower (2016) is her second collection from Dos Madres Press, following The Refrain in 2012. She is the author of a novel, Fall Love, as well as short stories, essays, features, and reviews. She was born and raised in Birmingham, Alabama, and lives in New York City. Her poem, “Navajo Race in the Canyon de Chelly,” was inspired by Michael Powell, “34 Miles Forward,1000 Years Back” The New York Times, D1, D7, November 13, 2017. You can listen to her lecture, “Longfellow, Poe, and the Little Longfellow War” here.