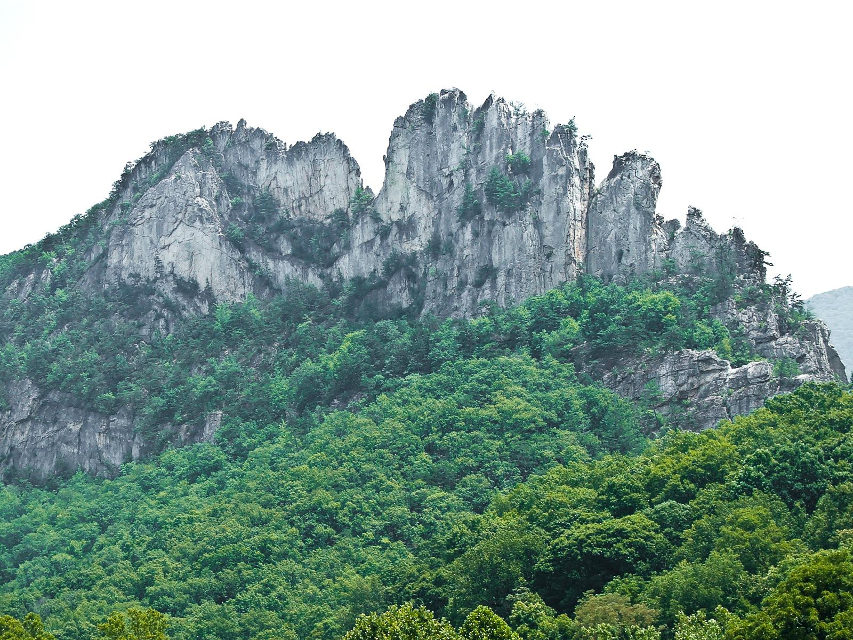 We begin by walking on a gravel road. This road will eventually lead to a smaller trail, which goes to the top of Seneca Rocks, West Virginia. We don’t continue down this gravel road, leading to the most traveled path; that would be too easy of a hike, and instead we take a detour. Our detour takes us to an area where I must do what I call “crab climbing”.

Crab climbing: it’s not rock climbing, but it’s not hiking either. It’s somewhere in between, a blending of the two. The terrain we commence crossing is just steep enough and rocky enough where I need to crab climb, using all four of my limbs, resembling a crustacean more than a human. Dale, my husband, doesn’t crab climb. Dale never crab climbs. He leaps upward easily, jumping, as if he were a mountain lion. Dale must have been a mountain lion in a past life – there is no other explanation.

After our upward journey has lasted for close to an hour, I begin to worry. “Dale, this is not the trail. What if we don’t end up finding the trail again and then we have to climb down all this way? I can’t do that. It’s too steep.”

I should know better by now, though. With Dale, a hike is almost never on the beaten path and is almost never easy. But he is patient (and pushy) with me. I worry and self-doubt, but I am always able to do like he says, and we always end up where we need to be. Dale will push me when I think I can’t and show me that in reality, yes, I can, and somewhat easily.

He looks down at me from above, farther up the rocky terrain than I, and says, “Brandi, stop worrying.” He says nothing else. Does he know where we are going? I don’t know, I only hope.

Up, up, and up. Crab climbing away behind my mountain lion of a husband. When crab climbing, I begin to know the rocks, the lichens, the mosses, and insects. These features distract me, and I forget that I am rising higher and higher in elevation. Eventually, I stop to look up and find myself in shock. SHIT. I need to go back to my crab position, immediately! We are high enough and steep enough to make me to feel uncomfortable. I resume my crab climbing, hugging the rocks closer than before, morphing into what looks like a starfish.

Eventually we reach a place where we can go no farther without proper climbing gear. Together, we sit on a large rock outcropping, and survey the scene. Sweating, I tell him, “I am not climbing the same way back down.”

Dale smiles and replies, “You don’t have to.” Then, he gets up, and starts heading towards a clump of rhododendron (West Virginia’s state flower) that have managed to get rooted among these rocks. I follow.

After bush-wacking our way through a thick rhododendron forest, we emerge on a goat trail along the edge of Seneca Rock’s large face. The rock is cool to the touch and comforting. I am glad to walk parallel to it and not up it. After ten or fifteen minutes, we come upon the designated trail to reach the top of Seneca. Of course! I should have known. Dale is a mountain lion, but I also think he has an internal compass that functions similar to those of migratory birds. Honestly, it’s amazing. How does he do it? I will never be sure, but I am always grateful for this strange ability of his. As for myself, I lose my sense of direction easily. Usually, when walking, I keep my eyes down, studying all that’s beneath my feet. Then I look up, and realize that I have no idea from which direction I was walking.

We stroll leisurely up the rest of the smoothly graded trail to the top of Seneca. Or, at least it feels leisurely compared to crab climbing up the rock for two hours. When we near the “top”, there is a wooden overlook. Beyond that, a sign that basically pleads, “DON’T GO UP ANY FARTHER. IT IS NOT WORK THE RISK. PEOPLE DIE.” Naturally, Dale must climb to the actual top, past the overlook where we now stand.

At first, I refuse. Dale begins climbing up and coaxes me to do the same. “Brandi, this is easy. Especially how cautious you are, you’re not falling anywhere. Come up here. That sign is for out of shape people who don’t know what they’re doing.” We banter back and forth for a few minutes.

Okay, okay, okay. I crab climb up, and yes, it is easy. The view is spectacular. We sit and admire the land. Those beautiful West Virginia mountains that I love so much. Oldest mountains in the world, wise beyond belief. Where my roots are planted deep, but my heart will never allow me to stay.

After climbing around among the rocks, sitting together, talking, and resting, we begin to descend, but on the designated trail. We are both happy to use the trail because by now we are tired. Plus, we are headed to see my Uncle Jimmy, and time is of the essence.

For me, beauty is a flash flood in the desert. The blooming of fireweed and arctic lupine. Beauty is turquoise, milky glacial waters rushing past alpenglow mountains. A vulture soaring in a cloudless blue sky. A sun-bleached bone resting in the sand. The way wind whispers through the trees. The smell of dark earth after rain. Beauty exists within the small moments of solitude I am granted in nature. 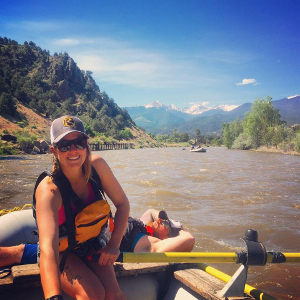 Brandi Jo Nyberg has spent the past several years wandering from place to place. She is a whitewater enthusiast, and spends her summers raft guiding on various rivers. In the winter, she hovers over her 1941 Royal Arrow Typewriter. Brandi Jo currently lives in Fairbanks, Alaska where she is pursuing an MFA in Creative Nonfiction and teaching at the University of Alaska. Some of her work has previously been published in American Whitewater, a nonprofit organization and magazine devoted to river conservation.