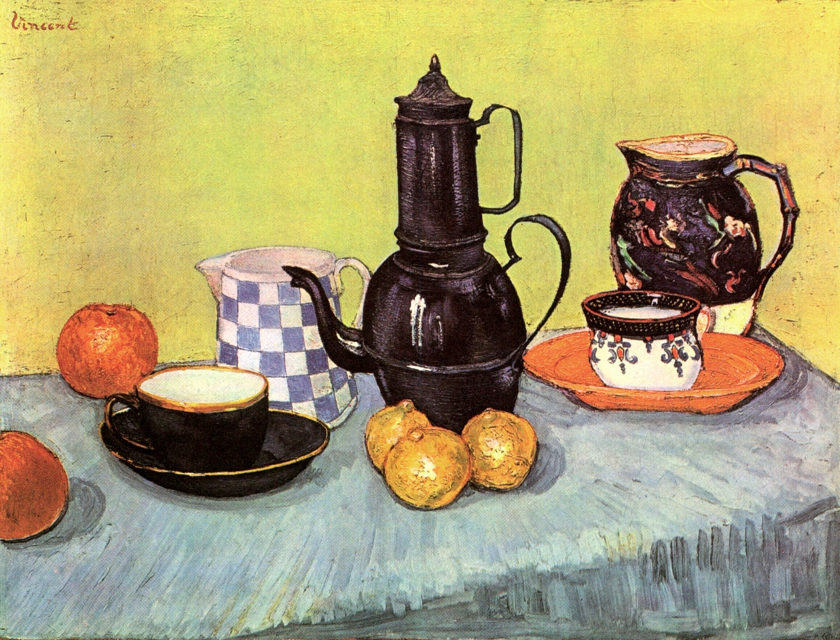 I believe I was ten when I first tasted coffee. It was after my parents happily concluded their Sunday morning coffee ritual on the small balcony of our seventh floor apartment. It was small and filled with geranium pots that blossomed throughout the year. My mother would wake up first and fix breakfast for us, kids. We slept in and were softly woken by the smell of hot cocoa drinks and French toasts. I sprinkled salt on mine, my brother generously poured honey. As we lazily savored this Sunday treat, my mother joined my father for their coffee on the balcony. Both of them were heavy smokers, liked their coffee black and kept to their whispered conversations. After breakfast, we had our half an hour Sunday cartoon show and we made certain nothing got in the way of this indulgence. All the outside clattering of voices and dishes suddenly came to a halt and the world stopped breathing. Tom and Jerry ruled our minds and mornings for a decade or so, until they became abundantly available, we grew and moved to Japanese anime.

Back in the late 1980s, my Romanian world did not spin madly on like a Tom and Jerry great chase. When it came to food, for instance, all good things were portioned and rationalized. We queued for puff balls and oranges and had a blast eating a loaf of hot bread before getting back home from the baker’s. Coffee and cigarettes were trading goods. We lived on food coupons every day and had become very inventive when it came to substituting flavors. For instance, we never had real coffee so we drank chicory instead, and meat was hard to find so we had instead many soy-based products, all of them GMO free. Real coffee got smuggled and was then passed along in exchange for services or traded with other products. Sometimes, it ended up in our cupboard as well. I remember the package always had a rectangular shape, a shiny golden wrapping and felt hard as a brick. We called it the coffee boy because there was a boy’s red silhouette on the package. I would put it against my nose, and through the layers of foil, I could smell something that instantly made my mouth water. I knew it was kept for a visit to the doctor’s. Back then, if you wanted to be given better treatment and possibly the right medicine straight from the doctor, you had to use coffee and cigarettes as an incentive. This made coffee a valuable asset and drinking real coffee a luxury few could afford. Yet, I felt drawn to it. Every chance I had, I would open the cupboard and sniff the package at length.

But Sundays or at least some of them, turned out to be magical. Without any explanation, my father would open one golden package of coffee beans. First, he smelled the contents as if to assess quality and put three spoonfuls of beans in the coffee grinder. Then, he softly rolled the lid on until it clicked and pushed the orange button. Noise similar to a dentist’s drill filled the little kitchen and my brother and I covered our ears grinning at one another. When it was done, my father got the small kettle ready, measured two cups of water, added sugar, and waited for the syrup to boil. My brother and I would steal away two or three beans from the package that was later sealed and put back into the cupboard. We crushed the beans between our teeth and tasted the earthly bitterness. We looked at one another’s teeth, pieces of coffee nibs coloring our smiles.

Once the show was over, Tom and Jerry left us wishing for more and talking about role plays. I always wanted to be Tom, so my brother was stuck with Jerry. One year younger than me and much shorter, he always complained about the obvious association. Eventually, when running out of arguments over who got to choose what, my brother pouted but eventually agreed to play along. This Sunday game of ours turned into a nickname game and in no time, everybody called us Tom and Jerry, a practice that persists even today. With Jerry out of sight, I would sneak back into the kitchen where my mother was doing the dishes and drip the remaining droplets of coffee from their cups. The dregs were bitter-sweet and I chewed on them until the roof of my mouth got dry. I would then refuse to brush my teeth for fear the mint would take over the caramel. As I would later find out, there was a shade of hazelnut that gave the freshness of the taste.

Years later, it turned out the coffee of my childhood was named JUBILÄUM MAHKAFFEE, a Viennese coffee famous for its sweet aftertaste.  It was a mixture of Arabica and Robusta created in 1962 to celebrate the 100th birthday anniversary of Julius Meinl Coffee. For years, I would find myself in places all over the world, shopping for coffee and always looking for a golden wrapping with the fez-wearing little boy logo.

An homage paid to the Turks who brought coffee in Vienna in 1683, the logo spoke of the mighty conquering Sultan, as well as the coffee maker. He was named Julius Meinl and his story began in 1862 when he opened his first grocery store, selling spices and green coffee in the center of Vienna. Later on, he became the first manufacturer to offer freshly roasted coffee which attracted famous musicians, painters and writers of the time. Freud himself is said to have been addicted to the black potion, saving coffee lovers the challenge of roasting the green coffee beans on their kitchen stoves. Success turned his little business into a modern roasting plant on the very site where the retreating Ottoman army had left the green coffee beans over 300 years before. Now it is considered Central Europe’s leading Coffee Company. Back then, in communist Romania, Julius Meinl and his little fez would occasionally sneak into our home, fascinating us and at the same time, remaining a forbidden fruit.

When I visited Vienna last spring, I had a piece of strudel and a cup of coffee in Café Hawelka, one of the famous Culture Coffeehouses. “Hey, Jerry, good day for a chase”, I texted my brother. “But first, come over, for a fill in.” He laughed in little yellow emoticons and wrote back that coffee always sounded good, except this mouse was going to sleep in a different time zone. It was late March and rain drizzled quietly on the crowded streets. People walked slowly, no umbrellas, large smiles on their faces as if they had aligned their interests to summon the belated springish sun. Inside Café Hawelka, waiters and customers were rummaging the premises and people were laughing and nudging. There was some clamor that felt different from the usual lack of commotion.

Apparently, this was the day when coffee could be bought in exchange for a poem. The poem’s language was not relevant, but coffee consumption was highly encouraged in the creative process. It made me smile to see all those people wracking their brains to write on paper napkins, half amused, half frowned. These were the perks of good coffee: challenging the limits of their creativity. My own dark coffee came in a white china cup stamped with the red fez silhouette of the boy Julius Meinl chose to embody the birth of a new brand. A large piece of apple strudel sat shyly by a half-filled champagne flute. It made the perfect blend for a poem. As I looked out onto the washed out little pavements, the Schonbrün park silhouette behind the tall roofs, I found myself thinking about the way coffee had been part of my life, its essence going beyond the stimulating effect on the human brain or other benign qualities. It has been part of a personal journey that connected me to the history of my homeland, the people I loved and the places I travelled to. I took a bite from the strudel and then a sip from the Julius Meinl coffee and the mahogany, Baroque air of Café Hawelka shrank into a couple of square meters of geranium-scented childhood memory. The silver pen next to the coffee saucer flashed against the shallow light: “When Tom and Jerry met Julius Meinl. A poem.”

The experience of beauty is personal and subjective for all people. To me, it is partly related to writing and it translates into an extension of my personality. I resonate to beauty in all its forms: visual, auditive, olfactory or taste related. I believe beauty is made of the way in which the human mind is putting its limits to test and the process of creation is different to the artist and the observer. It is consuming and intense, almost organic for the artist and it is bound to reveal or mesmerize for the observer. If art is the way in which the artist is grasping the world, beauty stands for the emotion it creates in the eyes and mind of the observer. The ability to respond to art translates into the act of beauty which is on-going and engaging. Although it is a matter of personal discernment, beauty is a reflection of the human nature and its creative manner of rendering its struggles, challenges, joys and universal questions. 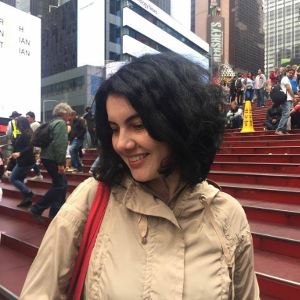 Clara Burghelea is Editor-at-Large for the VOC blog Small Points of Light. She is a Scott James and Jerry Cain Creative Writing and Social Media Fellow from Romania, working on a multi-genre MFA at Adelphi University. A poet and translator, she published in print and online, including in In-Flight Literary Magazine, Straylight Literary Magazine, Indiana Voice Journal, and Ambit Magazine under the pen name of Witty Fay. She had her first volume of bilingual poetry Nefelibata– published in 2014.