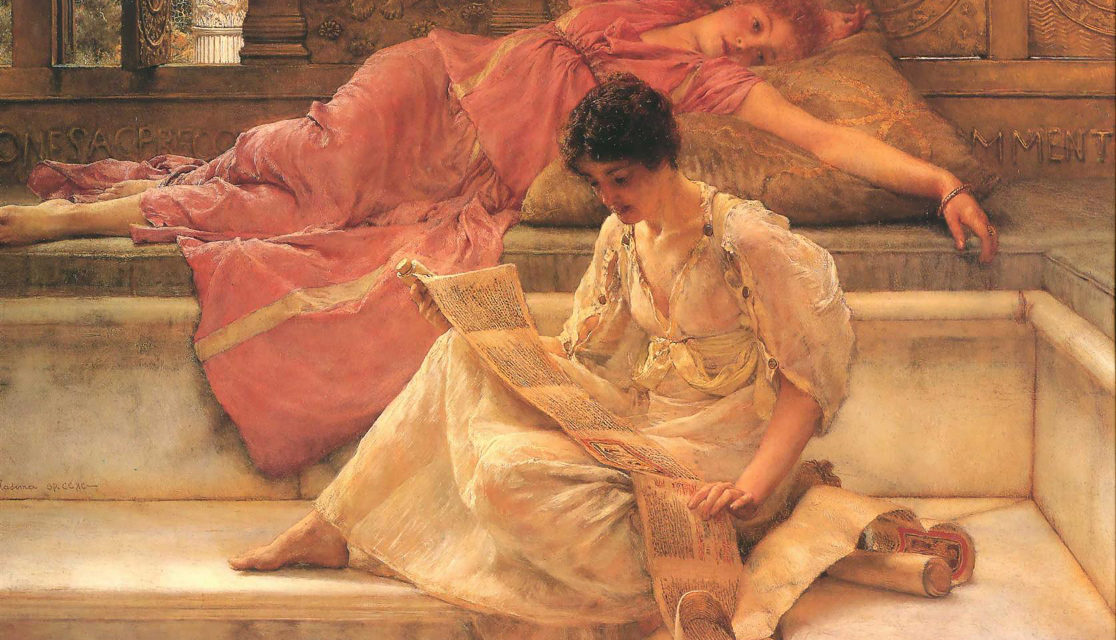 New Wings for the Muse

In an era when many time-honored literary conventions have become extinct, it is reassuring to learn that at least one literary genius is trying to re-feather the Muse by creating a new and vital verse form.

The inventor of the new form wishes to remain anonymous until his creation has swept the country, because, in his words, “My name might give it a quick burst of fame, but it might be just as quickly killed.  Certain critics have made themselves a name, some by attacking, others by defending me.  If they associate this new verse form with me, they will surely make it the subject of another war of verbosity which, as so often happens when the smoke of literary battle has cleared, may very well leave the prize they were fighting over–the art form–torn to shreds on the field.”

“That is a sad, but very real, possibility,” I agreed.  “I applaud the wisdom of your decision to remain anonymous at first.  Then, when your new verse form has become so well established that nothing can shake it, we will reveal your authorship.”

So I cannot at this time name the poet, but I can tell the reader that he has taught for many years at a well-known institution in New York State, and that, not unlike another literary innovator of nearly two centuries ago, he has long been a student of nature, as well as of books, in the Lake Country of New York.  His rotund figure has often been seen by early risers in the rural community of his residence as he strolls with his binoculars in search of birds to watch.  Therefore, let’s call him Professor Birdman.

I first became aware of Professor Birdman’s literary breakthrough when he and Mrs. Birdman visited our home recently.  Rolling his eagle eyes, which still shun the aid of bifocals, the professor delivered one of his poems with the flourish that many of his Romance language students well know.

“See what you think of this poetic endeavor of mine, Dr. G.,” he began.  When I nodded, he sonorously recited, with a weighty pause at the end of each line:

There was a moment or two of silence while I pondered the profundity of thought.  Then I said, “That’s really deep–but I don’t recognize the verse form.”

“Of course not,” he responded, and I thought his small gray moustache quivered with delight.  “I just invented it.  I call it the ‘Rhymie.'”

“Yes, and the form is as deceptively simple as the name.”

My interest was piqued even further, for I have long been an avid student of verse forms.  I can engross myself for hours in syllable-counting with Marvell’s octosyllabic couplets.

“Glad to,” he said agreeably.  “As I say, it’s deceptively simple.  Each line is composed of two to three syllables, every line rhymes with all the rest, and a poem consists of from three to five lines.  You see, any less than three lines would allow frivolity, and more than five would invite monotony.  But within these variations almost any effect is possible.”

“Yes, I think I see,” I agreed.  I was excited, but sternly repressed my impulse to cheer until I had more evidence of the form’s effectiveness.  “The form has the admirable terseness of the haiku or the cinquain, but it has much more flexibility.”

“Have you composed any more poems in this genre, Professor?”

“Just one more so far.  I invented the form only a few days ago–I should say ‘discovered,’ for I feel the form was there, simply waiting to be isolated, like radium.  Here’s the other poem:

When we had all stopped laughing, I shouted, “By Heaven, I think you’ve got it!  Your ‘and/or’ was an absolute masterstroke!  I’m convinced.  Endless possibilities, as you say.  Mind if I try my hand?”

“Be my guest,” he said graciously.

After a few minutes of intent mental composition, I recited, pausing like the professor after each line:

“Not bad for a first effort,” adjudicated the form’s creator, “but your third line needs work.  The addition of the extra syllable to ‘spinster’ was a nice touch, however.”

At that time my wife brought an apple pie to the table.  She waved away a fly while cutting the dessert, then served generous slices to the four of us.  We all enjoyed the pie in silence for a few moments.  After accepting the compliments of our guests on the quality of her baking, she recited with a twinkle:

“Excellent!” crowed the Birdman.  “You really have it, Marilyn!”

“Yes, very good, dear,” I said, though I was actually a bit chagrined that her first effort had elicited higher praise than mine.

Two days later I called the literary innovator to tell him I was thinking of writing a scholarly article about his brainchild.  He was pleased, and we discussed its presentation.

“Have you written any more Rhymies that I can quote?” I asked.

“Yes, I have another one that I just finished.”  Then, in his inimitable grand style, Professor Birdman recited:

The professor paused so long that I feared the poem was over, and not satisfactorily.  Then he completed it with gusto:

I burst into loud guffaws.  When I had quieted down, the professor asked proudly, “Do you really like it?”

“That is great,” I said, “–to add a seventh line.  But tell me, professor, doesn’t that violate one of your rules for the Rhymie?  It has six lines, instead of five.”

“Yes,” he agreed. “Perhaps we should add a footnote to the effect that, with subjects of great emotional intensity, the form could permit a moderate exception to the established rules.”

“Dangerous ground,” I warned.  “You know what has happened to forms in the past when romantics started stretching them.”

“I know, I know.  But exceptional subject matter calls for exceptional forms.  You do like the poem with six lines, don’t you?”

“I wouldn’t delete a syllable,” I affirmed.

Beauty meant so much to Dad (Delbert R. Gardner) on every level.  In many ways, Dad felt that appreciating beauty was one of life’s highest purposes–and the presence of beauty, one of life’s greatest joys.  He found beauty and humor in daily things, in the ordinary and the extraordinary; and when it struck him, he celebrated it in writing.  All of Dad’s work shouts with joy, “The world is a beautiful place!”  Life is beautiful, beyond compare.  Struggle, even pain do not diminish this, only make the beautiful (and the writing of it) more important.

So important did Dad feel the ability to appreciate beauty was to a life well-lived, that in a syllabus he prepared for his World Literature class, he stated among his aims “To nurture an appreciation of beauty, understanding, and compassion.”  Similarly, for his class “The Poet as Maker and Made,” Dad selected a passage from William Wordsworth’s Preface to Lyrical Ballads that describes the object of poetry as truth, and states that “The poet writes under one restriction only, namely, [. . .] an acknowledgement of the beauty of the universe. . . .”

As for the source of beauty, Dad found it everywhere.  Keuka Lake’s natural beauty, as well as its many nostalgic associations, made it “the most beautiful place in the world.”  His appreciation for human beauty went beyond physical appearance to the heart.  Dad raised us with this profound appreciation for beauty, including the ability to look beyond the surface to what’s truly important.  William Blake talks about “a world in a grain of sand,” and Dad could see that kind of beauty.  He loved the very tiny or very vast.  He was really impressed by the celestial.  At Keuka Lake, we’d stand out on the dock, looking up at the stars while Dad pointed out constellations like Orion, awed by the vastness of the universe.  He had an eye for the delicate, the sensitive, and the delightful!

While Dad had always been touched by beauty, whether striking or subtle, within the last year of his life, it moved him to tears.  He would appreciate it so much–even more so with his time on earth drawing to a close.  This would happen while hearing a beautiful piece of music, seeing a beautiful picture, or drinking in a beautiful view.  He loved beauty, and sought it out.  When he could no longer walk very far, my parents took local drives to see autumn trees.  There’s a particular sugar maple in their yard that flames the most gorgeous red each fall; Dad could sit in his favorite chair and look out at that tree.  He took great joy in life; and life, I think, is the nearest synonym he might find for beauty. 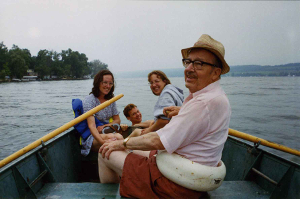 A veteran of World War II, Dr. Delbert R. Gardner taught English literature and creative writing at Keuka College in upstate New York; he considered Keuka Lake the most beautiful place on Earth. Over fifty of Dr. Gardner‘s poems and stories have appeared in The Literary Review, Poetry Digest, American Poetry Magazine, Provincetown Review, and more. A scholar of the Pre-Raphaelites, he wrote An “Idle Singer” and His Audience: A Study of William Morris’s Poetic Reputation in England, 1858-1900. His daughter, Adele Gardner, serves as his literary executor. Visit www.gardnercastle.com.