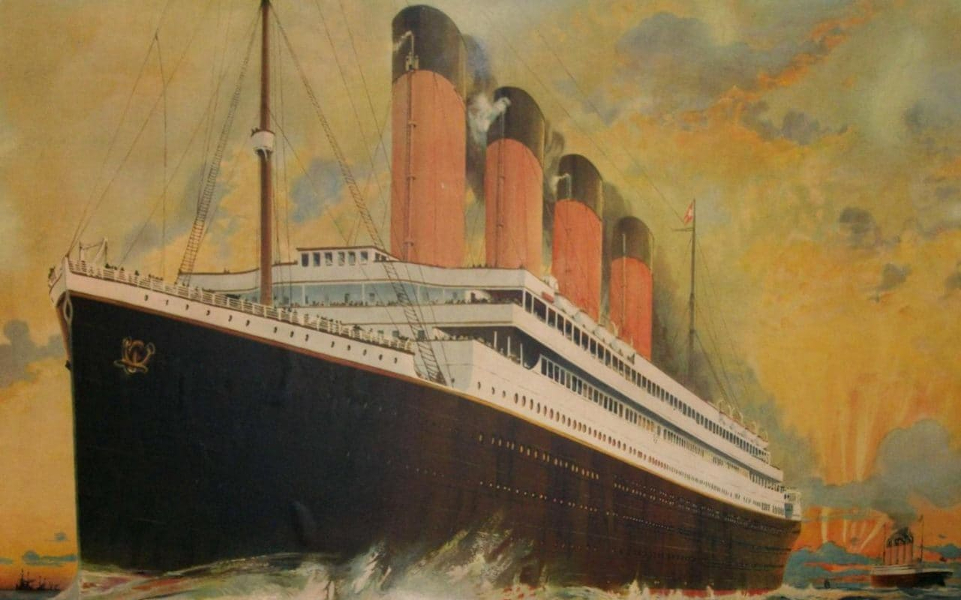 Façade: Four 90-foot hulls of glittering anodized aluminum
jut out from the central glass atrium, angling up to 72 degrees.

The shining rake of these scalene wings, clad in 3,000 metallic shards, thrills me. My gaze sweeps up out and my stomach lurches. The Titanic Belfast Experience creates an armature—the ship’s design—around the heartbreak of unexpected, catastrophic loss. I dread facing that loss in this experiential re-creation of the ship that capsized with 1,517 passengers on board, 300 of them children.

One month after the mega-ship struck an iceberg and sank April 15, 1912, my paternal grandmother, Elizabeth Mary Murphy, sailed to the United States from Queensport, Ireland. The port is known today as Cobh, and it was the Titanic’s last dockage. When I was too young to ask why, my gran’s terror of the ocean mystified me. Later I heard she was a convent-bred 17-year-old, thrust alone onto a vessel, bound for a maid’s work in Philadelphia. How vulnerable she must have felt, walking up the gangplank: slender, dark hair tucked up into a wide-brimmed hat, skirt raised modestly above button-hooked boots. Her mother had died in childbirth and her sea-captain father was gone, perhaps lost at sea, when her education by the nuns ended. She had to make her way in the world.

I’ve inherited her resolve. It propels me inside the building.

Atrium: On the wall hang 60 feet of acid-stained steel plates,
like those that covered the body of the Titanic.

This reddish-brown metal does not replicate the splits in the forward hull. Elizabeth’s fear of the sea drums in my blood. Does my trepidation also stem from my near-drowning as a child, dragged far from shore by a rip current? This anxiety has pulled at me for years, an undertow in a sea of unknowns.

My grandmother never talked about who she left behind. Her silence told me, It was hard. It came at great cost. I’m not going to make small talk about it.

In the Ellis Island archives, her ship’s manifest lists her hometown as a nonexistent Abbeylusi. I put myself in her boots, hear her thick accent. Could the town be Abbeyleix, where the Brigidine nuns ran a girls’ boarding school and the local factory produced carpets for the RMS Titanic?

In 2012, an Irish Times article proclaimed, “the leaving of Ireland became one of the real markers of Irish identity.” While males dominated emigration from other countries, “Ireland sent her daughters.” By the end of the 19th century, young, single women like my grandmother comprised 53% of the millions of Irish who sailed to New York.

A glass elevator whisks me to the galleries housed in those dramatic hulls. Their aluminum scales mirror the surface of the iceberg.

The Arrol Gantry hovers 200 feet above the shipyard.

My gaze sinks into a jagged void. Astride scaffolding, I fight vertigo. Workers straddled this kind of framework a century ago at Harland & Wolff shipyards. Like those men my grandfather, Joseph James Lynch, worked with his hands. He was a second-generation Irishman, and he bequeathed his mechanical aptitude to his only son and namesake. My father also made music, working the swing shift as a machinist, then playing piano in jazz clubs until closing.

Climbing into a gondola, I rest my hands on the safety bar. Suspended from the roof in darkness, my pod swings up and down a massive image of the Titanic’s hull. Recordings of welders and riveters clang and drill and hammer, and the sound melds into a pedal tone. Over it, voices tell how men went deaf from this work.

I can no longer remember the voices of my grandparents, who died almost 50 years ago.

And as the smart ship grew
In stature, grace, and hue,
In shadowy silent distance grew the Iceberg too.
-Thomas Hardy

In the fifth gallery I walk onto the deck. Opposite me is a wall-sized projection of the ocean. The railing vibrates beneath my hand and it lulls me into the role of passenger.

During my childhood, Elizabeth’s fear of the ocean was subsumed by her agoraphobia. Our walks to the bookstore ended and she refused to leave her house. Did the two fears simply converge? She spent day after day after day watching gray waves stretch to the horizon. Did that watching prompt panic about vast vacant water two and a half miles deep?

The Titanic’s distress signal went out at 12:15AM. It sparked a series of marconigrams between the doomed vessel and the Carpathia, a ship 58 miles away. Guglielmo Marconi’s wireless telegraph is credited with saving 746 passengers. Reading these dispatches and hearing the urgent cadence—dot-dot-dot-dash-dash-dash-dot-dot-dot—grieves me.

The ragged clicks cut off; the words blur before me.

The Titanic’s real tragedy? It lacked enough lifeboats. I am on that ship, climbing into the last lifeboat, lowered on the port side at 2:05AM. In the 15 minutes it takes the 46,000-ton liner to submerge, and two more hours before rescuers arrive, do I hear weeping? Or only waves lapping?

Five days later, a recovery ship bearing coffins arrived at the wreck site. The captain compared his first glimpse of the bodies to ‘a flock of sea gulls resting upon the water.’

Toward the end of Marconi’s life, he dreamed of inventing a device that could capture sounds lost to our hearing, sounds he believed have never died. He dreamed of listening to the Sermon on the Mount; I long to hear my gran’s untold stories, my ancestors’ voices.

I experience beauty as resonance. Dictionaries define that term as a vibration, a quality of richness or variety, and a quality of evoking response. All three alert me to beauty. Whenever a painting or poem literally strikes a chord in my psyche, its beauty stays with me like the sustain of sound over time. Every time “a place within a landscape corresponds to a place within the heart,” (Václav Cílek), it enriches my travels through both my outer and inner life. And when a piece of music or an act of kindness touches me in unexpected ways, my response—whether I feel more grounded or transported—attunes me to the shape beauty can take.

Right now I am enthralled by Mark Helprin’s novel, Paris in the Present Tense. I luxuriate in the story and the language, and I will begin it again as soon as I finish it. As it resonates inside me, I suspect it will inspire some work of my own imagination, because every experience of beauty can transform us. As Helprin writes about music: “If you…surrender to it you’ll allow its deeper powers to run through you and out. It’s all a question of opening the gates.” 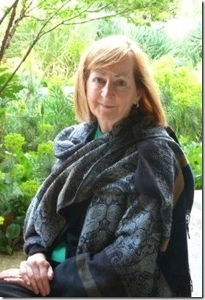