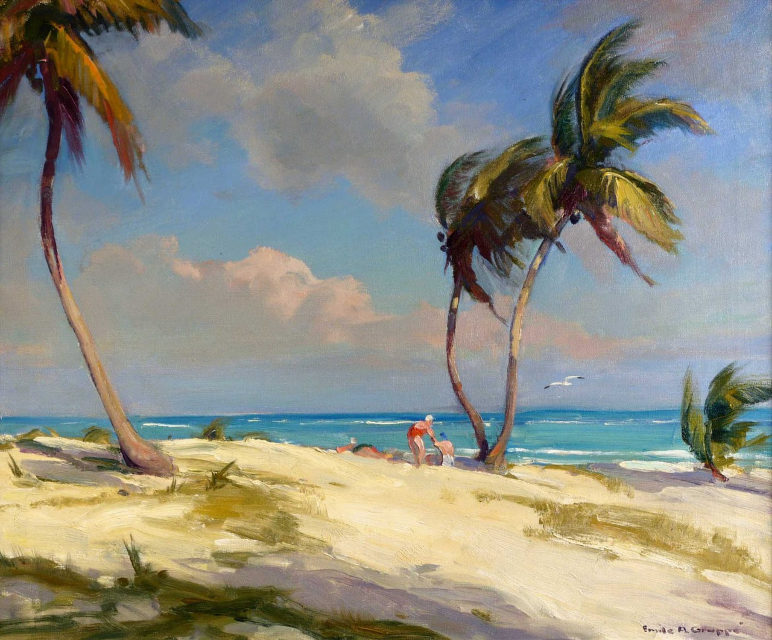 Sometimes A Tall And Slender Palm

Sometimes a tall and slender palm,
can stand so perfectly still
when the wind is down to nothing again
– in warm-quiet fragrance of middle morning.

Nothing seems to move, and you wonder,
has the world stopped? Is everything finally over?
What a thing to be thinking on such a bright-solid day
and the chill of sunrise just wearing off.

But you think it anyway, because, if it were over,
that would be all right – with morning so blue-perfect,
and the sun stuck up there in the sky
keeping everything warm.

Sometimes you almost fail
to catch that faint first flicker,
one spiky palm leaf
catching the early edge
of a new breeze.

This is the way the palm tree tells you
that the world goes on,
that evening will come,
quiet evening, perfectly still,
when the world stops again.

Finally getting to where you’re supposed to be,
or almost there — it has taken the going-through
of another drudging day to get this far.

Now, the end is in sight. — the moon rising, full,
and looking just a little bit like a pie, fresh baked,
and held up for your inspection,

browned to perfection by the earth color
steaming out from everything this day has been down here.
And as the moon climbs farther into the darkening sky,

it sharpens itself into something whiter, something brighter,
like the mantle in a gas lantern, finely tuned,–
round and burning with its own importance.

As you turn the corner and head for where your house is,
you’re not surprised to see your own wife,
glowing like a gypsy, arms up-stretched,

and standing stock still in the middle of the street,
because she has always owned the moon.

Even pigeons bank like angels
and circle frisbee-flingers in the park,
aware of curving flight
their feathered bodies trace,
and the way the late sun
glints on flashes of wing,
as if they fly outside themselves.

Late in the day, and springing
almost only on their toes
— finesse of ballerinas,
the frisbee-flingers cheer each other
only for the beauty of things.

It is this grace they feel,
moving to launch and follow
slow arcs of spinning disks
rising up toward —
and then returning
from that same place
where the pigeons flew.

I Was Never A Lamb

The lamb, born Thursday
sleeps the sunny windy afternoon all the way down,
his chin and cheek propped and nestled
upon his mother’s back
as she lies on the ruffling green hill,
facing away from him
and thinking thoughts of other pastures.

If I were a lamb, that’s where I’d be too.
I’d prop my chin on the broad curve of her wooly back
pretending at first to sleep,
but all the time sensing how still she remained,
just for me, wishing me sleep.

I would imagine her tranquil eyes,
just as if they gazed at me.
I would know from the stillness
how subtle is a mother’s love,
and I would sleep the whole afternoon
down into moonrise.
That is what I would do, if I were a lamb.

But I was never a lamb.

The ocean, always —
not far.
Around the back
down a short lane
that begins a sloping, seaward.

You come to a bluff
with stone steps down,
a pipe railing,
and wild flowers in Spring
that crowd the cliffs.

Some days I hear the sea
pounding the sand,
or the wind roaring in
across the tops of
roused and hissing waves.

Some days only the silence,
and I’m drawn out by sunshine
to investigate the vastness of blue.

Some days I don’t even
think about the sea,
even though I always seem
to feel the tides
inside.

And every night
no matter what,
I sleep in awareness of water.

I actually became aware of beauty back when I was seven years old. I’d get up at dawn every summer morning to go fishing by myself. I’d walk a half mile from home to the water. I’d weave through dangerous traffic across the road into town, and I’d make my way down a poison-ivy path to a thin strip of meager beach.

When the fishing wasn’t good, which was most of the time, I’d prop my rod and reel against a log and wander the beach. I’d pick up occasional stones, beach glass, and pieces of driftwood that caught my attention. I brought them back and gave them to my “other mother” Mary, the young bride of the Navy Aviator who lived down the street. She told me they were beautiful, but I’d known this even before that first time she told me. That was long before I tried to learn to understand or explain the meaning of beauty. Mary displayed the stones and driftwood on her coffee table.

I caught two fish that summer but collected at least two dozen beautiful things for Mary’s coffee table. On days when it was too blustery and the waves were too wild to hope to catch a fish, I’d still go down to the beach, to try and find more stones and driftwood. Every time I wandered that beach, my eye for just the right stone became keener and keener.

Years later, when I started to write poetry, I realized it was for the same reason I’d combed that beach. In my mind, I wanted each poem to bring back something of beauty for Mary’s table. That’s still the way it is for me. And it’s probably the reason a lot of art gets created. There are separate  Mary’s tables  in the minds of many artists.

The truth is I never learned to explain the meaning of beauty. When I try now, I discover I can’t do it. But I realize it isn’t going to stop me from going down to that beach, even on blustery days, to find stones for Mary’s table. And I know that “Mary” is going to keep telling me that at least some of them are beautiful, not because I’m seven years old, but because they are. And she and I are never going to end up talking about what beauty means. 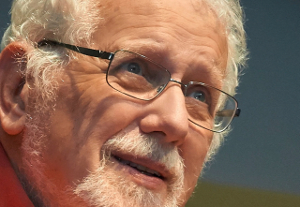 Harry Youtt is a  poet, essayist and short story writer who teaches creative writing classes in fiction, creative-nonfiction, and poetry at the UCLA Extension Writers’ Program. He also serves on the editorial board of the peer-reviewed international Journal of Consciousness, Literature and the Arts. “Narrative” and “accessible” are his favorite literary words, and in a long-ago academic paper, he coined the term that now titles his popular workshop: ‘Plain-speech Resonance Poetry.’ Twitter: HarryYoutt.