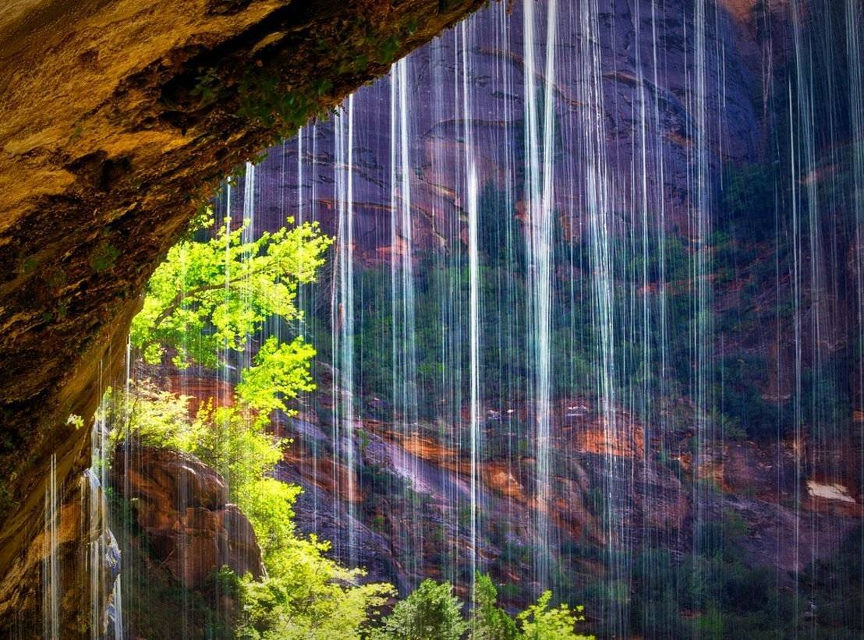 settle in the alcove, camera
aloft beneath the lean of fern & moss,
above a basin for the trickling

echoes from the canyon’s eaves
see fall what water stone will part
with, less the tears at the heart

of things than the end of a thousand
years of gathering, the spring
line where water can & cannot stay,

visible in the strata, shale kayenta,
stone that was the stream’s
gifts, silt & sand

through Navajo sandstone to these flowers
living in abeyance that bow
like the gifts of the king to Amytis.

One bragged she knew him when young,
the King of Oak Grove ranged in
backyard raspberry brambles.

I’d heard he wanders headstones
by the tombs, but I’d never
met the monarch. Mid-run, pace

aligned to heavy metal
drums, my steps cemented
when he rose, unheralded.

in the morning road, buckling
commuters. All our pleasure
to see him then remember

his power, cross the center
lane’s yellow stripe in seconds,
red in his robe, oak shoulders,

bole for a midriff, white throat,
antlers bone branches. All through
with his audience, he leaped

to preserved forest that shades
nobility so removed
only the symbols survive.

When the familiar music begins,
our daughters descend upon the room,
gathering into their entrancing
a five-foot boy who guesses to
dance for them may summon laughter, rain
for his village.
Fireside, women drink
red wine, our host airily tells us
Alessandro was followed at recess
by a “cloud of girls,” oblivious.

He’s mellow, tall, prefers to amble
off with his skateboard & fishing pole
to the lake, his cell phone off. He asks
his father why his friends are inside,
staring at screens on a night like this,
as I step back, batting mosquitoes.

He does not know what his friend has seen:
the meringue-edge, puffed-out aether
that floats through cities, the promising rain.

Indian summer’s found us overdressed,
aspirations dead weight on the way
up, curling round the knolls and ridges
to the unlocked tower, its necklace
of smashed green glass a mere two stories
but high enough to solve the city’s maze.

The hospitals and marquees where I remember,
but available paths surprise, several roads
to the highway, bridges like laces
on the city’s boot, the exits eyelets
to horse farms or the jail by the rotary.
Closed roads and private ways are the visible

ends of expectation, clear to eyes lifted
above the context, the Fells at our back.
The company of birches calm as vernal ponds
my wife will want to keep secret for our
winter skating.  The mind’s after a sufficiency
of moments, each step up Mud Road not spent

avoiding twisted ankles, or at Panther Cave
itching for my phone.  It’s fighting the loss
of insight on the descent, to hold what silence
I have received. How I’m sure I’ll yield
to the diurnal once I return to the argument
of roads, and give the right of way away.

I’m watching the NBA finals tonight, and watching Steph Curry shoot a basketball is beautiful – and how many thousands of hours went into making something look so natural? Beauty is effortless, or looks that way because of the labor that went into it.

As a teacher and a parent, I see Blake was right to say “exuberance is beauty,” every age of a child has its beauty – and so adults – I’m hearing the Byrds in my mind as I type this – and as a person who’s lucky enough to spend some time in the forest or by the ocean every now and then, I’d say beauty is rooted in the ten thousand things, existing as they are.

The process of making beauty is, to me, getting the conscious, ego-clamoring mind out of the way, and letting the experience speak for itself, or becoming the conduit for what generous work the subconscious has done. And then, if need be, to work on it until it’s entirely what “it” wants to be. Merwin talks about poems being finished when he can’t tell that he wrote them. That’s something to aspire to.

I’ve always disliked painter’s signatures and movie credits for that reason – they ruin the illusion.

The effect of beauty is that of recognition – the namaste moment I’ve heard about (I’m too inflexible for yoga!), the light in me sees the light in you –  and then an elevation of thought to the cusp of the spiritual. The last time I saw a dolphin swim, my brain and heart were in my mouth, and I couldn’t say anything, not even applaud, because I was too busy trying to take a picture. I was sure any beauty I had paled in comparison to its, and yet it was my honor to be able to perceive it.  I think the dolphin knew it was beautiful. 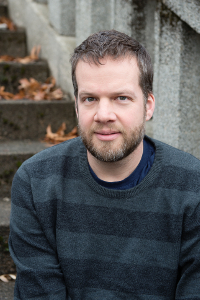 Maximilian Heinegg ‘s poems have appeared in Columbia Poetry Review, The Cortland Review, Tar River Poetry, December Magazine, and Crab Creek, among others. He is a singer-songwriter whose records and adaptations of poetry from the public domain can be heard at maxheinegg.bandcamp.com. He is the co-founder and brewmaster of Medford Brewing Company. By day, he teaches mental self-defense and English Language Arts in the Medford Public Schools.More at: maxheinegg.com.