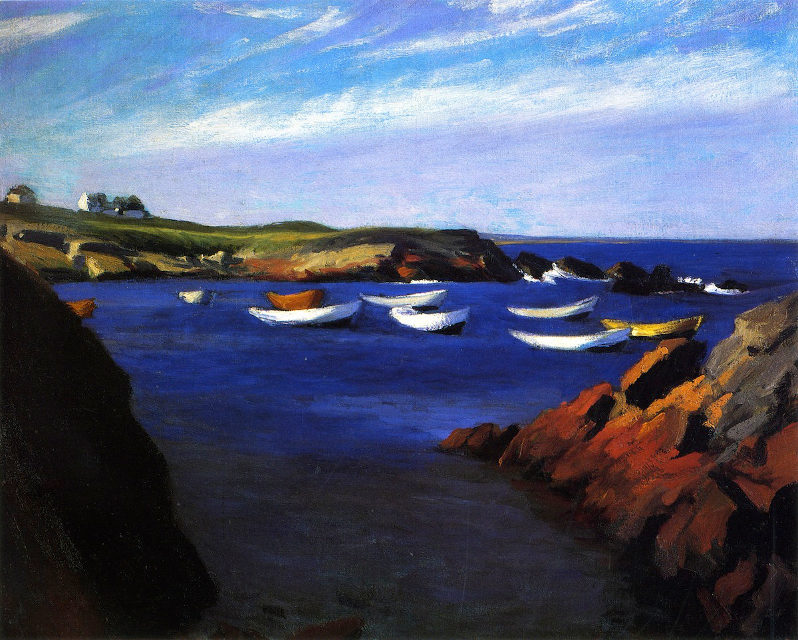 The realtor who rented me the cottage said, “This must be your lucky day.  Cheap for such a good place.”

I kind of feel the same.  I’ve felt lucky in spurts.  Both times I got married I felt lucky.  Even when my first turned quickly to sadness.  I felt lucky getting out, both of us relatively unharmed while still so young.   If you have to get out, it’s best to do it early.

The small white cottage, luckily, came furnished.  Not exactly what I’d choose but nice comfy things like out of a retro movie.  There’s a wood stove, a few antiques placed here and there. I like sitting at the speckled metal kitchen table having a meal or cup of tea.  The narrow mullioned window overlooks a quiet road.  The vinyl chairs are cracking; but the bright tomato-red makes them cheery.  When I shift they squeak like canaries.  According to Ella, the realtor, some man who lives in California owns the cottage.  He hasn’t been back in twenty years.  How can she pin it down so precisely?  A man painted the door the lightest possible shade of pink?  Almost flesh in tone.  Surprising.  While Jack, on the other hand, built us a house of glass.  Everything custom.  Wherever a beam could be spared: glass.  He said it proudly to anyone seeing the house for the first time.  Never mind that I hated living in a fishbowl.

Riffling through an old cherry bookcase I want to know more about the people who occupied this cottage.  Not lived here – these walls hold a lingering sense of people coming and going.  Besides books, the shelves are stuffed full of mementos.  I’m careful how I handle things.  So many postcards and invitations.  An occasional photo that falls out of a book.  These I stare at; searching.  From their frozen-in-time smiles nothing is revealed.  As if what I’m digging through is intensely private and meant to remain that way.  I run my finger over the embossed lettering on invitations.  Once a traditional ivory shade on stiff card stock, they’ve weathered to a light tan.  How full these lives were in comparison with mine.

I can picture them gathering their chairs and towels and books, wandering down the road to bask at the water’s edge.  When the noon siren went off, I see them returning to the cottage for lunch and maybe a nap.  Maybe sex.  Warm tanned skins clinging.  What whispered endearments within these walls may or may not have lasted?

Almost obsessively I continue going through newspaper clippings, nearly crumbling, telling of marriages, births and deaths.  The society pages have photos of formal dances in yacht clubs, horse shows, polo matches.  Some theatre stubs fall in my lap.  Blackened, they smell like old cigar ash.  I hold them to my nose a moment.  I find pamphlets of art openings, concerts, the ballet.  A leather bound volume of Shakespeare sonnets holds an invitation from The White House during the Truman years.  These were rich people.  They really lived.  Using the cottage to slum?  Most rich people spent summers in large houses with wrap-around porches.  They only called them cottages.  This place, within walking distance to the bay, must’ve been used in secret.  A little hide-a-way.  Intriguing.  I try placing everything back the way I found it.   Do not disturb runs through my mind like a reel.  I have disturbed the past; and it has disturbed me.

The sun is nearly gone down.  My knees are starting to ache from kneeling.  I sit back on the wood floor feeling the cold through my jeans.  Strewn around me the remnants of a life not mine.  Sobering.  Standing up, I shake out my stiff legs.

Then I walk to the window staring out at the purple streaked sky.  I’m thinking of buying a couple of long silk nightgowns.  Winter’s coming.  Silk is good for keeping warm.

Mickey is in a huff over his malpractice premium.  “All on account of that phrenic nerve with the old guy.”  He’s scrutinizing the bill.  “People die.  It’s the natural order of things.  I’m only a doctor not God.  I can’t save everyone.”

He waves the envelope in the air threatening to bury it in the pet cemetery behind the animal shelter.

We’ve come here looking for my dog.  The one I want.  A boy who seems underage for this job takes us through dank, cement buildings where dogs with death in their eyes stare out of cages.

“Why not go for a pure bred?”  Mickey is saying.

“I’ll take that under advisement, Doctor.”

I’m starting to dislike Mickey.  This is another shining example.  Plus it’s a bloody miracle we can even purchase malpractice insurance –  what with all the hospital borne infections. Why the staff can’t suit up properly and use the Purell containers just flips me out when I focus.  Everything flips me out these days.  My wife left during the summer and now it’s late fall.

“How about that one?”  Mickey’s pointing at a German Shepherd mix.  The dog looks gaunt and miserable.  Listless.  It stares and I stare back.  I kneel in front of its cage.  “Is this one a male?  Neutered?”  I ask the boy.

Somebody named this poor wretch Tonto.  A name like that, how would you stand a chance?  “Tonto,”  I say.  The dog’s ears perk up.  “Is he friendly?  House trained?”

“Tonto is a good dog.  Do you want me to open the door so you can pet him?”

“Could be risky.”  Mickey is zipping his jacket up to the neck.  “Suppose Paula shows up, like all of a sudden, and she doesn’t want a dog.  Then what?  You’re making your life more complicated, Jack.”

He springs a latch, and Tonto stands on shaky legs.  “Has this dog been abused?”

“Most of them.  They had bad owners who beat them or pitched them into the woods.  Mister, you don’t end up here from the good lifestyle.”

Quickly the boy steps back.  Thinner than I first realized.  He could be an abuse case, too.    “I didn’t mean nothin’ by it.  Tonto it’s OK,”  he tells the dog.

I continue to kneel and wait.  Eventually the dog makes his way out of the cage though not too near us.  “You can count his ribs,” I say.  “Poor beast has been near starved to death.”

I stand up slowly.  “Yeah.  Leash him up and we’ll take him to the car.”  I reach into my pocket and pull out a check, writing five hundred endorsed over to the shelter.  When I hand it to the boy he whistles. I pull a fifty from my cash wad.  “You buy something you want,”  I tell him.

“Is this real money?”

I shake my head.  The boy leashes the dog to something cloth and cheap looking.  “You’ll be happy now, Tonto,” he says.

“You knew in advance,” Mickey is saying. “You knew you were going home with some mutt.  What a soft touch you are, Jack.  Sucker bait.”

“I only knew one thing.  I wasn’t going home alone this time.”

Getting Tonto into the car is another deal altogether.  Fearful, he backs off each time I pat the seat.  “Come on, Tonto, jump right up there.”

Mickey and the boy add their two cents to the mix.  The dog seems stuck to the cold ground.  He isn’t budging.

“We need some meat,”  Mickey tells the boy.  “Go inside and bring us some meat.”  The boy nods and disappears around a building.

“Well, Mickey, I’m impressed.  By your humanity as well as your knowledge of dogs and feeding habits.”  I look at the cowed animal.  “Fella, wouldn’t you like to come live with me?”  If ever a creature could be fearful, starving, hopeful, resistant and more – this is what we have here.

“You’ll get very good steak bones if you go and live with Dr. Jack,” Mickey tells him.

“Son, you are not to worry.”  I take the package, my eyes tight on the dog.  At the smell of food it licks its chops but still doesn’t move.  I open the paper fully, placing it on the ground, stepping back as the dog wobbles toward it.

“This is pathetic,”  Mickey’s saying.

The dog devours the meat in under two seconds.  Looking up at me for more. “More meat at home.”  I call out to him in a steady voice. “Tonto, c’mon.  Let’s go home.”

He waits.  He’s waiting me out.  Then he takes a few steps and licks my hand.

“Time to lift him in,”  I say.  The three of us managing to get him onto the back seat.  He sniffs cautiously then lies down.

The boy reaches in and pats the dog’s head.  “Bye, Tonto.”

Beauty is one of those intangibles that seems to shape shift from person to person and moment to moment.  Some find beauty in perfection, while for me, beauty can present as a rotted tree trunk, a fence missing slats in exchange for honeysuckle, an old house gone to wrack and ruin.  I look into things that might have once been considered beautiful, seeing them with a fresh perspective, at the possibilities, as they travel through what is known as time. 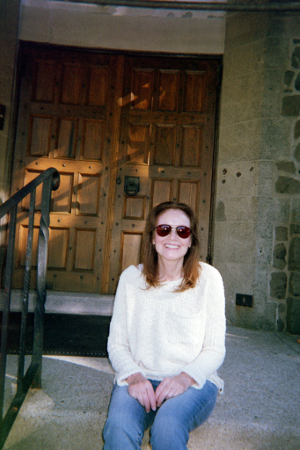 Susan Tepper has been writing for twenty years. Prior to this, she worked as an actress, singer, flight attendant, TV Producer, marketing manager, interior decorator, rescue worker and more. Tepper is the author of six published books of fiction and poetry.  Currently, her seventh book, a novel, is under consideration. Tepper was 7th place winner in the Zoetrope contest for the Novel, 2006, and Second Place Winner for story/South Million Writers Award in 2014. Additionally she’s received nine Pushcart Nominations, and a Pulitzer Prize Nomination for her epistolary novel What May Have Been.  FIZZ, her reading series at KGB Bar, NYC, is sporadically ongoing these past eight years.  More at: susantepper.com.