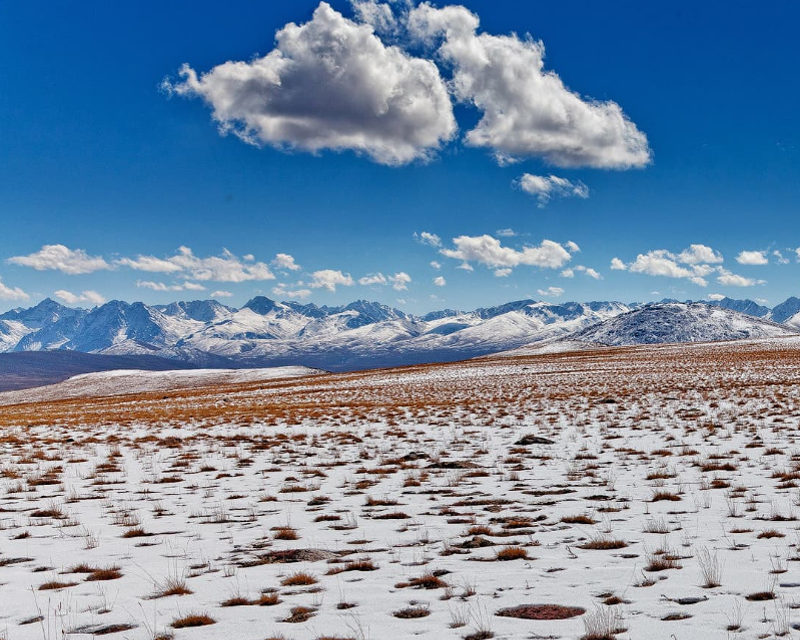 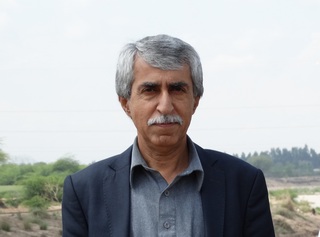 Shepherd on the Plains of Damaan

Two sweltering hot days of June, close and oppressive. The glare of the noon sun discomforting and unbearable, temperatures in the extreme upper forties (~118 F). One could hardly look at the sky with squinted eyes. The hot wind buffeted one with some ferocity, and after a shave in the morning, one’s cheeks burned while cruising through it. 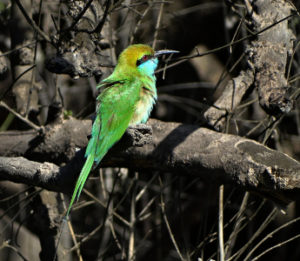 During such days I wondered at the resilience, hardiness and tolerance of all the shepherds of Damaan, where the sun was relentless in the hot sky, and the vast dusty and fissured plains vibrated and quivered, and mirages were elusive as ever. The distant acacias seemed to melt into the turbulent air and the drying grasses, almost singed, appeared to lose their greenness. They looked faded and out of place, like in Steinbeck: ” the uncertain air that magnified some things and blotted out others hung over the whole … so that all sights were unreal and vision could not be trusted.”

The Athel pines soughed ominously when the wind picked up. The arid plains stretched far into the distance to the heady river Indus in the hazy east, and parched, rugged, stony at places, they rolled up to the mighty Sulaiman Range to the west. Had these two natural barriers not been there, the wind would have swept the entire landscape. 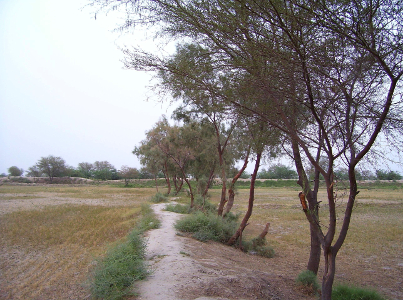 Water was rare on these plains. Men, birds and beasts looked for it and it was difficult to find. The harvests – whatever there were – had long been done. Stubble fields lay thirsty, waiting for much wanted rains which seldom fell. And the water from the distant mountains, shimmering in the radiated heat, rarely reached these thirsty fields. While standing there, somewhere alone at noon, one seemed to be standing on the moon or Mars.

A Damaani shepherd started off early from his small hamlet on the blistering plains with his flock of goats and sheep and his pet dog. They looked for meager vegetation, for there were no pastures on Damaan, except during rainy season when the land gave the look of a green pasture. 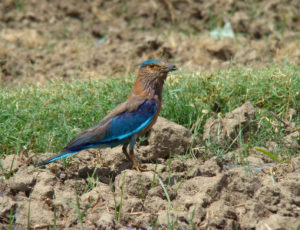 The shepherd had his earthen water container covered in a sewn piece of gunny sack on one shoulder, and his soiled muslin shoulder cloth on the other. A turban on his head and a crooked stick in one hand, he accompanied his flock with his dog. A medley of tinkling bells of various shapes and sizes, irregular and incongruous melody of clattering hooves, and a trail of dust behind them, this is how the morning started for all of them.

Soon the sun started blazing and, on known paths, the flock moved in an uneven unison, with a sharp pungent odour of the flock rich in the air. Far away from their hamlet, in a mix of barely cultivated and barren lands, there was little for grazing, and it had to be done in the neutral land owned by none. 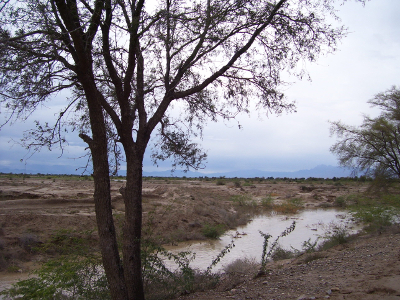 The flock grazed in the huge deserted fields where some rain water had stood once for some days, and the land, having retained the moisture, had allowed various grasses to grow. Once the flock moved in, the grasshoppers hopped here and there, and a black drongo began to catch its prey. One wondered then that these inhospitable plains were not devoid of life. Ample wildlife was there: nature had its sway on this land, too.

The Indian Rollers flew off from either the berries or the Athel pines, and came to steal their share when the flock disturbed the insects while grazing. Common and bank mynas were there, too. Perched on the backs of goats and sheep, the black drongo looked for the insects to stir. 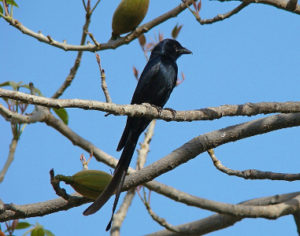 The shepherd always stood at some strategic place, his entire flock in clear view, for he could not afford to lose any of his goats and sheep on these enormous plains. Wolves and jackals were always on the prowl, and finding a lost goat alive was a rarity. The flock grazed, almost rooting out grasses like wild boars, but it was no surprise they found something to eat on Damaan. This was the miracle of the land.

So the flock drifted from one place to another in a radius of ten to fifteen miles on these rolling plains of sparse grass vegetation, interspersed with acacias, berries, Athel pines, bare capper bushes, and Jund trees, while the fiery sun rose higher and the heat became intense. At noon it became difficult to stand in the sun, so the flock headed to a sprawling old acacia, or an Athel pine of enormous size, where sometimes two to three flocks of adjoining villages gathered together. 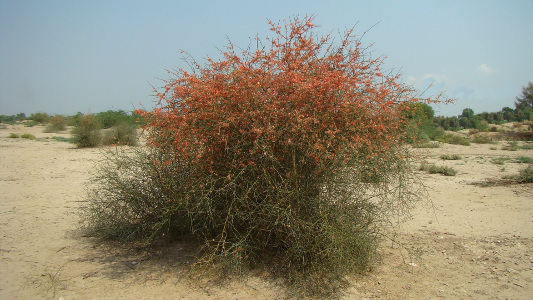 Karira shrub on the plains of Damaan. (Photo by Syed Abid Hussain)

Here the goats and sheep chewed cud while dozing and shaking away flies, and the shepherd with his dog slept for a while after taking his lunch, tied in a piece of cloth, and washing it down with water from his clay container. His dog had half a bread, too, and he lay close by him watching the flock warily with cocked ears and an eye open, but he rested for a little while.

Just when the shepherd rested with the flock, the huge umbrella of the acacia became alive with the calls of various birds and rodents who also took shelter there. It was when one roamed with the shepherds in such places that one truly came to understand the spirit of the place. In the early afternoon the shepherd milked some goats and made tea for himself in a pot which he often either carried with him, or which he left in the bushes close to the tree where the flock rested at noon. 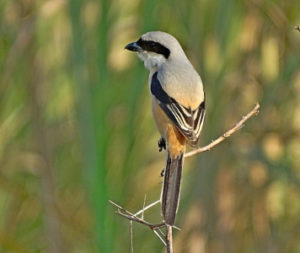 After taking tea, he judged the angle of the sun and his distance from his small hamlet. He took his flock out in the fire breathing monster of the sun again, but he knew it was tilting to the west and was on the decline. With each passing hour the scorching heat would keep diminishing by degrees, and it would become more pleasant in the late, late afternoon. With a trail of dust following them, the flock moved, sometimes getting scattered, and grazed in a wider area, with the dog alert to their wandering off far. 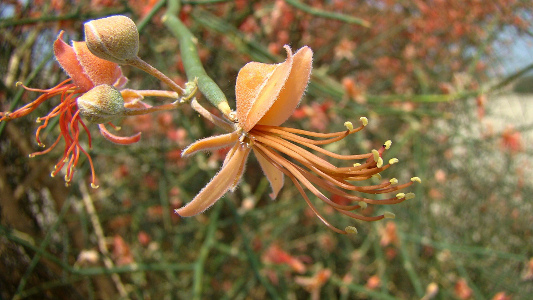 Karira flowers on the plains of Damaan. (Photo by Syed Abid Hussain)

With whistles and verbal directions of hee and haa, the flock came together again and forged ahead. Mostly it was a disciplined assembly of beasts, but the shepherd did become abusive when a goat or sheep went stray, disobeying orders or breaking the ranks. Close to the village there were some drinking spots where the flock quenched its thirst.

By then the sun had lowered to the Sulaiman Mountains, losing most of its ferocity in the process. The huge plains rolling away to the Indus cooled down a bit. And just when the sun set to the west and sank with all its brilliance behind the jagged peaks, the goats and sheep went to their respective homes to be milked and fed lavishly by their owners.

The shepherd with his dog went to his own little shack somewhere, and after taking his supper, rested for the night under the open, star-studded skies. The evening grays had long since melted into the darkness. And Damaan went dark. Jackals came out to rule it for the night. In the outskirts of the village, their howls rose on the still air and could be heard far and wide. The village dogs bristled and barked.

Professor Syed Abid Hussain currently works as the principal of one of the most prestigious colleges in his hometown Dera Ismail Khan. His debut collection of poetry, The Far Bank, was published by Aldrich Press/Kelsay Books in late 2013. He is an amateur photographer and a naturalist.  More at naturaldamaan.webs.com.