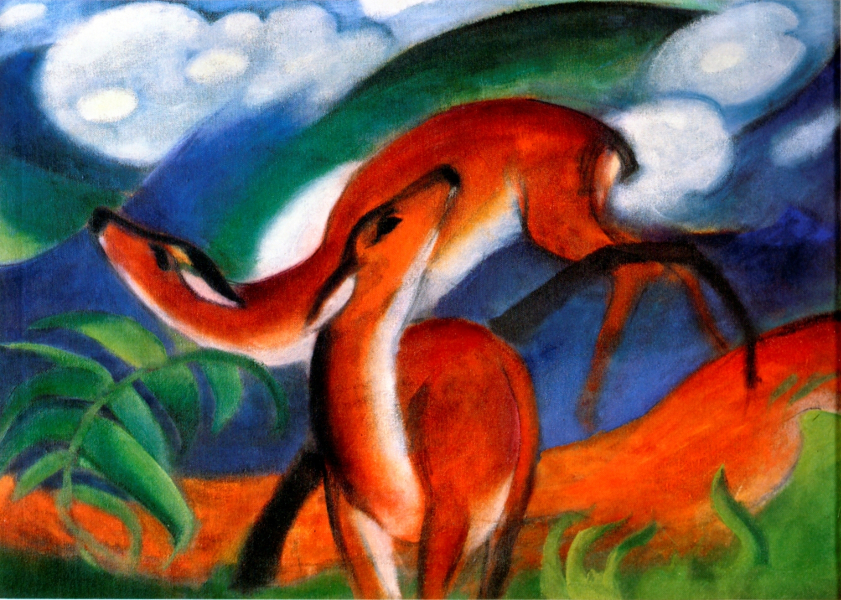 Three teen deer have begun of late
to make daily dusk-time stops out back,
their flat flanks and thick, angled necks
depicting stumps and trunks that then
move and materialize and re-blend
as their busy muzzles forage-and-
freeze them across the far lawn. How
ever inventive their camouflage. Of course,
once I look up, so do they, slightly
white faces and twice-twitching ears
alert to any budge.  And if I stand,
even gradually as a yogi, they hop
and spin and crash backward into
slits that open in the brush and oaks
that just as quickly close behind them.
I’m showing you nothing you don’t
know, and know you also know that
doesn’t matter, that you, too, would stop,
lift your face, and love them every time.

If god were gentle

Let us believe in a strong god,
who makes the oceans
roar and the wind crack about our ears…
For we are envious of this, and to
believe in a gentle god,
therefore, does not become us.
—John Haines, “Pictures and Parables, IV”

But if God were gentle,
here’s what would become us:
bluest sky, the sun-warmed porch, both
beholding a glorious afternoon;
a couple of hummers buzzing
one another and synthetic flowers strung
from the eaves of drowsy cottages
in their staggered, settled rows;
patches of heat, patches of swifter cool,
gulls and butterflies riding
the easy overlap; the oblivious bees
busiest among the wine-red geraniums;
the breeze-borne pine;
the near swish along a length of shore.
This perfect day—
and then a doze, a little more
of sailing the muddling resubmergence
into all of a life that’s come before—
a convergence too complex
to register, though no less corporeal
for its mysteries, for its streams,
for its coursing through the
unwished, the essential, sorrows.

The coffee’s made for, what,
the thirty-five-hundredth time?
Give or take.  For a decade,
in four months.  Love Buzz!
We joke, but that nails it,
and not just the coffee.  Lord,
the buzz she brews in me.
Nights, too much streamed TV,
then the old novel I’m reading
dips for the fifth time.  We say
“Click” when we spoon, the
ten-year ritual still a perfect fit.

Song of the Sirens of Life

The domestic smile of snow,
the anonymous kindness of white,
the imagination of the mouth,

the grains of ebbing desire,
those inaudible explosions,
those nominal pleasures,

the churches of the vapor—
my tired mother finally
flew; what she had chosen

mimicked a parachute. Not
a soul had bewitched her,
but signaled safety, so sure.

Beauty is a quality of anything, really, that provokes in us, for whatever reason, an awestruck double-take, the prolonged or re-look, re-read, re-listen, re-touch, re-think. The “live” one ends, of course—the sunset, the concert, the intimate moment—and we often strive and contrive to experience another like it. But the “alive” one remains—the painting, the recording, the poem—to re-offer its beauty, even if also its ugliness. 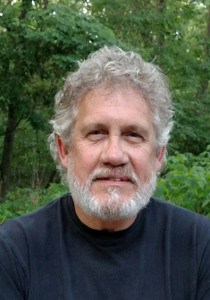 D. R. James’s poetry collections are Since Everything Is All I’ve Got (March Street) and five chapbooks, most recently Why War and Split-Level (Finishing Line). Poems and prose have appeared in various journals and anthologies, including Ritual to Read Together: Poems in Conversation with William Stafford (Woodley) and Poetry in Michigan / Michigan in Poetry (New Issues). His second full-length collection, If god were gentle, will appear in early 2018 from Dos Madres Press. James lives in Saugatuck, Michigan, and has been teaching writing, literature, and peace-making at Hope College for 33 years.