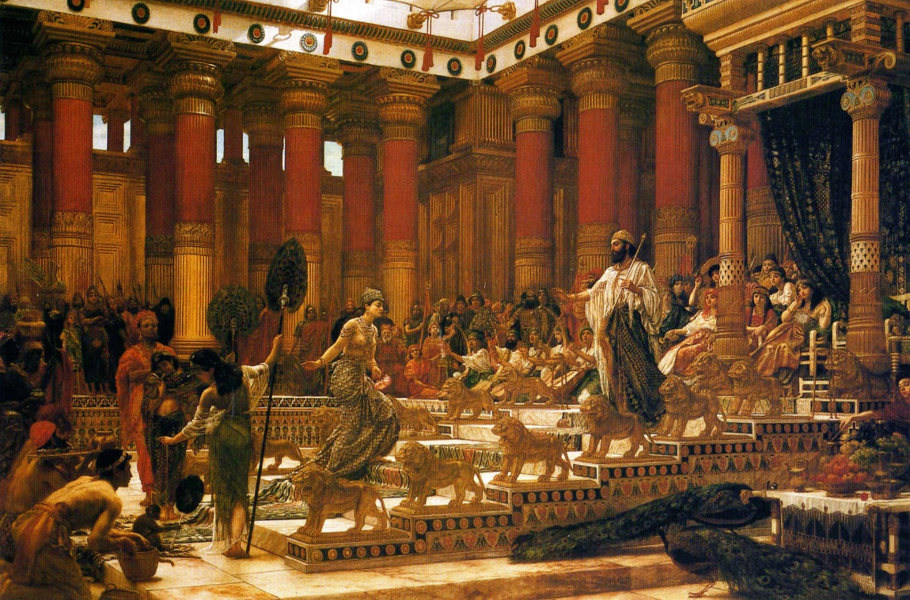 Their Pouring Out and In

In the skin-smooth cove, he
is singing her welcome.  Sailors row towards
the tawny shore, where
Solomon, harp on his youth-tight loins,
joins his song to the sea.

Balkis steps from
the licking foam to the bread-warm sand.
No urgency
expends the grace of love’s completion.
And infinite, ecstatic

peace attends their
estuarial pouring out and
flowing in…  in
silence over this All-Is-Well:
beyond understanding or doubt.

When she awoke in a peace that was physical,
limbs languid, twisted with his, she
watched, as she was lying there, through
the circle of light by which their lair,
top unclosed, achieved the sky, a
hoopoe whirring overhead.
It blessed the day and their nuptial bed, then
went, draping a sigh-sweet cry
over the drowsy, dawn-kissed tent.

Where is she?  It’s Solomon’s Temple she enters.
There, a celestial swell – is it music? – at
first, confusing, lifts her feet.
Ascending the stairs where angels meet in
radiant arch, their wings a wall, when
she laughs for vertiginous joy, then all these
blazing cherubim descend, not
with hazard’s burst, but unearthly calm.
Her mind understands:  “We are mutual promise.”
They take her dream-long hair and wind it
in-and-out, braiding the strands,
singing, in game, in dance, in trance.

“Who shall she be whose hair we braid?
Many and changing, for so she is made.
Who shall be her father, then?
None, but none is as good as ten.
How shall we choose her mother, and whom?
Her mother dwells in her living womb.
Then who shall be her destined spouse?
Solomon’s being is filling her house.
Like their souls, intermingling in these tresses we twine,
So also, their memories are linked for all time.”

The Great Serpent, The Divider

Days, nights, hours…  Time, the great serpent,
encircled, constricted, swallowed.  The lovers followed the
way their precious stock of moments together
dwindled with a kind of awestruck shock – and
wished parting were over, like destructive weather.
{…}

Because the time was near, the
jangled sovereigns retuned their
closeness, each probing the salt-sharp
sores of severing altered
lives alone, each gnawing their
awful – dear – wounds.

But the nights were not wasted.
They alternated
between voracious
haste and hellaciously
stalling bouts,
culminating in
simultaneous
shouts.

On The List of the Dead
“Auf der Totenliste”
Isolde Kurz, Neue Gedichte (1905)

That list where one mechanically has written
One name, and then another, indifferently —
The last one’s letters still damp — but here, let’s see,
What was his name?   Oh, the heart is bitten!

You ghosts, who all awaited his signal’s clearness,
And Graces, pulled from your seat in the world above,
Where are you?  —  These places, that they so much love
Are still steeped with the sense of your presence and nearness.

And should Heaven and Earth not have to shift their foundation,
Should time not be forced to halt its running pace
If the heart is to absorb such information?

Pointless, the public triumphs in discordance.
The days roll by, and what has taken place?
One more name is on the list of war-dead

To every story,
bliss or torment,
Beauty cries, “Brief!”
but brings providence’ salve –
even love in grief –
offers sacred relief. 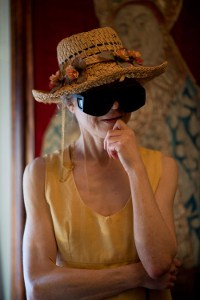 Becca Menon is an American writer whose largely narrative poetic works, based in myth, fairy tale, folklore and Scripture have been hailed internationally in countries such as Iran, India, Iraq, Canada and the United Kingdom as well as the United States. Some shorter works, essays and translations appear in print and online in publications that include Parnassus, Mezzo Cammin, Kritya, Antiphon and others. She is associate editor of Phoenix Rising, a multilingual sonnet anthology. More at: BeccaBooks.com.

Isolde Kurz  (1853-1944) was a popular, prolific and erudite German writer renowned for her fine style in virtually all genres.