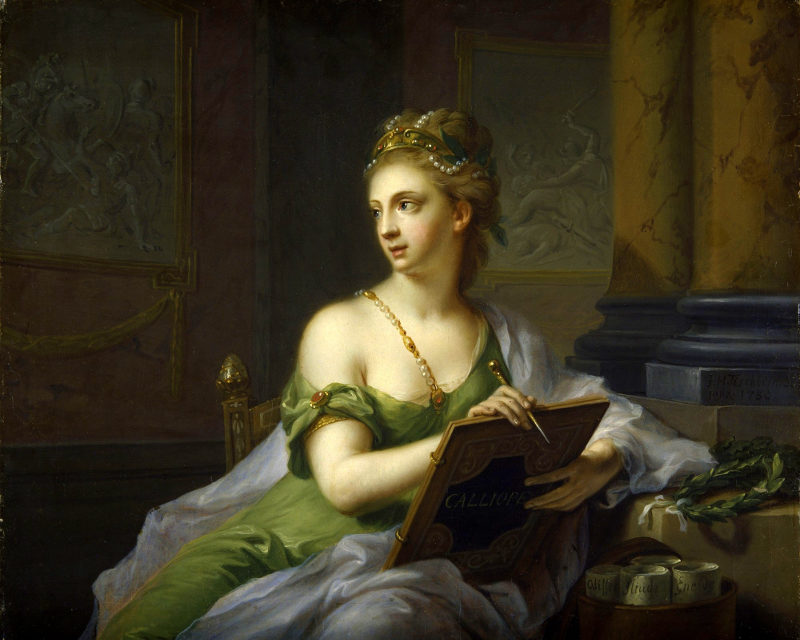 Miss Violet Harbuckle arrived at the Moorehead Employment Agency precisely five minutes before her appointment, which was scheduled for ten o’clock. At least she assumed she had an appointment. The advertisement, which she withdrew from her reticule to check the address, was poorly written and incredibly vague.

“Wanted: A muse,” it read. “Apply at the Moorehead Employment Agency, 18 Drear Street, between the hours of nine and three on Thursday the fifth. Generous compensation if taken on.”

Bronze numbers screwed into the left post of the door in front of her identified this as number eighteen, Drear Street. Violet returned the advertisement to her reticule and tapped the small knocker twice before she could lose her nerve. She knew muses were sources of inspiration and though there was nothing extraordinary in her personality or appearance, she could think of no reason why she should not make an apt muse.

“Good morning, miss,” said a red-haired man who opened the door. “Here about the muse job, I presume?”

He spoke so quickly and loudly that the only answer Violet could think to give him was a startled nod.

“If you’ll follow me, then, miss.” He ushered her into a narrow hallway and trod on the ruffled hem of her skirt as he stepped around her to show her the way. They walked down the hallway, which was flanked with doors of frosted glass. He led her up a rickety staircase. They climbed two floors and emerged onto a landing on which two wooden chairs had been placed. The redheaded man gestured for her to sit down.

“Please take your rest for a moment, ma’am,” he said, then vanished behind the door to her left. Violet did not sit down, as being still when nervous only agitated her further. She stood, wringing the worn leather handle of her reticule between her hands. Laughter and cigar smoke drifted down from a door in the middle of the hallway. From the scuffling sounds above her, either the men up there were having a brawl or a particularly grueling dance lesson. It seems a marvel that there is any employment to be found here at all, Violet thought, eyeing the dusty floors with distaste. The redheaded man reemerged.

She stepped past him and found herself in an extremely spartan office. The man behind the desk looked up from the newspaper he was perusing. He smiled. He was on his feet and had his hand in hers before she could blink.

“Good morning, my dear. My name is Adam Aldridge and I am the artist who placed the advertisement. Now be still a moment,” he ordered while he retrieved a small sketchbook from the desk. He pulled a graphite stick from his coat pocket and began drawing. While he took her likeness, she took his.

He was a plump man but not overtly so. His bulbous cheeks supported his tremendously round forehead. His nose was straight, if a little too big for the rest of his face. His miniscule brown eyes were lost in the midst of such strong features. His clothing befit someone of the upper middle class. He must be a well-established artist, though I’ve never heard of him Violet thought, fighting the urge to scratch her ear.

“You’ll do quite nicely, my dear,” Mr. Aldridge said, closing his sketchbook. “Your features are a bit uneven. Your nose, for example, is too pointed. But your eyes and neck more than make up for that flaw. And your hair! When I’m finished with you, poetry will be written about your hair for centuries!”

He opened the door and led the way back down the stairs. They passed by the redheaded man as they exited the employment agency. The man stood on the building’s stoop, smoking a cigarette.

“Send them all away hereafter, Phil. I have found my muse!”

“Right you are, sir,” the redheaded man said and raised a hand in farewell. Mr. Aldridge took Violet’s hand, looped it through his arm, and they set off at a quick pace, heading further into the heart of town. Violet kept her head down, wondering if her bewilderment showed. The advertisement was for a muse, not a model. Though they are one and the same, I suspect. She thought of some of the naughtier works gracing gallery walls and grimaced. I’m thirty eight years old and I refuse to be drawn without dignity.

With such a resolution made, she straightened her back. Mr. Aldridge had taken no notice of her. His gaze wandered as they walked, examining everything with acute fascination. At last they stopped outside a white brick house replete with high, spotless windows.

“The first two floors are home, the third is my studio,” he explained as they climbed the stairs to the front door. He produced a key from his pocket and unlocked the door. He took her by the hand and yanked her directly to the stairs and up three floors to his studio. When he closed the door behind them, she wrenched her hand out of his with a huff.

“There’s no need for that, my dear,” Mr. Aldridge said, his raised eyebrows causing a multitude of wrinkles to blossom across his forehead.

Violet opened her mouth to establish her boundaries but was silenced by his frank command of “Take off your clothes.”

He arranged a chaise lounge, the room’s only comfortable-looking piece of furniture, in front of an easel with a canvas at the ready. When he saw the outrage on her face, he chuckled.

“Relax, my head. I should have phrased my request more clearly: will you please remove your jacket, shirtwaist, and skirt? This will be a chaste painting, I assure you. You are my muse, not my lover, however tempting that role might be. My housekeeper shall be up shortly to ensure decorum is maintained.”

Though Violet’s cheeks still burned, her hands found their way to her jacket buttons. A moment later, Mr. Aldridge’s ancient housekeeper, whom he identified as Mrs. Stapes, shuffled in and helped her remove her things. Though Mr. Aldridge’s attention was on preparing his brushes and paints and not on her, Violet could not stop blushing. It was the first time she had disrobed in the presence of a man.

“Sit on the chaise, my dear.” He ordered without a glance. She did so, her corset laced so tightly that she could do nothing but sit ramrod straight. An ache settled into her belly and no matter how she tried to adjust her posture, the pain persisted. He must have heard her squirming because he finally looked up and smiled.

“You’re beautiful, my dear, just beautiful. There is still something wanting, though.” He bustled out from behind his canvas, approached, and took out the three combs that bound Violet’s chestnut hair in place. He fluffed it out, placing the locks with mathematical precision. He stepped back with a satisfied grunt.

“I’ll just hand these over to Mrs. Stapes for safekeeping,” he said. He gave her combs to the old lady, who sat on a stool by the door.

“Now look forward and do not move, my dear.”

Violet kept her eyes trained on the back of the canvas, suddenly filled with the desire to run about though she had just been told to keep still. Mr. Aldridge was silent for the better part of an hour as he sketched and sketched. At last he stepped back to consider his work.

“Ah, my dear, you will be famous because of the work of my hands. Your name will be remembered right along with those of the greatest women of all ages. Even, Helen, Lucretia, Elizabeth, your name will rise above them all. And I will be lauded as the artist who captured woman in her totality.”

He began sketching again. Violet blinked and straightened up. The persistent pain became too much. She leaned forward, gasping.

“Come, come, my dear, chin up! I have much still to do and I cannot do it if I don’t have my lovely muse in the correct pose.”

“Please,” she breathed, wanting to get out of his sight before that all too-familiar ache revealed itself for what it was.

“No, no, my dear, you must be seated!” Mr. Aldridge barked at her. “I will withdraw my compensation if you do not resume your seat this instant!”

“Listen to me!” Violet shouted. But it was too late. A telling red stain spread down the pristine whiteness of her underskirt. Mr. Aldridge eyed the stain in horror and sunk to the floor in a swoon. Enraged, embarrassed, and feeling like the world’s biggest fool, Violet quickly pulled on her clothes and dashed out of the house, trailing blood in her wake.

She never saw Adam Aldridge again, though she heard quite a lot of gossip about him when a new painting of his was unveiled three months later. She ordered herself not to go and see it but she did. Her heels clicked on the marble floor of the Homerian Art Gallery as she strode toward the wall on which it was hung. She gazed at it for half a minute before fleeing in disgust.

There she was, more beautiful than she could ever have hoped to have been, a perfect red rose blooming out of her where the stain had been. She never went to that gallery again and lived a peaceful life, completely unaware that, years later, though feisty teenagers giggled at her and art critics were baffled by her, she was remembered as a masterpiece of an otherwise less than noteworthy artist.

Beauty is a concept that has had a myriad of definitions throughout the centuries. Most of these definitions have been contradictory. Beauty has been termed as something that transcends humanity and leads us to God or whatever higher power there may be while also being the motivation behind corseting women’s waists. Beauty is the reason why people have created some of the most glorious things and is the reason why magazines are crowded with advertisements of products that will allow people to be beautiful as long as they use this ageless cream or this weight loss product.

From all these contradictory statements about beauty, there are four facts about beauty and humanity we can deduce. The first is that beauty exists. If it didn’t, we wouldn’t be so preoccupied with it, right? The second is that we are able to comprehend it, to a certain extent. We are able to be overcome by a wonderful story and be stunned by a piece of music. Even though we can’t comprehend all the beauty in all things every single day, the fact that we can see it and understand it is utterly incredible. The third fact we can learn from humanity’s history with beauty is that it is desirable. If it weren’t, we wouldn’t pursue it to whatever extent we decide to during different stages of our lives. The fourth and most important thing we can learn about beauty is that humanity has the power to create beauty, both through using the beauty that is already here and through using our own abilities. Humanity’s rocky relationship with beauty has proven what Sir Francis Bacon said, “There is no excellent beauty that hath not some strangeness in the proportion.” But regardless of how many definitions of beauty there are, it is the four truths about beauty and humanity that I think truly matter. Human beings are unique enough to be able to encounter beauty, understand it, desire it, and create it. If that’s not beautiful, then I don’t know what is. 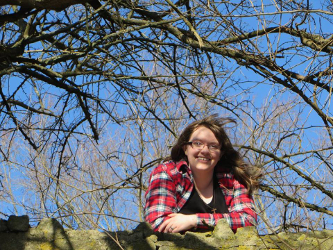 Elizabeth Hoyle was born and raised in Beckley, West Virginia. She is a recent graduate from Franciscan University of Steubenville. Her fiction has been featured in DoveTales: An International Journal of the Arts, Origami Journal, and The Wayfarer. More at entwinedinpages.wordpress.com.