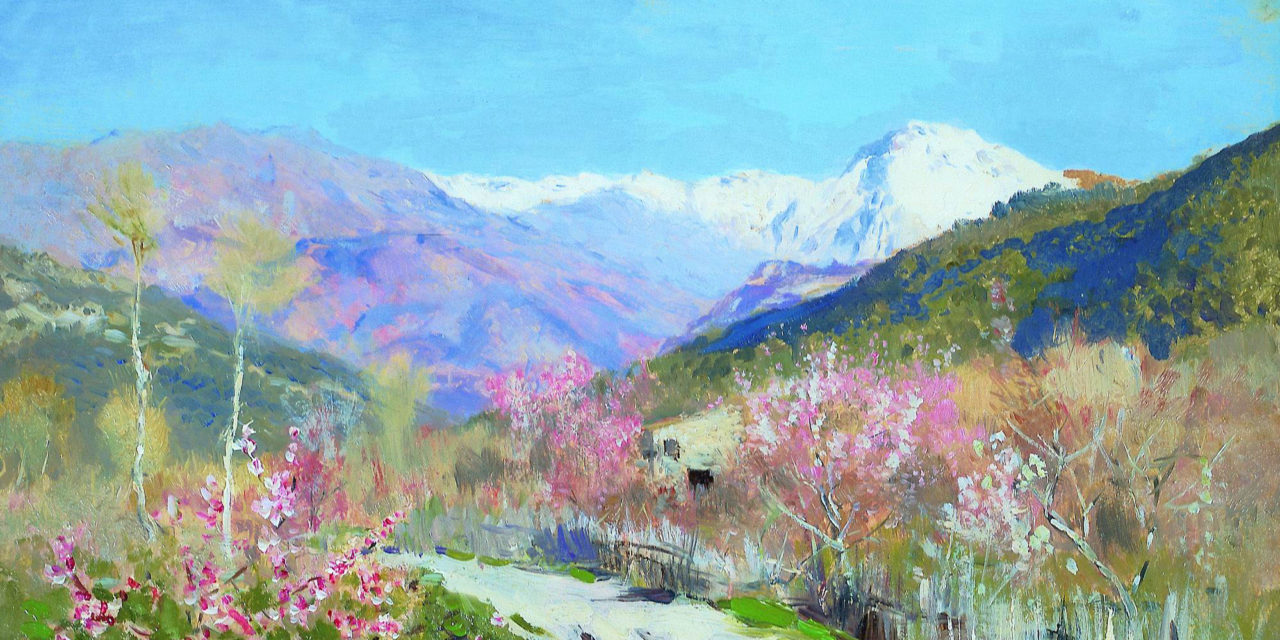 In the year of our Lord’s rising this April first

Easter and Fool’s day. Aren’t they the same?
Well yes, today anyway. And it’s spring,
cherry blossoms full out, blowing like snow,
scatterings of snow, for it has been cold
and the sky is castover, the air not clear,
trees hiving with bees humming one sustainable note,
electric tremblings,  hundreds of tiny fluorescent bulbs.
Light! Light! The sun has risen but is dimmed.

The end of March, last night, and a full moon to rise,
to watch rising, a little late because there’s a low blue ridge,
scratchings of slender trees, branches tight as mesh
through which there begins a glow. Could be porchlight,
could be lamp in Martha’s cabin. Her fingers have rolled
the switch. Is it the moon? One thinks no, then begins
to change her mind.  It grows, slowly it grows.
Maybe a fire. But it rises, bright flares in spaces
between branches. Something round, we can see now.
Something big about to happen. Pale red-orange yolk.
We are on the cusp of light and dark is coming.

We have walked down the road and stand waiting
for the moon. There is chatter, and to talk
one turns her back on the east. There’s an argument
about where east is. One’s sure of north. If that is east,
then where is Venus west? There. But is it a plane?
moving, or not?  It goes on like “Who’s on First?”
Why does the moon as it breaks the horizon
appear larger than in minutes when it rides the sky
like Godiva on her horse, naked but unashamed,
steady and smooth in her progress, sure of her mission
to protect the poor from a husband who wants money.
We need an astrophysicist to explain, an astrophysicist
also a sculptor who does installations in a field like this.
Fields of force and gravitation. Axes. Negative ions.
How yellow light becomes, smaller and higher,
white stone cold. Moon’s full face, brows and nose,
that Mona Lisa mouth which may or may not be smiling.
How one sees it, we agree, depends on who is looking.
Moon ascendant now, sky dark enough for stars.
We find Orion, his belt and sword. And Scorpio.
It’s not the moon that’s moving. We are.

The Creation of Eve
after the fresco by Bartolo di Fredi (1330-1410), Chiesa della Collegiata, San Gimignano

Only the humans are naked in the forest,
animals stroked with fur, angels feathered
and smoothed out on painted wood.
The fruit on the trees is ripe but not fallen,
the apples round, red, not yet worm-eaten.
Clusters of grapes are triangular, globular,
pendulous.  The green force that is God
is fecund in every detail: the fig tree,
the palm tree, the zinnias. God himself
has shown up in opulent robes,
his halo a cracked glaze of gold leaf.
One hand is raised as a sign of blessing,
the other pulls Eve from the side of Adam.
What He’s doing is nothing special.

She’s easy, a sleight of hand. She has pulled
her head erect to look into the Face of God
and begins to float beyond Him, beyond Adam,
who is sleeping, his head softly on a rock,
his long back limp on a slope of green grass.
His sex sleeps too, a boy’s whistle laid
on a shelf of flesh, uncorrupted, hairless.
His dreams are cartoons in black and white.
Eve brings to the garden all Beauty
and Passion, which is desire for the Beautiful,
every intensity tightly coiled and uncoiling,
every appetite for concupiscent joy.
Only the angels hiding behind the skirts
of God are watching, like goblins garish

in Orange   in Awe?  in Horror?
that she is taking over the painting,
its central effulgence.  She is, in brief,
the first creature of the world to perceive,
and as she sees, the world opens and becomes:
colors, textures, solid objects, even
the tiniest eyes of insects, their rapid wings.
The complexities of bird songs sort
into music and the violin thrum of bees,
and heart beats like sacred drums.
She breathes the new flesh of Adam,
imagines the tastes of honey and salt,
the touch of skin to skin.  She enters the world
already dripping in the white rush of dew.

All day her mind teems with how to do it,
how to bend the square of the weft without
breaking the warp? All day she schemes figures:
women washing clothes in a river, the shapes,
the colors they beat like flags against the sky.
A casual geometry laid on dripping stones
bleeding porphura, the liquid lapis of the sea.
Threads so saturated, they look wet in a picture.
All art being the art of deception, a lie,
a still picture of living motion for a shroud.

After her suitors have feasted on the fat
of young goats, their warm brains swilled
with green wine, they sleep right there
on the floor, arms flung, heads awry,
a fat buttock or thigh for a cushion—
a wallow of young men sated in a season
of plenty, flies buzz their blowing lips,
the plates of bloody bones.

Then through the greasy smoke she climbs
to her loom and shuts the door. Her dolos:
the difficult cunning simply to get here,
to stupefy distraction for a blank hour
of raw light,  baskets of color, the shuttles—
the music of flies a distant hum,
a swarm of bees in the yellow vineyard.

Tonight she will undo it.  Crimped threads
will grow finer, more easily tangled, harder
to work, colors richer with the oil of her fingers,
techniques subtler as she learns new ways
to hide knots, as she studies the motions
of women’s bodies and faces, until all the ordinary
work of washing looks like actual grace.

Each time she climbs the stair she is older, surer,
but it isn’t easy. She deliberately makes
and destroys beauty for an abstract truth:
against death, against the death of passion,
for a love like that.

Fully we are open now, not in bud, to the flower,
delicate or rich in hues still wet from the palette,
and large so as to make us see as we’ve not seen ever,
as ever we’ve not touched so the tenderness of the flower.
Only the tongue may be delicate enough to know
the shape of the flower, and strong enough to stroke
light from the throat of the flower, which stands
ready always to involve the lover of the flower.
She draws light from the eye and a motion of the whole
hand moves there before white of the oil-colored
canvas comes through, lilac on lilac and blue bursting
deep in the center where perception is lost it seems forever.
No irises I’ve ever looked at ever looked like these irises,
the ones you’ve given me, tall in the morning light of our room.

What finally have we come to know of flowers, blue irises
on a white bookshelf cutting shadows on a white brick wall?
We touch hand and lip to a dark purple elegance unfolding
not any flower but this one gorgeous one. And what more
might we learn as we rise once again from a table
and move (how do we know how we move?) quite together
through her book of One Hundred oils of fresh Flowers:
Jack-in-the-pulpit, amaryllis, and morning glory,
calla and poppy and canna, our iris among them?
Yet what could we know of flowers until we know
what flowers within us, a beauty beginning like a girl
simple (and difficult) as a flower, the colors as pure?
I kneel near you in these shadows, wanting more than ever to know
what flowers are true likenesses of flowers and what are flowers.

Creek spillage makes the pond.
Cattails and reeds flattened
and dried many seasons matted into rafts that fill in and float—
you can walk on it, your shoes going sometimes deeper
in the wet seeping up through the straw.

Beavers have made a lodge of sticks and logs.
You can see
marks of their teeth where they’ve cut clean and neat
the trunks of elms and made them fall, their white-pointed
stubs at the edge of the pond.

One tree, eaten down to pencil points
standing on each other,
still miraculously hasn’t fallen. The beavers are working
on a dam but we haven’t seen them. Something
has interrupted their progress.

Andy with her bag of paints and brushes
looks around
at the pond, then steps out in her L.L Bean duck shoes.
I walk into the woods to examine close-up the white-pointed
stumps of beaver chomps.

When I return from foraging,
pockets full of wood chips,
nuts, leaves, Andy has painted twenty or thirty cattails
with neon orange. I watch her painting. I wonder
what is her vision for this landscape?

I see the wit of it in her shoulders
as she dips
in the color-jar, the whimsy in her hand that arches
the brush like the beak of a hawk, stroking little nibbles
of paint on the tips of cattails.

I hadn’t noticed how sharp and tall they are,
like needles,
like spikes, like pikes on a battleground. Andy’s jacket
splattered and slashed many colors, speckles of paint in her hair,
a smear on her cheek.

She has made her mark on the pond. There, she has put it there.

I have been reading Richard O. Prum’s brilliant new book The Evolution of Beauty and am exhilarated to learn of Darwin’s discredited idea in Descent of Man, that beauty is an independent corollary to survival of the fittest and natural selection. Especially in his life-long observation of birds, Prum finds that beauty figures prominently in evolution, yes, as a significant factor in mate selection (females do the selecting! and that’s why male birds develop such gorgeous colors and patterns in their plumage), but also as an entity that has evolved itself from itself. Before Darwin solved the scientific problem of beauty (why does it exist?), he was so bothered that he wrote:  “The sight of a feather in a peacock’s tail, whenever I gaze at it, makes me sick.”  One desires the beautiful because one develops a taste for beauty, and all the senses to perceive it become finer and finer, to enjoy the pleasures of beauty for its own sake.  I too have a fascination with, a craving for the beautiful, beauty as essential balm, as stay against ugliness and aggression, against mere fact and reason. Take sentimentality away, you may, but not beauty. 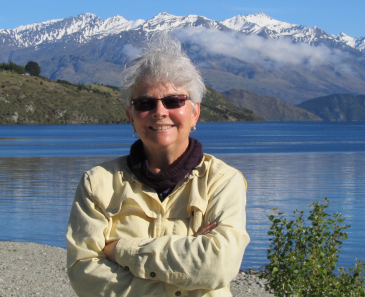 Idris Anderson’s second collection of poems Doubtful Harbor was selected by Sherod Santos for the Hollis Summers Prize, published by Ohio UP, March 2018. Her first collection of poems Mrs. Ramsay’s Knee was selected by Harold Bloom for the May Swenson Award, published by Utah State UP. She has won a Pushcart, a Pushcart Special Mention, and the NY Yeats Society Poetry Prize. She has published poems in AGNI, Crab Orchard Review, Hudson Review, Michigan Quarterly Review, Plume, Southern Review, and other journals. She has held grants from NEH to study lyric poetry with Helen Vendler at Harvard, Greek tragedy at Stanford, and Virginia Woolf in London. She has a PhD (in Shakespeare) from the University of South Carolina and an MFA from Warren Wilson. She was born and grew up in Charleston, SC and moved to the San Francisco Bay Area two decades ago.  More at: silvertrout.net