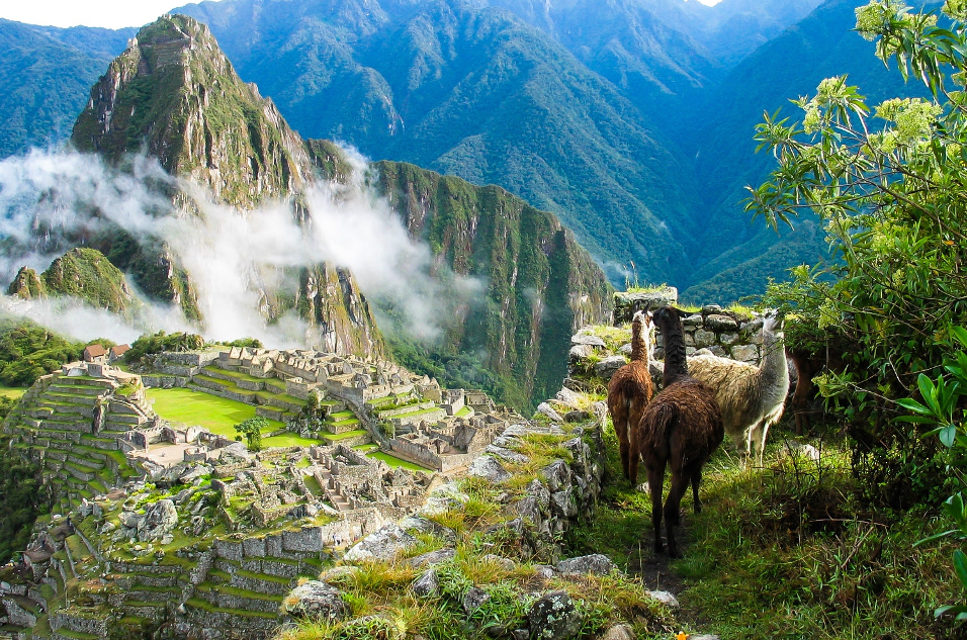 “How about if I get tickets for the Dave Brubeck concert next month,” said my boyfriend.

Tim looked puzzled.  “Where are you going?”

“Machu Picchu beckons.”  I answered, smiling.  “Want to go with me?”

“You bet,” said Tim enthusiastically, “riding the rails to visit the ancient Inca archaeological site is a once in a lifetime journey!”

“Luckily, you’ll have a Spanish-speaking private tour guide along!”  I said heartily.

We kick-off our epic journey in the historic city of Cusco, the gateway to Machu Picchu, in early May, and before the hordes of tourists from around the world.  Founded in the twelfth century by the Incas, Cusco was conquered by an army from Spain in 1533.

“Why are police on board?”  Tim asked, as we climb aboard and settle into our seats in the passenger car.

“Oh, yeah, it’s nothing to be alarmed about,” I chuckled and whispered.  “Tourist police are not only visible everywhere in Cusco but they also travel on the passenger cars to the ruins.  In the event a passenger suffers soroche, altitude sickness, during the three-hour train ride, the police assist porters and crew trained in first aid and emergency preparedness to administer oxygen.”

“Good to know,” he muttered.

“Were you visualizing tourist police coming to the rescue during a Wild West-style train robbery by a band of leftist rebels while en route to ancient stone city perched in the mysterious cloud forest?”

Tim laughed.  He took my hand and kissed it.

As the sun rises over Cusco’s rooftops, the bell ringing, whistle-blowing train departs and slowly climbs through ‘El Zig-Zag,’ a series of five steep and dramatic switchback turns, out of the city and into the hillside dotted with clusters of small adobe houses with red tile, straw, or corrugated metal roofs.  Although the zigzag on the narrow-gauge line is a time-consuming process, it’s the easiest way for the train to begin its descent down the mountain to the Sacred Valley and continue down to Machu Picchu.

Chugging along, the snow-capped peaks and verdant green fields with new crops dazzle us.  The modest houses and little shacks we pass look a bit rough and unfinished.  People smile and wave at the passing train.  They seem unfazed by the tourists with cameras flashing and capturing them as they go about their daily life.

Before long, Tim and I feel like seasoned train travelers on one of the world’s most scenic train journeys.  We see farmers, atop the metal roofs of their adobe houses or in their fields, spreading corn for the sun to dry.  Women and children tend animals nearby.  We pass colorful tiny sleepy towns and villages; its like taking a step back in time.  Small herds of llamas and sheep are grazing on mountain grasses and wildflowers.  Snaking its way through the Sacred Valley beside the train tracks is the fast-flowing Urubamba River.  The springtime scenery with bright and sunny skies on our leisurely jaunt on the narrow-gauge railway is spectacular.

Looking a bit puzzled Tim said, “I’ll be darned!  I’ve seen metal roosters and crosses on rooftops before but not ceramic bulls.”

I laughed.  “Welcome to the cult of the Peruvian bull ornaments, toritos de Pucara. People in the Andean highlands believe the toritos bring prosperity, happiness, fertility and keep homes safe.”

Then, turning to me, he asked, “But why are they on rooftops?”

“In order to honor Pachamama, or Mother Earth, and to have the best view of the spirits of the mountain gods, the pair of toritos are placed high up on the roof of a new house when the home is built.”

I continued.  “It was the Spanish conquistadors who among many things brought bulls to Peru during their conquest, and they became a part of the Inca culture.  What I find fascinating is that more than five centuries later the indigenous people in the Andean highlands are keeping the mysterious toritos de Pucara ornaments tradition alive.  The colorful ceramic bulls are part of Peru’s cultural heritage, and among the favorite folk-art souvenirs of the tourists.”

Some three hours after leaving Cuzco, having soaked in the stunningly beautiful and impressive landscape, we reach the Puentes Ruinas train station, the end of the rails and our destination.  Looking up the mountain from the valley, we can see no evidence that Machu Picchu, built on a ledge between two peaks of the Andes Mountains, even exists.  To get from the train station to the ruins, we can hike up a steep footpath or board buses that will take us to the archaeological park entrance.  Tim and I didn’t feel like making the hike, so we chose to ride the bus.

Tim laughed.  “That’s an understatement!  I am thrilled to be here and gracias for letting your gringo boyfriend tag along!”

From the entrance of the ruins, once hidden by five hundred years of jungle growth, until discovered by Hiram Bingham in 1911 when a Quechua boy led him to the site in the jungle, Tim and I follow a narrow dirt path and we’re stunned by what we see.  We stop to feast our eyes on one of the most spectacular archaeological sites in the world and to photograph the ancient granite stone city.  Nearby a small lizard suns itself on a rock, while a giant hummingbird sips nectar from wildflowers.

We walk up narrow flights of ancient granite stone stairs to the highest point, the Intihuatana, the Hitching Post of the Sun, a ritual stone.  While Tim photographs the stunning sculpture, the haunting music of the beautiful quena flute floats through the once lost Inca city in the clouds.  The flute player is a young Quechua boy tending his family’s grazing herd of llamas nearby.

Tim and I climb the steep steps and cross ancient agricultural terraces to the Watchman’s Hut where we are treated to a spectacular and breathtaking panoramic view of the entire city!

We walk down to the archaeological park entrance to catch the bus to the train station.

A Quechua boy dressed in colorful local attire races our bus 2,500 feet down the mountain from Machu Picchu to the valley below to get tips.  He wins!  Smiling and dripping with perspiration, the boy stands and waits for our bus to zig-zag down the mountain.  Tim and I clap and reward the 10-year-old chaski, runner with a tip.

Watching the sunset on our return journey through the sacred valley of the Urubamba River, Tim and I remember the morning mist weaving its way through the steep hillsides of jungle; and, the haunting musical notes of the young Quechua llama-herder’s quena floating through the ancient Inca city once lost in the clouds.

Tim put his arm around me and spoke softly.  “What an unforgettable journey!  I’ll cross-off Machu Picchu from must see awe-inspiring archaeological sites on my world travel bucket list.  So jazzed my tour guide returned for another visit.”

I have travelled all over the world and visited more than 30 countries to gather material for my stories and articles.  I undertake a project because I want to immerse myself in the subject, learn more about it, and take my readers on a journey with words.  I don’t think writing is ever effortless.  Sometimes the characters just pop onto the computer screen and story seems almost to write itself.  Other times, coming up with a new idea is a bit of a struggle, or maybe it’s the challenge of putting the words together to paint a picture.

During these times, I go for a stroll in nature and make my way down the hill to the Riverwalk.  The stunningly beautiful and picturesque waterfront is the crown jewel of Astoria, the quaint little historic town where the Columbia River meets the Pacific Ocean, and the oldest settlement west of the Rockies at the end of the Lewis and Clark Trail.  Whether I am experiencing the beauty of dramatic sunset clouds underneath the Astoria-Megler Bridge or gulls surfing with the wind or barking sea lions frolicking upriver or cormorants atop pilings or a stunning double rainbow after scattered showers, I look forward to an intimate rendezvous with nature along the scenic river trail.  Nature is where I go to reflect and feed my soul.

What a joy to have nature out my front door and experience Astoria’s natural beauty — the perfect place for my thoughts to wander and my imagination to fly. 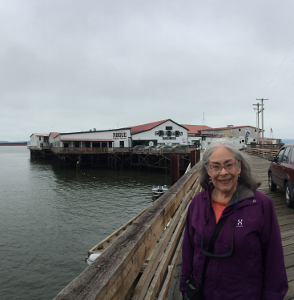 Katacha Díaz is a Peruvian-American writer. Among the children’s books she has authored is Badger at Sandy Ridge Road for the Smithsonian Institution’s Backyard series.  Her writing has appeared or is forthcoming in The MacGuffin, Cecile’s Writers, New Mexico Review, Route 7 Review, The Galway Review, Coastlines and elsewhere.  Katacha lives and writes in a quaint little historic town at the mouth of the Columbia River in the Pacific Northwest.